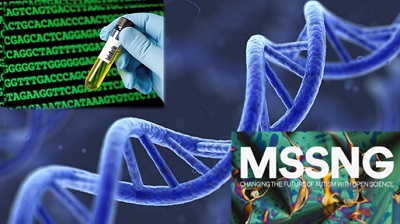 In a new study, an international team of researchers used the power of whole genome sequencing to discover a previously hidden type of genetic change associated with autism. They also discovered that these rare structural variations are inherited almost exclusively from fathers – for reasons yet to be discovered.

The report appears today in the journal Science.

“These unexpected findings broaden our appreciation for the enormous diversity of ways that autism develops, and in doing so, hold promise for the development of personalized therapies and services,” says Autism Speaks Chief Science Officer Thomas Frazier. “This study also illustrates the importance of the detailed, comprehensive research made possible through whole genome sequencing.”

The researchers analyzed the complete genomic sequences of 9,274 people in families affected by autism. The vast majority of these people had contributed DNA to the Simons Simplex Collection or the Autism Speaks MSSNG Whole Genome Sequencing Project.

The researchers linked increased risk for autism to rare structural changes (deleted or duplicated DNA sequences) in the still-mysterious “noncoding” region of the human genome.

This region makes up 98 percent of our DNA. It lies outside the 2 percent of our DNA that makes up our genes. (Genes “code,” or spell-out directions, for creating proteins. Proteins, in turn, control the development and activity of every cell in the body.)

Until recently, researchers largely ignored the noncoding portion of the genome, and some even dubbed it “junk DNA.” We now know that noncoding DNA plays a crucial if incompletely understood role in directing when and where our genes switch on and off. This precise coordination of gene activity is particularly crucial for brain development and function.

Still, a role for non-coding structural variations, like the duplications and deletions identified in the new study, had not been widely investigated until now. This was due, in part, to the difficulty of detecting these variations and their effects.

The research team developed a new method for analyzing whole genome sequences that allowed them to both detect the rare noncoding structural changes and identify which ones disrupt the regulation of gene activity and contribute to autism.

“This represents an important step toward understanding how variation in the ‘switches’ that turn genes on and off influence the development of the brain and risk for autism,” says senior study author Jonathan Sebat, of the University of California San Diego School of Medicine. “Still larger studies could help to identify specific switches that are important and could significantly improve the value of [whole genome] DNA sequencing in the clinic.”

From basic science to applications that improve lives

The goal of clinical genome sequencing for autism is to guide the development of personalized plans to address each person’s needs for treatment and/or support services. This is particularly important for the many subtypes of autism that are accompanied by serious medical problems and cognitive disabilities.

“This kind of analysis can only be done using whole genome sequence data and is, in part, why we created MSSNG,” says study co-author Stephen Scherer. Dr. Scherer is the research director of the Autism Speaks MSSNG program. He also directs the Centre for Applied Genomics at Toronto’s Hospital for Sick Children (SickKids) and the McLaughlin Centre at the University of Toronto.

“Understanding different types of genetic variants is vital to understanding the biochemical pathways that underlie autism,” adds Dean Hartley, Autism Speaks senior director of discovery and translational science. “Once we understand a given pathway, we can design personalized interventions that support or change that pathway to increase a person’s quality of life.”

Blog
Teacher Turned Journalist Reports on Autism in China
Blog
Books about autism
Science Blog
Why does it take brains to understand autism?
Science News
World’s largest autism genome databank adds more than 2,000 sequences
Science Blog
Autism and ADNP syndrome: A genetic search and a biomarker discovery
We're Here to Help Chat with Us
Autism Response Team Chat
There are no available agents at the moment.