It might seem like Boston is ignoring us or could care less about the world around him, but I promise you he IS listening, he IS observing and when HE is ready, you will be welcomed lovingly into his arms and in those arms is the very best place. 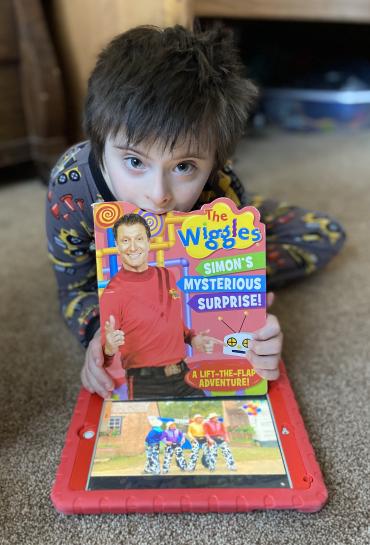 Meet Boston. This 11-year-old loves watching The Wiggles on his iPad, swinging on his swing and is a huge fan of rice milk. Like many other kids his age, haircuts, bath time and shirts with scratchy tags… not his favorite. Boston also has Down syndrome and autism.

Boston’s mom, Kelly, says even though her son is dually diagnosed, both diagnoses came somewhat unexpectedly.

“Boston came at 30 weeks, weighing 2.3 pounds. He was in the Neonatal Intensive Care Unit (NICU) for 80 days. He was so tiny that no one saw any of the typical Down syndrome (DS) features. A full genetic panel was done at six weeks to rule out Rett Syndrome - which his big sister has - and we were surprised completely with the Trisomy 21 discovery. As far as his autism – he wasn’t diagnosed until just before his fourth birthday at our annual Down Syndrome Clinic appointment in Indianapolis.”

Traditional thinking held that autism was rare in people with Down syndrome, but that is far from the case. According to the Down Syndrome Resource Foundation, it’s estimated that autism in people with Down syndrome is 10-25 times more common than in the typical population. Children with a dual diagnosis are also often at a disadvantage in their development and education, even relative to children with only one of the diagnoses. That’s why when Boston was diagnosed with autism, Kelly immediately searched for resources to help her son reach his full potential.

“I was sad when we received the autism diagnosis, and if I am being honest, I was mad. My sweet boy had already struggled so much in the first few years of his life and now this added diagnosis meant more struggles for him and more heartache for me.”

“On the other hand, it helped explain some of the behaviors/delays we were seeing, as well as started us down the path of applied behavior analysis (ABA). Boston and our family have had the best possible experience with the programs/centers that we have been involved with.”

Learn more about Boston through the words of his mom, Kelly, in this Q&A: 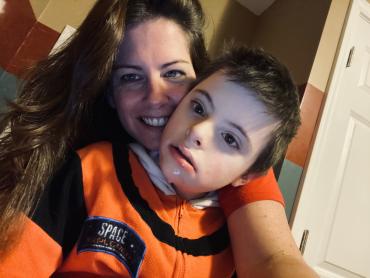 What led you to getting your son, Boston, evaluated for an additional diagnosis of autism?

I honestly think one of the early concerns I had was his hearing, I noticed he wouldn’t respond to his name, despite passing all hearing tests. This seemed to also carry over to following commands (of course we soon discovered he could hear “The Wiggles” on the TV from three rooms away and come running!). The Wiggles have been a high motivator from the very beginning!

Between the preemie status and DS, missing speech milestones did not immediately raise red flags because he sat, crawled, stood and walked much later than his peers, but did ultimately meet those goals. He also struggled with eating yet passed all of his swallow studies and chewed on everything except for food. We knew he had some oral motor issues but were not sure where that fell within autism concerns.

He had begun to line up his toys and was not really developing typical play behavior. Looking back at old photos and videos I can now also see his obsession with his hands and toys that light up, both we now know can be early signs.

In what areas has the co-occurring diagnosis caused struggles?

Communication is absolutely the greatest struggle for us. Boston is completely non-verbal. We have worked with low-tech systems like Picture Exchange Communication (PECS) and high-tech devices like the CoughDrop app on his iPad. This work will absolutely be on going his entire life. The more he can communicate his needs, wants, feelings, etc., the greater quality of life he will have.

Eating is also a continued struggle for Boston. At 11 years old, he still only eats pureed foods and will only drink rice milk. Don’t get me wrong - the kid eats healthy for sure - I love how nutritious I can make his meals but sometimes you just want to hand the kiddo a chicken nugget! (I know my fellow moms can relate!)

Sensory issues infiltrate almost every aspect of life. One that comes to mind is haircuts. They are a NIGHTMARE. The sound and feel of both scissors and clippers are unbearable for him. Other self-care things too like potty training, brushing teeth, clipping fingernails and toenails are very difficult. There was a time that even the running water of the bathtub was too much for him! Certain shoes are uncomfortable, clothes, tags, the noise of certain toys. It can all be too much. 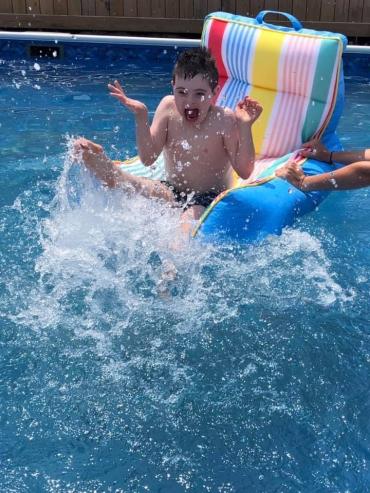 How would you best describe Boston?

Boston is his happiest at home with family who he knows and loves/trusts. He loves watching “The Wiggles” on his iPad - they are absolutely his favorite thing followed closely by swinging on his swing, bubbles and swimming when it is warm enough for that! He still finds calm in lining things up like his books and blocks from time to time.

What support systems have helped you navigate Boston’s diagnoses?

It's tough because it becomes very apparent how greatly adding autism into the mix changes things. He is so different from his peers with DS, yet he is also not like his peers with autism. It's like we did not belong anywhere. Until I stumbled across the Down Syndrome-Autism Connection; it was like coming home after a long, stressful journey. I had found my people, my family. The family support page has been so good for my soul. I was finally reading about kiddos just like mine - struggling with most of the same things! I finally felt like we had a place that we belonged.

What is something you could tell the world about someone with co-occurring down syndrome and autism that it may not know?

It might seem like Boston is ignoring us or could care less about the world around him, but I promise you he IS listening, he IS observing and when HE is ready, you will be welcomed lovingly into his arms and in those arms is the very best place.

Podcast
Adulting on the Spectrum: Finding my calling helping the autism community

Podcast
Adulting on the Spectrum: Realizing my autism after my child’s diagnosis