Why I will never stop trying to help my autistic son

"He and his brother are my life. I will always try to create an oasis of happiness and peace for them both. And until the day I die, I will never stop trying." 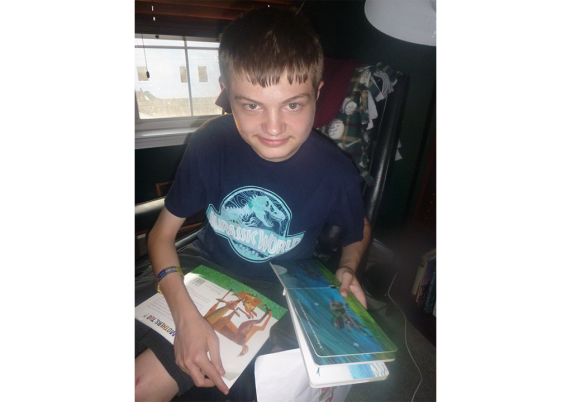 A few weeks ago I was scrolling through Facebook and happened upon one of my old posts, which was being reposted on the Autism Speaks blog and Facebook page. It was a piece entitled “Dear Future Caregiver of My Son with Autism,” and was a letter to future care givers about my boy and my hopes for his life. For the most part it went over well, although truth be told I don’t often read the comments on my pieces. I rarely learn from the negativity, and often the commentators are “trolls” who upset other readers who come to my defense, and generally I’m just not into the futility of it all. I began writing this blog over nine years ago after my second son was diagnosed, and I’ve learned over time how to deal with criticism. I write for me, and for any reader who can take comfort in my words and realize he or she is not alone.

The piece received about a hundred comments; I skimmed through them and all seemed well until I hit the last one.

The writer said: “She didn’t try. She tried to change her son when there was not anything wrong with him to begin with,” which I believe was in response to the paragraph I wrote below:

I want you to know we tried. We finally got him to crave sleep (that one took a few years, yes you can thank me now), to eat things that weren’t carbs including two veggies (that one’s going on my tombstone, I am still so proud), to learn how to dial back some of the innate aggression that occurred when he didn’t get his way. We taught him to use a fork (okay, sometimes) and to understand that leaving the house is often fun, and should last more than thirty-seven minutes. I encouraged him to go on errands with me and not try to purchase everything he saw (just a heads-up, that will not work at Walmart or Toys R’ Us, be warned).

It also may have been in response to my commentary regarding how difficult it could be to keep him from carb overload, that when his DVDs are defunct he can be intractable in his desire to keep trying to play them.

I’ll never know for sure which was this specific reader’s complaint; perhaps it was all of it.

As I’ve mentioned I generally do not respond to commentary left on Autism Speaks or on my blog, as I feel strongly my time can best be spent elsewhere, but I felt I had to respond to this. I’m doing so in complete honesty not because I’m upset.

We’ve been an autism household for over sixteen years now, there are many other things far more upsetting to deal with than this. I’m responding because my take on this commentary is that I should be shamed for trying to make his life better.

And I will not remain silent about that.

I will proudly say I have tried to change some of his behaviors since he was diagnosed, all in the cause of turning a child who was suffering from sleep deprivation, gut issues, transportation fears, a desire to only eat carbs, and sometimes aggression into one who revels in his life and is happy. I did try, and will continue to try to give him the best life possible, and not just for him, but for the rest of his family too.

There is nothing wrong with my severely autistic son - I love him for who he is.

When you’re a parent however, and you see your child suffering, I believe we have a moral imperative to try to ameliorate that suffering.

So reader, you’re right about this. I tried to change my son into someone who sleeps, because that’s best for his health and for the health of the rest of his family.

I’ve tried to teach my son limits regarding snack foods and introduced vegetables, because that’s what’s best for him.

I tried desperately to eliminate his aggression so he could thrive, and in this I am proud to say we are mostly successful.

And yes, I’ve worked very hard to change his tolerance to the outside world, not just for him and our family in the present, but for the future and those taking care of him for forty years when I’m dead.

We are not rich. Justin will not have “Rain Man” accommodations someday. He will not have family to care for him, and will be in a group home, and will have to go out some days. I know this because I worked in one for several months, and sometimes the entire group just has to go. I worked hard on building his tolerance to the outside world because folks, I am a planner, and while I see the boy in front of me I also see the man to come, the man who will be living with people barely paid to take care of him, who most likely won’t love him.

I have worked desperately hard to help him become a joyful child who will be as easy as possible for his future caregivers so they can meet his needs when I’m in the grave.

I did try. I tried not to change the fundamental core of who he is, but instead to give him his best life possible. I will continue to try to give him a life he loves, to keep him safe, to push his limits so he doesn’t miss out on anything that could bring him pleasure.

He and his brother are my life. I will always try to create an oasis of happiness and peace for them both.

And until the day I die, I will never stop trying.