How My Family Faces Roadblocks

Jane Springer is the grandmother of twins, one of whom has autism. In the post below, she explains how her family has overcome roadblocks they have faced on their journey with autism. Jane is a certified life and wellness coach who helps parents and grandparents of children on the autism spectrum. For more from Jane, check out her website here.

With a child with autism, roadblocks can come in different forms – behavioral and  bureaucratic are two that come to my mind.  Here are some examples of how we have dealt with them. 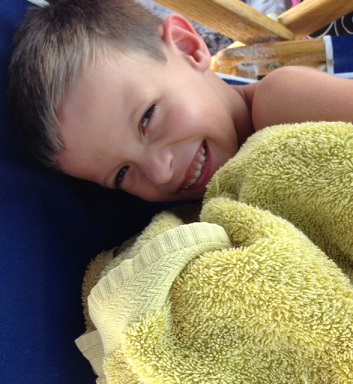 We are now in the middle of a new phase of behavioral roadblocks in my grandson.  He just in the past few months has become very obstinate.  He is pushing boundaries, saying “no!” a lot, and putting his foot down with a line in the sand.  He doesn’t want to watch a particular show. He doesn’t want to get his face wet in the pool. He doesn’t want to leave Nana’s. He doesn’t follow directions in his riding class, etc. A special educator associate of mine asked me if he had gone through this phase when he was two.  When I told her no, she said this is probably his delayed trip through the terrible two’s, only he is six!

He is realizing he is separate from his parents and grandparents and this is a normal part of his growing up.  He has to go through it.  I never thought of this.  The way to deal with it is the same as if it were a two- or three-year-old, only geared toward a child more his age.  Consequences for bad behavior, boundaries and rewards for good behavior.  Earning electronic time for good behavior and doing chores is working great, with a chart on the wall to note his accomplishments.  He loves his iTouch with games on it, so gaining or losing time on it works really well.

I mentioned in a previous blog that he loves to ride elevators.  He can gain or lose the privilege of riding an elevator based on his behavior.  Ignoring his outbursts sometimes works.  We just proceed with what we are doing and do not acknowledge what he is doing or saying.  Distraction and redirection to get him out of where he is stuck is effective, too. We may ask him an unrelated question, start a different activity or offer him something to eat and he pops out of it.

I think the important thing to remember is that he is going through these growing up stages on a delayed schedule from typical kids, that he is on his own journey and we just love him through it, even though it is difficult at times. 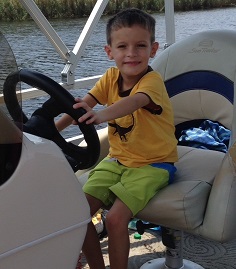 There are so many trips and roadblocks that can come up in this area, like dealing with insurance companies, doctor’s offices, special education evaluators, school administrators, guidance counselors and teachers and more.  Perseverance is what works best, we have found, but it is so tiring sometimes!!  Sometimes, you just have to keep at it, until something gives.

Case in point.  My grandson was in a preschool class for three- and four-year-olds at his elementary school, made up of half typical and half children with autism and other challenges.  He got lots of individual attention, speech and occupational therapy.  When it came time to enter Kindergarten, his teacher supported him going into a regular classroom with an aide, which is what my daughter wanted as well. The principal was on board, too, based on what his teacher had said.  But school officials said they did not have the budget for that and suggested a special-needs-only class or another elementary school with a special class for children with autism. My daughter did not want either of these options (a roadblock), so her team (the speech and occupational therapist, plus his pre-K teacher) regrouped and came up with an IEP plan that had lots of supports, including preferential seating, a behavior modification plan, options to test in a small group setting, etc. At the follow-up meeting with the school district and elementary school representatives present, there was more discussion and the school officials reversed their recommendation.  My grandson went into a regular kindergarten class.  He had an amazing teacher who worked with him and he thrived there.  Yes, he had some days where he struggled, but most typical kids have those days, too.  He will be in first grade this fall.  Sometimes parents of any special needs child have to fight for their child, but they also have to work together as a team with the teachers, support staff, etc. to come up with a solution that can work for everyone.

I tell this story to encourage parents and grandparents not to give up when challenged with a roadblock, to persevere when discouraged, and to stand up and face those obstacles, even when you are dead tired and frustrated. Your precious child is so worth it and they need you to be their advocate, their voice in the world.

Roadblocks can be overcome!