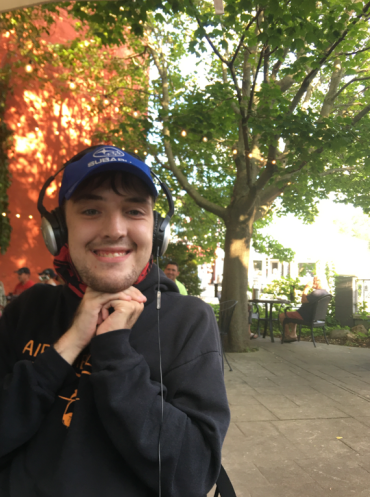 Jeff B., age 25, faced some headwinds when he was diagnosed with autism, epilepsy and global developmental delay at age 4. Through genetic testing and participating in an Autism Speaks MSSNG study, his family found that he has a genetic marker linked to his three diagnoses, as well as an inherited genetic mutation that can cause heart problems later in life.

But none of these diagnoses have stopped him from growing into the funny, social person that he is today. While Jeff is still working on his conversation skills, he loves talking to people about foods from around the world and his special interests. With the help of his day program and supportive family, he is learning the skills he needs to work a part-time job in his community and meet his goal of one day living independently.

In this Q&A, Jeff’s mom, Vicky, shares her son’s journey and talks about how genetic testing helped their family. 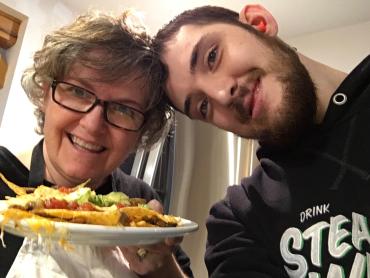 Can you tell me a bit about your son Jeff?

Jeff is my baby, even though he’s got a beard and he’s 6 feet tall. He was diagnosed at about age 4, and the diagnosis was complicated because he has developmental delays and a seizure disorder as well. When he was little, he was super active and loved climbing, dinosaurs and trains. These days, he likes computers, dinosaurs, LEGO, Roblox and national anthems.

What are some of Jeff’s biggest strengths and challenges?

Jeff struggles with back-and-forth conversations and not taking up all the air in the room. He didn’t talk until he was about 4, but now he can talk for hours without taking a breath. A lot of it is surface-level chatter focused on his special interests, or he’ll ask someone a question but not wait for the answer. We’ve been working on that, but he is super interested in communicating with other people, so that’s a huge strength for him. And he loves food, so he will talk to anybody about international dishes and foods. He’s found that everybody’s interested in food to some extent, so it’s a universal topic of interest. He has a great sense of humor and knows so many things that he’s always surprising people. 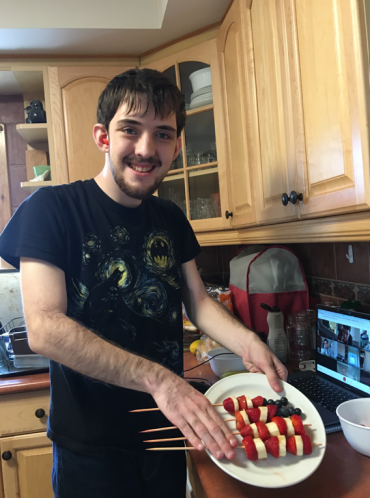 What were the first autism symptoms that you noticed?

Jeff was born with the cord wrapped around his neck, so there were concerns right from the beginning. His pediatrician kept an eye on his milestones and he got referrals for speech and language therapies at an early age. I wasn’t sure about his autism at the beginning because there was so much happening with him, but one of the first things that concerned me was that if he got upset, he’d smash his head on the floor. He was not able to self-regulate his mood at all, and that was really disconcerting.

What motivated you to seek genetic testing and get involved with the MSSNG program?

We were already connected with the genetics department at The Hospital for Sick Children (SickKids) in Toronto because they were looking at a few different disorders that Jeff might have. He did genetic testing when he was about 3, so when SickKids contacted us about contributing our data to a MSSNG study, we were definitely interested.

Part of the reason my husband and I decided to be part of this study is that I work with kids with autism and it’s very important for us to help the greater community and contribute to the pool of knowledge. We’re also science geeks, so we wanted to contribute to future research and the development of treatments that haven’t even been thought of yet.

What did you learn from the genetic testing?

We learned that Jeff has a genetic marker in the TRAAP gene that is linked to his autism, his developmental disability and his seizure disorder. The TRAAP gene is an executive gene that tells other genes what to do. We also learned that his genetic mutation wasn’t inherited but is a “de novo” genetic error, meaning it cannot be passed down. It was a relief to know that this was a fluke and wasn’t inherited from me or my husband—knowing that we couldn’t have done anything about it made us feel a little better about the situation.

The testing also revealed that Jeff and I carry an PKP2 genetic mutation that can cause heart problems. As a result of these findings, we tested my other son and found that he has this cardiac issue as well. We were able to catch it ahead of time, and now he’s on medication so that he can manage his situation as he gets older and slow the disease. For him, that’s been absolutely life changing information that we would not have gotten without the MSSNG study. 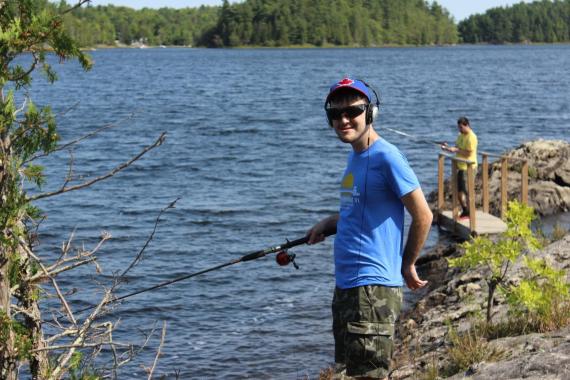 What are your hopes for Jeff’s future?

Jeff is still living with us and going to a program for adults with special needs that offers job training, life skills and transportation skills training. We’re hoping that eventually, he’ll be able to share a condo with a roommate and get some support at certain times during the day. He would like a job in retail, or I could see him being involved in a community center where people can get to know him.