“We believe strongly that it should be a requirement in the U.S. for every kid to have coding before they graduate from K-12.” -Tim Cook, Apple CEO 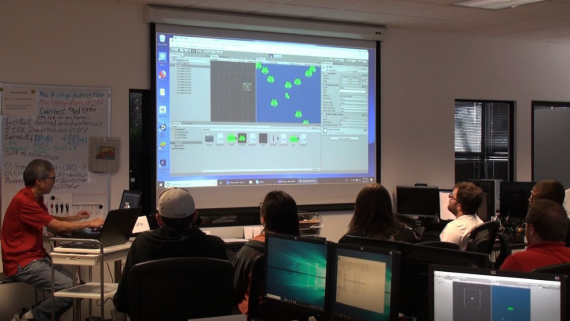 There is an increasing demand for talent in the San Diego technology industry. The unemployment rate for technology jobs in San Diego is at an all-time low of 1.8% with an estimated 20,000 new jobs expected by 2030. In order to meet the present and future demand for technology jobs, there is an increased need to give all students, especially those with autism, the STEM education and experience they need. Many people with autism are uniquely suited to careers in technology due to their ability to hyper-focus, attention to detail, heightened pattern recognition and natural aptitude in the field.

Thanks to the Autism Speaks grant program powered by GameStop, the National Foundation for Autism Research (NFAR) was able to offer its first C# Coding Class for teens, NFAR Codes, specifically geared toward young adults with autism in San Diego! This class was designed to provide exposure and enhance interest in coding and technology as possible career paths.

Each of the participants created a 2D space invaders game, learning basic programming of C# language within the Unity environment. Participants learned how to define variables and variable types, loops and if statements, one- and two-dimensional arrays, as well as mathematical, relational and logical operators in a Unity game engine. In addition, they learned to program game characters, adding complex behaviors, and scorekeeping. Next, they developed a more complicated 2D game of Super Mario.

At the end of the class, participants walked away with video games that they created, an increased awareness of technology careers and, for several, a desire to pursue those jobs in the future. One NFAR Codes student went on to study another programming language, two enrolled in NFAR’s technical training programs and all learned new skills that will enhance their resumes regardless of their future employment goals.

We are so thankful to Autism Speaks for this opportunity to teach these amazing individuals to code!

Blog
Autistic people like me just want a chance to succeed

Life on the Spectrum
A day in the life: Sandy’s schedule adjustments to navigate the new school year

Life on the Spectrum
Spreading my wings in the workplace