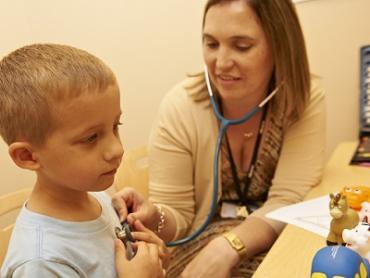 NEW YORK -- In a test of universal screening of children using a standard autism screening tool in a pediatric care network, researchers found that the tool was less accurate in the clinical setting than research settings. However, children who screened positive on the measure received diagnosis an average of seven months earlier than those who screened negative.

The study, published today in Pediatrics, found this version of the MCHAT, or Modified Checklist for Autism in Toddlers, was particularly less accurate in screening children from traditionally underrepresented groups.

According to Autism Speaks Chief Science Officer Thomas W. Frazier, PhD, taking the MCHAT can still be a valuable first step, despite these findings.

“In combination with a child’s overall developmental screening, the MCHAT can help parents and providers understand whether a full evaluation for autism or other developmental issue is needed. This can then lead to earlier intervention and, ultimately, better outcomes for your child,” Frazier said.

Concern about autism? You can take the MCHAT online.

The MCHAT is a brief questionnaire that general practitioners, parents and other nonspecialists can use as a way to screen children who might have a concern for autism or developmental delay. It is one screening tool that can be used to screen for developmental delay, as recommended by the American Academy of Pediatrics to occur at 18 and 24 months.

Children in the pediatric clinical network affiliated with the Children’s Hospital of Philadelphia were screened with the MCHAT-F, which includes a follow-up screening, along those guidelines.

The MCHAT had a sensitivity of just less than 40 percent across this clinical population, which included more than 25,000 children regardless of a concern for developmental issues. This is a measure of people with autism who are correctly identified as having autism. Previous studies in research settings have demonstrated sensitivity of as high as 58 percent.

Its specificity was nearly 95 percent, meaning children who do not have autism were correctly identified by the MCHAT as not having the condition. In research settings, the MCHAT’s specificity has been reported as slightly higher than 95 percent. Specificity was lower in minority children, meaning that there were more false positives for these children.

“Knowing that there are disparities in how our screening tools identify children with a concern for autism can help researchers improve those tools and reduce those disparities,” Dr. Frazier said. “We need to continue to look at ways to reduce the delay in diagnosis for children of color and children in low-resource households.”

By testing the MCHAT as a universal screener in an urban and suburban clinical network, researchers were able to gather data on a group of study participants that is much more representative of the broader population than is generally found in research studies.

The children in the study were nearly evenly split by gender, and more than half were children of color. Forty-five percent were on public insurance or Medicaid. This study also confirmed that national prevalence estimates of about 1 to 2 percent appear to be consistent.

“This study helps us understand that we may be missing these kids, which gives us a roadmap to improving our tools and guidelines,” Bennett said.

The study also demonstrated how clinical data collection can be used to inform and answer research questions, while also benefitting families and children who receive the universal screening as part of their routine care.

“The MCHAT is one screening tool that you or your child’s doctor can use to understand how your child is growing,” said Frazier. “If you have concerns, you should always mention them to your child’s doctor. A full evaluation can provide more information, a definitive diagnosis, and a way forward to get your child supports he or she may need.”