Do you have a child with autism and a new baby? 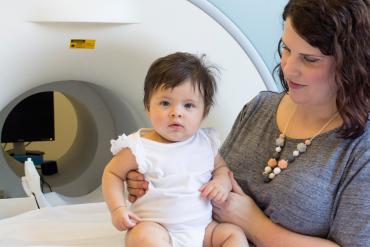 The Infant Brain Imaging Study (IBIS) is looking for participants!

In the last decade, IBIS researchers have identified brain changes as early as 6 months of age in infants who go on to develop autism. In two separate studies using findings from brain scans (MRI), IBIS researchers were able to predict with 80 percent accuracy which high-risk babies (those with older siblings with autism) later develop autism by two years of age.

The findings potentially possess extremely important implications for early detection and treatment of autism. If our previous research is replicated, IBIS researchers will be able to better identify infants who are likely to develop autism. Identifying those infants at high risk for autism sooner would allow us to begin to study interventions in infancy, which might have a major impact on decreasing certain symptoms of autism before they appear.

Therefore, it is critically important that these findings are replicated in a new study. Fortunately, the IBIS network has received a new grant to study 250 infants with older siblings with autism at five major Universities around the country.

The only problem is – how to find infants to participate in this study!

We are now seeking to enroll families who have a child with autism AND a new baby – an infant sibling 6 months old or younger. Study sites include Children’s Hospital of Philadelphia, University of Minnesota in Minneapolis, University of North Carolina at Chapel Hill, University of Washington in Seattle, and Washington University in St. Louis.

The study involves developmental evaluations and MRI scans of your infant’s brain performed at 6, 12, and 24 months of age. Your family will receive reimbursement for study related expenses and compensation for participating. Travel arrangements can be made for families traveling from further distances.

To learn more about participating in this study, please contact a study coordinator at your preferred site or www.ibis-network.org.

FOR IRB USE ONLY