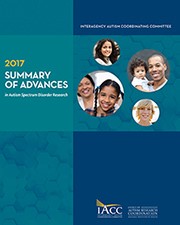 The Interagency Autism Coordinating Committee (IACC) has published its annual list of the past year’s highlights in autism research – 2017 IACC Summary of Advances in Autism Spectrum Disorder Research.

Eight of the “Top Twenty” reports came out of studies supported by Autism Speaks, either directly through research grants or through the Autism Speaks Autism Treatment Network (ATN) in its federally funded role as the Autism Intervention Research Network for Physical Health (AIR-P).

The twenty scientific papers spanned the broad range of autism research, including new findings on:

* early brain development in infants at risk for autism

* the interplay between genetic and epigenetic effects in autism

* the brain and behavioral effects of parent-led, play-based interventions

* improved understanding of the benefits and limitations of the behavioral and diagnostic scales used by clinicians when diagnosing and meeting the needs of people who have autism.

“Autism Speaks is proud to have supported these ground-breaking studies in its commitment to being a catalyst for research breakthroughs that improve the lives of people who have autism,” says Autism Speaks Chief Science Officer Thomas Frazier. “This work is truly made possible by the passion and generosity of our volunteers and donors.”

The selections supported by Autism Speaks include:

For more information about the IACC’s publications and activities, visit www.iacc.hhs.gov.

Science News
Identical twins with autism differ significantly in severity of social traits
We're Here to Help Chat with Us
Autism Response Team Chat
There are no available agents at the moment.