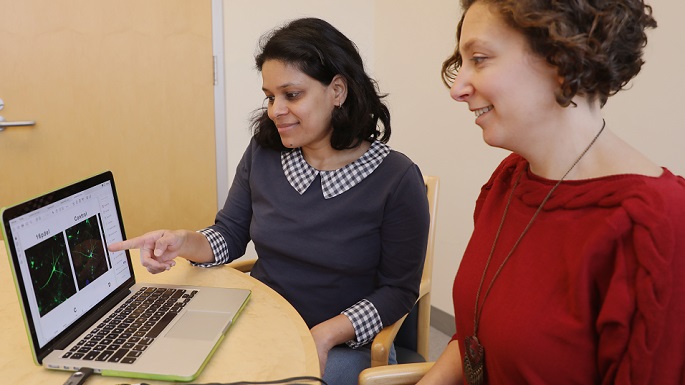 By Autism Speaks Meixner Fellow Aditi Deshpande (class of 2014-16). Dr. Deshpande works under the mentorship of in the Genetics of Autism Research Program in the Weill Institute for Neurosciences at the University of California-San Francisco. The program is directed by Lauren Weiss.

In 2016, I described the goals of my Meixner Postdoctoral Fellowship in Translational Research in the Autism Speaks science blog post “From skin cells to brain cells for autism research.”) Recently the scientific journal Cell Reports published the first major discoveries to come out of my fellowship project. I’m eager to tell you what I found.

A breakthrough technology for brain research

I used a revolutionary technology that enables us to take skin cells from study participants and transform them into induced pluripotent stem cells, or iPSCs. We can then stimulate the iPSCs to mature turn into different types of human cells that would otherwise be difficult to study. We turned ours into neurons, or brain nerve cells, each with the genetic makeup of the person who provided the skin sample. (See figure 1 below.)

Each of our study participants had one of two related genetic changes that predispose to autism. One change involves the deletion of a region on chromosome 16 called 16p11.2. The second involves the duplication of this same region. This segment contains around 29 genes, many of them with important functions in the brain.

While either change (deletion or duplication) predisposes a person to autism, there are distinctive differences.

A person with a deletion of 16p11.2 is likely to have an unusually large head and be obese, with a high risk of epilepsy.

Someone with a duplication of 16p11.2 is likely to have an unusually small head and be underweight, with a high risk of schizophrenia.

From neuron size to brain size

Could studying brain cells from affected individuals explain these differences? Could it help identify targets for future personalized treatments? These are some of the questions we sought to answer.

Our lab, along with our talented collaborators, found that the iPSC-derived neurons from 16p11.2 deletion carriers were larger and more complex than we see in typically developing neurons. They had larger cell bodies (soma size) as well as longer branches (dendritic length). By contrast, stem-cell-derived neurons from 16p11.2 duplication carriers were smaller and had shorter branches. (See figure 2 below.) 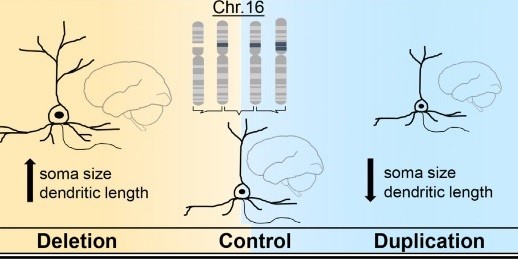 These differences may well underlie the contrast in head sizes we see. In other words, a general increase in neuron size could lead to an overall larger head, and smaller neurons could lead to reduced head size.

Importantly, we also identified differences in how the altered neurons function. A neuron’s main function is to communicate with other neurons. It does so by sending and receiving chemical signals across a microscopic gap, or synapse, between the branching extensions, or dendrites, of each cell. (See figure 3, at right.) 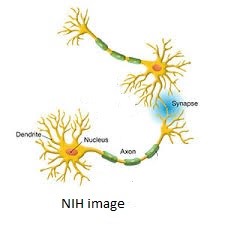 We found that the derived neurons from both 16p11.2 deletion carriers and duplication carriers had fewer synapses (brain connections) compared with the neurons of typically developing people.

This suggests that the altered neurons are not communicating well. This mutual problem may give rise to the shared risk for autism and related developmental delays that we see in people who have either 16p11.2 deletion or duplication.

It’s encouraging to note that other researchers have likewise seen this type of reduction in synapse density in mouse models of autism, as well as the iPSC-derived neurons they’ve created from study participants with other types of autism. This suggests that the future may bring common treatment strategies for severe forms of autism – despite there being many different genetic causes and predispositions to the condition.

We have much to learn on the path to effective treatments. What are the functions of the 29 genes in the 16p11.2 segment? Which are responsible for the physical and neurological differences and health issues we see in people with 16p11.2 duplication or deletion? We look forward to the challenge of addressing these issues – always with the goal of improving the lives of people on the autism spectrum.

In closing, I want to thank the Autism Speaks community and the estate of Charles Meixner for supporting this work. I look forward to reporting on our progress in the months and years ahead.