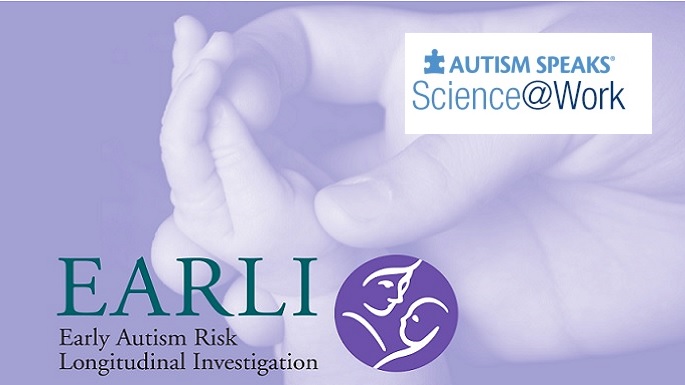 In 2007, the National Institutes of Health (NIH) funded the Early Autism Risk Longitudinal Investigation (EARLI) to advance understanding of environmental risk factors for autism. In this context, the term “environmental” refers to a broad range of non-genetic influences including parental age and prenatal health, as well as exposure to chemicals and other pollutants.

Autism Speaks provided additional research grants to broaden and fill gaps in the ambitious study. The goal: to deepen our understanding of how autism develops in ways that might lead to prevention of impairments, earlier intervention and personalized treatments and supports.

Because autism tends to run in families, EARLI researchers enrolled families of children with autism when the moms became pregnant again. They tracked the women’s health and their exposure to conditions and chemicals that might affect early brain development and perhaps increase the risk of neurodevelopmental disorders such as autism.

The participating families provided biologic samples such as blood, urine and the new baby’s placenta for study. In addition, the babies received developmental assessments starting as early as six months and continuing to 36 months of age, when each child completed a diagnostic assessment for autism. The investigators also did genome-wide association studies looking for genetic and epigenetic patterns associated with autism symptoms.

EARLI researchers recently finished the data collection on the 235 families in the study, which was conducted in northern California, Philadelphia and Baltimore. They have just begun analyzing the unprecedented trove of information.

We sat down with lead investigator Craig Newschaffer to discuss the study’s importance, the role that Autism Speaks played in its success and the early insights that are beginning to emerge. Dr. Newschaffer directs Drexel University’s AJ Drexel Autism Institute, in Philadelphia.

Autism Speaks: Why is the EARLI study so important?

Dr. Newschaffer: EARLI is so important because it’s one of the first major prospective, or forward looking, analyses of environmental risk factors for autism. We’re collecting information in real time, rather than relying on clues in medical records or someone’s memory of what she was or wasn’t exposed to during a past pregnancy.

By collecting and analyzing biological samples – such as blood and urine – we can measure environmental exposures and the body’s response to them during pregnancy and early life. By exposures, we mean everything from a mother’s diet and health to potentially toxic chemicals in the home or workplace. Responses to these exposures can include inflammation in the mother’s body, which a growing body of research suggests can affect prenatal brain development.

We believe this information will deepen our understanding of autism’s complex causes. In particular, we want to see how genetic makeup might make some children more vulnerable to the effects of environmental exposures. Ultimately, we hope this understanding will lead to more-effective strategies to prevent and perhaps even treat the impairments associated with autism.

What makes EARLI particularly powerful is that it involves families that already have a child with autism. Autism tends to run in families. So rates are much higher in these families than in the public. This enables us to get a lot of information about autism’s causes from a relatively small number of families.

Autism Speaks: What are the study’s goals? What does it seek to deliver to the autism community?

Dr. Newschaffer: We would love to provide direct guidance to parents on actions they can take to safeguard healthy brain development and reduce the risk of impairments associated with autism. In the near term, however, that’s a very ambitious goal. The causes of autism are extremely complicated. In most cases, we believe that many factors contribute to its development, not just one thing or another.

Research has already documented this kind of complexity on the genetics side. For example, science has identified hundreds of gene changes as influencing the development of autism to some degree. In most cases, it appears, many gene changes have to come together before a child develops autism.

We think we’ll find the same is true with environmental factors. Individually, each may increase risk only a modest amount. Chances are slim that we’ll be able to say that any single environmental factor will reduce or increase the risk that a baby will develop autism in a manifold way.

It’s also important to stress that studying environmental risk factors can help us understand autism’s biology. Taking another example from genetics, studies have found that many different autism-linked genes affect the same brain pathways. This may be true of environmental exposures, as well. Many may influence the same pathways during brain development. Once we identify these pathways, we may be able to develop treatments that protect and support their healthy development and function.

As we enter into this promising phase of research, it’s also important to carefully consider how we can best translate scientific evidence into action. In July, I was among more than 30 scientists, physicians and public health experts who published a call for a new framework for assessing evidence on chemical exposures of concern for brain development and then translating this evidence into action to protect the public.

Dr. Newschaffer: The contribution made by Autism Speaks was huge and came at key times. Soon after the NIH funded EARLI, Autism Speaks supported our collaboration with another large autism study funded by the NIH – the Infant Brain Imaging Study, or IBIS.

Like EARLI, IBIS focuses on the infant siblings of children already diagnosed with autism. It uses brain imaging to examine their early brain development alongside behavioral assessments up through 36 months of age.

Research grants from Autism Speaks enabled our two research groups to share resources and information. It also allowed us to coordinate how we assessed behavioral development. That coordination is now allowing us to combine our findings to produce more-meaningful results.

I’m particularly excited about how this collaboration will allow us to take the first look at how genetic mechanisms and epigenetic differences influence a child’s developmental trajectory. Epigenetics refers to mechanisms that control when and where in the body different genes turn on and off. As you might imagine, precise control is vital to healthy brain development.

We know that development trajectories in autism differ widely. Some kids plateau. Some continue to make gains. Some regress. There’s also the broad continuum of where kids end up in terms of the severity of their autism-related impairments. We know, for example, that many siblings of children affected by autism have some autism-related impairments, though they may not qualify for an autism diagnosis. We want to understand what causes all these different trajectories, especially during early life when the right interventions can make such a big difference.

In addition, our most-recent Autism Speaks grant gave us the crucial funds needed to finish the data collection on the 235 families that participated in our study. Without it, only half of the enrolled families would have been able to complete the critically important 36-month behavioral assessments.

Several smaller Autism Speaks grants allowed us to use the information we gathered to look at specific concerns around prenatal exposures. One of these studies looked at exposure to a class of flame-retardants called PBDEs, for polybrominated diphenyl esters. Another looked at levels of male hormones, also called androgens, in umbilical cord blood and the mother’s urine for chemicals such as the antibacterial products triclosan and triclocarban. These chemicals are of concern because they may affect the biological response to sex hormones such as testosterone, which in turn influence brain development.

Now that we have completed our 36-month behavioral assessments, we can begin assessing whether there are associations between these exposures and autism.

Dr. Newschaffer: In looking at male hormone levels in cord blood, our Autism Speaks Weatherstone Fellow Bo Park found an association between male hormone levels at birth and the severity of autism impairments 12 and 36 months. But he found this association only in babies who had an older sister, not an older brother, with autism. This suggests that the genetics in families with autism-affected females may influence brain pathways that are dependent on sex hormone levels. However, since this is the first time that a study has found this relationship, we need to treat these early findings with caution and confirm them with additional studies.

Our EARLI colleagues at Johns Hopkins Bloomberg School of Public Health also looked at sperm samples donated by participating fathers. They found epigenetic patterns in the father’s sperm associated with the severity of autism-related symptoms in babies at 12 months. These patterns might reflect naturally occurring changes in the way men make sperm or could reflect the influence of environmental exposures over a man’s lifetime. Again, we need more research. As mentioned earlier, epigenetics remains a very active area of interest for EARLI scientists.

Naturally, we’re all impatient for advances that can help the autism community now. That’s important. At the same time, we also need prospective studies like EARLI to establish a foundation for further study. These projects are long-term investments that I believe will pay off. In fact, I expect EARLI to produce the bulk of its findings over the next 5 to 10 years.

Autism Speaks: We look forward to sharing these upcoming findings with our community.

Dr. Newschaffer: As do we. Let me close by thanking Autism Speaks’ donors and volunteers for supporting this research and by extending my special gratitude to the families who participated in EARLI.