What my son with autism wants you to know about him

This blog post was written by Kathy Hooven and her son, Ryan, who has autism. You can read more about Kathy and her family on her blog, "The AWEnesty of Autism." 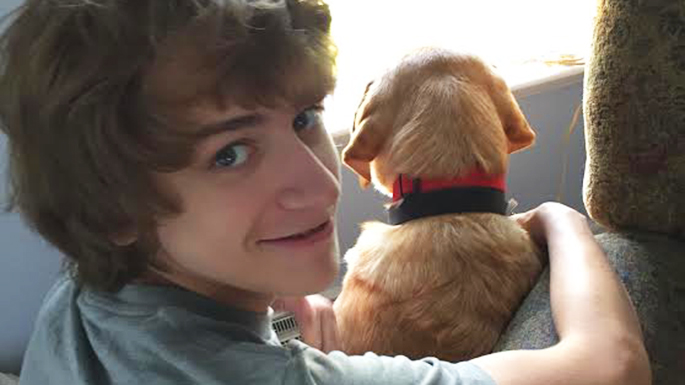 I'm a Mommy Blogger in the autism community and sometimes we are in the crosshairs for writing about our children with autism and autism in general, especially from those living with autism. I get it. I don't have autism. I don't know what it feels like to have autism. I don't know what it's like to be my son. However, before I put on my kevlar, jump up on my soapbox and defend my blog, apologize and delete my blog, or chastise other Mommy Bloggers, I decided to try and take the heat off (if only momentarily) by going right to the source. My source, that is, and ask my son Ryan what he wants you readers to know about him, in his words, not mine.

I approached Ryan while he was in mid-creeper kill playing Minecraft (once again putting myself in the crosshairs for interrupting something so meaningful). I told him what I wanted to do and said, "If someone were to ask you who you are, what you're all about, what would you tell them?"

Well, much to my surprise and delightment, Ryan left the creeper killing to some other online gamer, sat on the floor next to me, and I began my "interview" with a most reliable source. Ryan easily told me "who" he was and at times he even grabbed my phone out of my hands and started tapping away, frustrated with my inept and slow typing speed. I was amazed that for someone who "has an extreme fear of sharing personal information", how much he wanted you to know.

So here you have it, straight from the horse's mouth ("I'm not a horse Mom. Sometimes you're kind of dumb".). Yep, sometimes I am.

1. His name is Ryan.
2. He is 14 years old ("I typed that since I will be 14 in two days").
3. He is in 8th grade.
4. He loves Minecraft. (A lot, a whole, whole lot).
5. He loves his dog Rookie.
6. He love his family...most of the time (He struggled with whether to use the word "some" or "most". Sigh).
7. He loves Velveeta Shells and Cheese (Original only. Never, ever, ever, the gross 2% milk kind that doesn't taste "fresh").
8. He loves listening to The Pulse on XM Radio.
9. He has perfect pitch and he loves to sing in chorus (and thanks to XM Radio, in the car now too).
10. He love the singer Ed Sheeran (and he can mimic his singing fairly well. Call us Ed Sheeran, Ryan is waiting).
11. He is an excellent student who loves school ("not making the Honor Roll would be a fate worst than death". Ummm...I don't think so, but, this is his list).
12. He loves Hollister tshirts because they are so soft (and the ones that are three years old are the softest of all regardless of how they fit).
13. He hates the feel of paper ("I can feel the paper right in my spinal cord").
14. He loves Rita's root beer gelatis (and hates that they are closed from October-March).
15. He loves Auntie Anne's Cinnamon Sugar Pretzel Nuggets (and loves that they remain open all year round).
16. His favorite season is a "competition between summer and fall" (it's hard to choose between watermelon and apple cider).
17. He wants to learn to play guitar (see Ed Sheeran comments above).
18. He wants to learn more about computer coding (I fear he will one day move across country to work in Silicon Valley and forget how perfectly I make those Original Velveeta Shells and Cheese. Does Rita's stay open all year long in California?).
19. He likes his hair long, not short (and he rocks it too).
20. He is a vegetarian. Meat is "gross" (unless you count hot dogs and fish sticks as meat. He does not).
21. Sometimes severe storms make him a little "paranoid" (not nearly as paranoid as they use to though).
22. He prefers writing over talking (and is really quite good at writing).
23. He loves watching Minecraft "play-throughs" on YouTube (yeah, I don't get it either).
24. His favorite vacation spot is Disney World (even though sometimes he "hates walking through all those parks").
25. He knows when he reaches his limit, like when I asked him what he wanted number 25 to be and he said, "I think that's enough. I'm done."

That's a lot of information. I consider my source very reliable and AWEnest and I was amazed at how long Ryan sat still for the "interview". I think he really wanted you to know exactly who he is and exactly how he sees himself. As you can see in Ryan's list of 25, well, ok, technically 24, things he wants you to know about him, The A Word did not make the list. The A Word was never considered and never mentioned...until I brought it up. "Would you want someone to know that along with being an excellent student, a beautiful singer and a great gamer, that you also have autism?". With a sincere and confident look on his face, he said, "No, I probably wouldn't tell them that because that's not who I am. Wasn't I suppose to tell them about who I am?". Yes, yes, you were my AWEsome boy.

There has been a debate recently when discussing someone who has been diagnosed with an autism spectrum disorder as to whether they should be described as "a person with autism" or an "autistic person". According to Ryan, when it comes to describing him neither label is necessary because autism is not who he is. He is a son, a brother, a dog lover, a singer, a gamer, an Ed Sheeran fan, a future coder, and a vegetarian(sort of). Autism is not who or what he is, something all of us Mommy Bloggers, parents, autism advocates, doctors, therapists, teachers and pretty much everyone in the whole wide world should take note of.

As he got up and returned to his creeper killing, Ryan assured me, "this discussion is over" (see #25). It certainly is my boy, it certainly is.

Blog
Your hopes for the autism community for the next decade

Life on the Spectrum
A poem about creating an inclusive world

Blog
7 Steps to Take A Stand Against Bullying