After the most academically difficult semester of my undergraduate career, I was thankful that finals week was over. As the resident assistant of Defiance College’s ASD Affinity Program, I began preparing to go through the end-of-the-year checkout process with all five of my residents.

This included making sure rooms were clean and damage-free, ensuring that no personal items were left behind, and collecting room keys. After a long semester, I was excited to check everyone out and leave campus as soon as I could, but after checking out the first two residents to leave, I began feeling nostalgic, as I remembered all that my semester as a resident assistant had been. 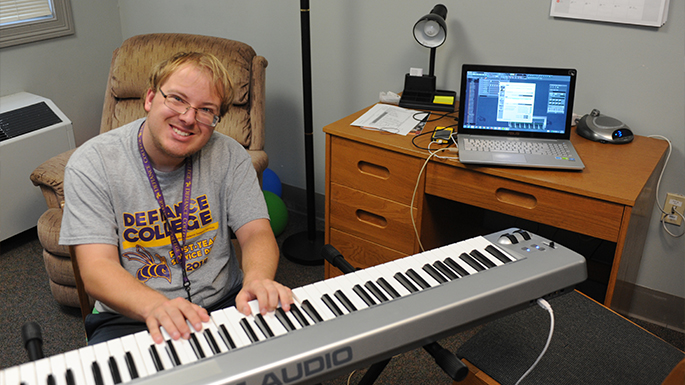 When I was offered the position, I had already spent a semester getting to know the students in the program. I learned that they each had their own interests, likes, dislikes, strengths, and weaknesses. When I became their RA, I was able to understand this on a much deeper level. I learned that each student is a unique individual who brings different skills, experiences and qualities to this college community.

1. One student enjoys music and spending time searching for the most entertaining videos on YouTube that are sure to provide others with their share of laughs for the day. This student is also gifted in the fact that he is one of the kindest people I have ever met.

2. Another student is clever and witty, and he is very observant, often pointing out things of importance or details that one can appreciate, which I typically would not notice without his assistance. He also earns an A+ when it comes to sense of humor.

3. A third student amazes me in the way that he is so self-sufficient. He truly inspires me, as he comes from a difficult situation. Yet, he still attended college, and even though circumstances were not always favorable, he finished out the year. Also, his ability to use math and numbers in such a way that my brain cannot comprehend is rather awe-inspiring.

4. One of the two young women in the program impressed me with her general sense of calmness in just about every situation. By the end of the year, I was convinced that nothing could upset her. She and I also share a deep appreciation for chocolate, which we often discussed and sometimes indulged in together.

5. Finally, the fifth student in the program constantly provided me with reminders to appreciate life’s small details. As a collector of many different items, she enjoys sharing facts that I would not have known otherwise.

Without a doubt, I was the proudest RA on campus. Not proud of myself, but proud of all of my residents.

College is not easy, but they each returned home having successfully completed their freshman year. My position in the Affinity program was one where I acted mostly as a facilitator, assisting only when necessary. Given the correct tools through the program, these students were successful on their own. It was truly amazing to see. I am thankful to have been given an opportunity to work with these young adults, and I am glad to say that this year, I have gained five friendships, which have taught me more than I can verbally express.

I’ve learned that while we live in a world where it is easy to define people based on diagnoses that they have people are so much more than those labels. My residents have taught me in different ways that there is value in the gifts and abilities that each person possesses, and I believe that these outshine every form of disability.

I very much appreciate that my school has a program like the ASD Affinity Program, which provides the structure and resources for students on the autism spectrum to achieve academic and personal success, and I think it would be great for other schools around the country to implement these types of programs in the future.

Want to learn more about postsecondary opportunities? Read our Postsecondary Educational Opportunities Guide here. Know of a student currently in college wanting to help support the cause? Tell them to get involved with our college initiative Autism Speaks U.

Blog
How to Support a Child with Autism in the Classroom