Nine Ways I Helped Foster Friendships for My Son with Autism

This is a post by Lisa Smith, the mother of seven children, two with special needs. Her son Tate has autism. Lisa blogs about her experiences and can be found on Facebook at Quirks and Chaos or at quirks-and-chaos.blogspot.com.

People are so amazed that my son with autism has friends and I get that. I marvel at it myself. The very description of autism is about as far from the word “friend” as a person can get. Words like: aloof, detached, and indifferent, are descriptive of autism, right? So how can a kid with autism have a friend or be a friend?

Below are the components that were used to create the friendships Tate has. 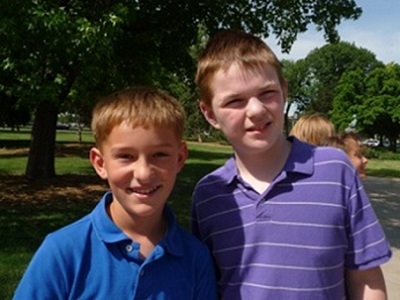 Tate was in the classroom with typically developing peers for most of his day in grade school. His peers became very familiar with his behaviors and his needs. In Junior High Tate spends a lot more of his day in an individualized education setting because he works at a much lower grade level than his peers. However, the relationships developed in grade school are still being nurtured often in various settings.

This one is HUGE. We never hid Tate’s diagnosis from his peers or their parents. When Tate did things that seemed odd the kids could ask questions and they were given age appropriate information. I asked Tate’s teachers to read books about children with autism with their class. When people are given correct information and educated they are not left to come up with their own version of the truth. Tate was never thought of as “weird” because his classmates and their parents were educated about autism.

Tate had full support at school. An adult was constantly giving Tate instruction in social skills. On occasion, members of Tate’s IEP team would suggest Tate did not need support on the playground but instead needed free time (which would have been used by Tate to pace alone and stim). I insisted the playground was a crucial time for him to receive coaching. This playground coaching played a large part in developing friendships. Tate was pushed to play with peers and peers were encouraged to include him in games and to give him support themselves. The Paraprofessional was able to stand back and watch as the other children engaged Tate in play sometimes.

We had organized social skills programs for Tate. The speech teacher came into Tate’s classroom twice a week in the early grades and organized board games and other activities for Tate and a few peers to engage in together. She coached the peers on how best to interact with Tate while she was coaching Tate on how to behave appropriately. We started a lunch buddy program in second grade and it was invaluable. Today, social skills are still a part of Tate’s daily education.

Many of the programs and supports Tate needed to develop friendships would not have been put in place had we not hired an advocate. She occasionally observed Tate at school, made recommendations, and always came to our IEP meetings. Our advocate was more knowledgeable about autism and the law than many of our IEP team members. She could often provide data to support her reasoning and she requested and received things for Tate that I had never thought to ask for. An advocate is very expensive but ours was worth every penny. Note: If you cannot afford an advocate my advice would be to get a Wright’s Law Book and study.

Without kind, willing peers Tate could not have friends. We had willing peers with compassionate parents who allowed their children to be pulled from other activities occasionally to be peer models for Tate.

Teachers Who Were Vested:

We have had some rock star teachers involved over the years. Not every teacher was willing to work hard or believed in what we were doing but most did. The speech teachers have usually been the ones to drive the lunch buddy program for us but others have helped too. Tate’s Paraprofessionals had to shoulder the majority of the responsibility much of the time as they are the ones who spend the most time with Tate. They reinforced all the social skills lessons into all aspects of Tate’s day. Without all these hard-working adults we would not have gotten far.

No one’s involvement is more important than the parent. We badgered administrators and teachers for programs we thought really mattered and we were not afraid to ask for things they had never done before. We paid for an advocate. We provided books about autism and social skills to teachers. I dropped donuts off at the school occasionally for the students participating in the lunch buddy program. I volunteered at the school and tried to keep an eye on Tate and his progress from the sidelines. I had to invest time in getting to know other parents. Other parents were not going to be willing to allow their children to have play dates with mine if they barely knew me. I had to “borrow” their kids after school occasionally and go to the park or get ice cream. And during those times I was the social skills coach. Early on Tate was not thrilled when I arranged play dates but I did it anyway.

It did not happen over night. Tate was in class with some of these kids for four years before he could tell them apart or remember their names. It took ages for Tate to develop reciprocal relationships with these kids and it took a lot of hard work. Tate had to be taught really basic social skills and those had to be reinforced for years. His peers had to be educated about autism and the adults in Tate’s life had to utilize every opportunity they could find to work on social skills. At the beginning a lot of Tate’s relationships were very one-sided. The peers were nice to him but he was not interested in them. We did not give up. I can honestly say that Tate has friends his own age now. He is able to actively participate in friendship. I did not know if we would ever get here but we have.