My son may be different, but we're all different

James Guttman is the father of two children, a nonverbal eight-year-old with autism and a non-stop-verbal eleven-year-old without autism. His blog can be found here. 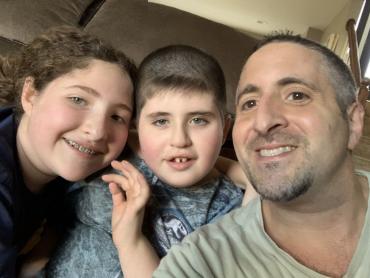 Autism was supposed to be a worst-case scenario. That was the way it was presented in all the months leading up to my son’s birth. We were tested, screened, warned, and scared over the prospect of anything outside the norm. What would be so bad about autism? We didn’t know. We didn’t ask and no one told us.

My daughter, nearly three at that point, was neurotypical. So, for our family, that was what we were aiming for in round two. Of course, there was nothing we could do to make that happen. We just had to hold on and hope for, what we believed to be, the best.

Of course, this was before my son was born and even further before he was the nonverbal eight-year-old boy he is today.

Regardless of their assurances, I did. I worried like there was no tomorrow. As we all know, though, there was a tomorrow. There’s always a tomorrow. As tomorrows became todays and our lives started to change, our family found ourselves with a little boy who had the very thing we were told to worry about.

I didn’t know how to handle it at first. I wasn’t sure if I should hide his clapping from the outside world or try to stop him from occasionally shouting out with glee. I’d notice the sympathetic stares from friends and family as they tried to decipher his behaviors. Truth be told, I was trying too.

As more tomorrows came, though, something started to happen. Soon, all of these things that once seemed so scary and abnormal to our family became, well, normal. Lucas’s actions became part of our lives and, while they were still something for the outside world to decipher, they were now just a natural part of ours.

Just like my daughter breaks into random TikTok dances throughout the day or I watch Japanese wrestling matches with commentary in a language I don’t speak, my son has his own unique ways.

One of the heartwarming sentiments people would offer throughout the early years of his development was to say, “He’s lucky to have you.” It always put a smile on my face and made me proud to know I was helping him navigate the world. Outsiders could see it and, I knew he could see it too. We were all trying to make his life better.

What many people don’t realize, though, is that we’re also lucky to have him. Lucas is unlike anyone I ever met in my life. His intentions are always pure and his love is always real. He’s not duplicitous or rude. He’s never mean or selfish. He’s the only person I’ve ever known who doesn’t have the slightest hint of an ego.

That’s not to say that every person with autism is like that, but my person is. The thing that I feared the most before he was born has helped make him into one of the most unique and beautiful people in my world. I thank the universe every day for bringing him into our lives and, if autism is a big part of who he is, then I thank autism too. Without it, he might be a different person and that would truly be the worst-case scenario.