A moment of unexpected kindness towards my son

Spreading acceptance and understanding to a stranger on a plane 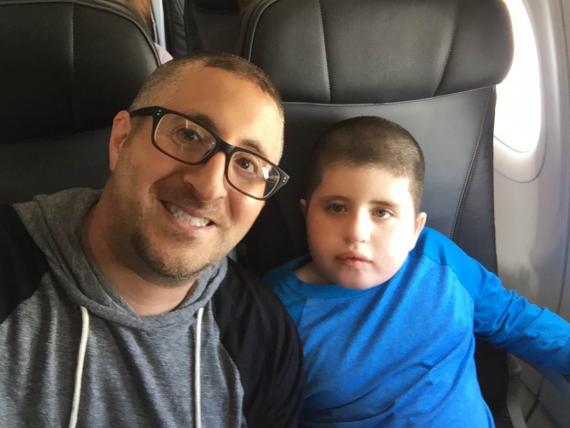 James Guttman is the father of two children, a nonverbal eight-year-old with autism and a non-stop-verbal eleven-year-old. His blog can be found here.

I’ve spent a lot of time worrying about how my nonverbal son will “handle” things.

Birthday parties, holiday dinners, and other events all provide me with pre-departure jitters. In almost every case, he’s on great behavior and I wind up chastising myself for ever doubting him. Still, the next time an event springs up, I can’t help but worry all over again.

Lucas’s meltdowns may be few and far between, but they happen and they can be pretty loud when they do. Truth be told, the same can be said for his happy times too. There’s nothing more shocking to a rarely-seen second cousin than to hear my boy’s blood-curdling scream of delight over his favorite Sesame Street iPad clip.

Above all else, airplanes have always worried me the most. Our vacations to Disney World are always bookended by nervousness regarding the journey back and forth on a floating metal tube of people. We may be going to the happiest place on Earth, but the trip itself is one of the scariest.

So, I was on my usual high alert a few years ago. Between the excitement and maybe juice boxes, my son was all revved before we even boarded. We were in a three-seat row with Lucas against the window. I was in the middle between him and a man who appeared to be a cross between an army sergeant and a retired gym teacher. As the plane took flight, so did my boy’s excitement level and my own anxiety.

He was overjoyed with a Jack-in-the-Box app on his iPad and began a routine that we had become accustomed to at home. He would swipe the digital box open, watch the animal spring out, clap his hands so hard that they echo, and repeat. Despite my attempts to soothe him by rubbing his shoulders and repeating, “Shhh. No buddy, we have to be quiet,” he persisted.

He wasn’t being “bad”, but I knew that it would be disturbing to others. My paranoia took over and, in my mind, the entire cabin was going to bum-rush us with pitchforks before we ever touched down in Florida. We were doomed.

Even Sgt. Gym Teacher to my immediate right had noticed. I could see him from the corner of my eye, staring and leaning in closer to me. I envisioned all the things he was about to say. I thought, “Oh great. Now I’m going to have to fight this guy…on a plane.”

I could see it all now – the vertical cell phone videos with people screaming “World Star,” no-fly lists, and TSA agents waiting at the gate. I was about to brawl myself right out of this vacation before it even started. Then, he spoke.

“You know, you don’t have to keep him quiet for me. You can let him have fun. He’s not bothering anyone.”

It was the last thing I expected.  And I didn’t know what to say other than “thank you”. From there, we spent the rest of the trip talking about Lucas, autism, and how it had affected our family.

This man had a million questions, many of which had become common knowledge in our lives. It reminded me that so much of what we assume people realize about our situation, they don’t. He knew so little about autism and genuinely wanted to understand whatever he could. The closest comparison he could find to his life was that his son “played that flippin’ Xbox so much”.

When Lucas gestured to his bag of cookies, the man happily gave them to him. When the flight attendant brought a second one, he gave those to him too. This man bore no resemblance to the kind-hearted strangers you read about in a story. But he ended up being the kindest-hearted one I have ever encountered.

That day, I truly understood the importance of autism awareness. Loving someone like my son can produce paranoia at times, but we can’t live in a bubble. There are people who want to enter our world and meet our wonderful boy.

You can build walls, but make sure they have doors you can open. Otherwise, no one will ever be able to get in.

Spread a little more kindness by taking our #KindnessCounts Challenge.