Back to work in the pandemic 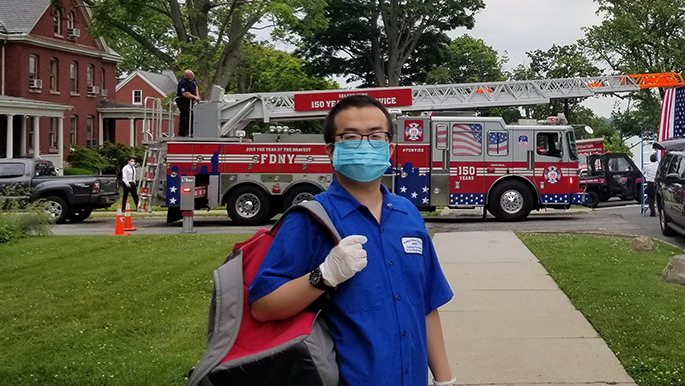 Vincent is enrolled in the FDNY Emergency Medical Service Training Academy and couldn't wait to get back to work, even during the pandemic. Before heading back into the field, Vincent had to overcome some of his sensory issues, like wearing a mask and gloves for long periods of time and modifying his once rigid schedule to adjust to new procedures in the workplace.

On June 1, 2020, after two and half months locked down at home, we agreed Vincent could go back to work. At that time, NYC was still not fully reopened but we were confident that the site where Vincent was working as a janitor was safe, as his company had hired extra workers to sanitize buildings and take extra precautions.

The final decision to go back to work came down to Vincent’s strong desire to be out in the field. Since being quarantined in late March, he kept asking us when he could go back to work. He was fully aware of the danger of the pandemic, but was willing to make any adjustments.  One of the challenges was he needs to wear a mask and gloves when he is at work. This makes him very uncomfortable due to his sensory issues, but he took it seriously and practiced wearing a mask and gloves at home for one week.

Each day he increased his practice time from a half hour up to five hours, just like he would do during his shift. He also needed to change his routines, like avoiding taking buses, skipping dinner at work, drinking bottled water instead of tap water and so on. Thankfully, Vincent was able to overcome difficulties that some people on the spectrum often encounter - sensory sensitivity and rigid routines – without much struggle. His motivation to be back doing what he loves empowered him to conquer any obstacles ahead of him!

On his first day back to work, I took him to the office, which also happens to be the FDNY campus. We stumbled upon a ceremony for a recently retired employee, who had been there for over thirty years! I asked Vincent if he wanted to take a picture in front of the firetruck parked in front of the ceremony and of course he was glad to do so. I think we both hoped that one day we could be back in the same place together celebrating his retirement after 30 years of service at a career he loves. That would be a dream come true for both of us!

Since he began working in this field, I can see Vincent’s confidence grow leaps and bounds. I believe he has realized that one day he could support himself, have a meaningful career and live on his own. He started by working 15 hours per week, but one month later, his manager gave him more hours because they saw his desire to learn. Now, he goes to work every day with a smile on his face. I am so proud of my son and how far he’s come.

For Vincent and our family, this pandemic does impact our lives in many ways, but it could not stop us pursuing our dreams. Vincent may not be able to verbally give career advice for his fellow young men and women on the spectrum, but his actions and persistence speak out for him. If you are able to protect yourself, we all can overcome this pandemic together. However different the world may look right now, Vincent would say not to let the pandemic stop you from following your dreams!