As a self-advocate, I speak for those autistic people who can’t speak for themselves, in hopes that the bullying that happened to me will not happen to anyone else.

At 24 years of age, there’s no doubt that Gianna is comfortable in her own skin. A confident college graduate with a passion for singing, theater and advocating for autism awareness and anti-bullying, this Massachusetts resident knows exactly who she is and isn’t afraid to show it. But unfortunately, this wasn’t always the case. 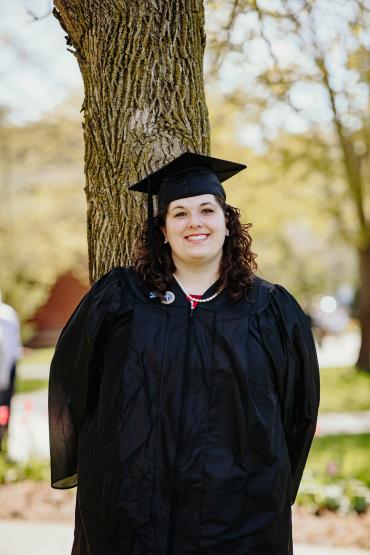 As a pre-teen Gianna couldn’t comprehend why she felt so out of place and different from most other kids her age. Her classmates didn’t get why she needed more time to complete assignments, or why she would rock back and forth at her desk. They couldn’t understand why a girl who looked “normal” didn’t quite fit into the social norms society has carved out for kids of that age, so they made fun of, bullied or simply avoided her. Gianna says finding friends was nearly impossible and it led to her strong beliefs in standing up for what is right.

That’s why today, when she’s not using her powerful voice to sing show tunes on Broadway or the national anthem at high-profile sporting events in Boston, Gianna is advocating for people with autism and fighting against bullying of people of all ages, creeds and backgrounds.

When were you diagnosed with autism spectrum disorder?

At two years old, when I stopped talking and showed other signs of autism, is when I was diagnosed. At the time, doctors didn’t think I would regain language, and unfortunately, in the 1990s, Pennsylvania did not have many services and therapies available for me.

When did you begin to understand what it meant to be diagnosed with autism?

I don’t really remember what was happening at the time, I was sort of in my own little world. I found out that I had autism in the 3rd grade, during a time when I was severely bullied at school. Prior to that, I had no idea why people viewed me differently. Teachers assumed I couldn’t learn and put limitations on me. I had no friends. Whenever I attempted to be friendly with someone, they either made fun of me, ignored me or told me to “get lost”. I even invited over 40 people to my birthday party one year, and not one showed up. Except for my parents, I was very alone.

After I was told what autism was, I understood why I acted differently from other kids. By 5th grade, however, the bullying got worse. It was horrible because I knew that I was nice and funny and had similar interests as the other students, but no one wanted to be my friend.  It was then that my parents and I decided that I needed to spread autism awareness, and I made a presentation to my school. However, teachers and students had already formed an opinion about me, and nothing was going to change. Finally, my parents moved us to Massachusetts where there were better services. We found a school district that better understood how I learned, and the bullying decreased.

What struggles have you faced because of your autism? In what areas has autism helped you excel?

As a person with autism, I faced a lot of problems, and I still do. In general, I have a hard time focusing on some things, or I end up over-focusing. I also stim by rocking back and forth, can sometimes pace and talk to myself.  I used to flap my hands all the time, but I have learned to control it. Certain sounds like fire alarms and screaming babies are extremely painful in my ears. I tend to get really stressed out when I can’t process certain information in my head right away (when I was younger, I used to run away). I also have a hard time maintaining eye contact, socializing with others, starting a conversation and being mindful of how I react to certain things, i.e. my tone and my volume.

In school, I would have a really hard time in class, because the teacher would go so fast during a presentation and would get mad at me for asking them to slow down. I also got flustered whenever I had a limited amount of time to complete an in-class assignment or a test.

As to where my autism has helped me to excel, I think getting really good grades in school, and ESPECIALLY my music. I memorize everything and have a great work ethic. I have no fears of public speaking or singing in front of an audience. With regard to music, I discovered a talent I never knew I had; I understand the language of music and it makes me feel so good to know there is something my autism doesn’t limit me from doing.

Tell us about some of your passions.

In addition to singing, I also really enjoy drawing, cooking and traveling with my parents.

I’ve had a lot of moments where I felt proud of myself for what I’ve accomplished, but the one I think I was most proud of was when I sang at the first Arts for Autism concert on Broadway. It was me, singing a solo on the Broadway stage in New York. You can’t get better than that! Graduating from Gordon College is also one of my proudest moments. I didn’t think I’d ever even make it to college, but I graduated in December, with a music major and a double minor in theater and French, and I even made Dean’s List.
Another great accomplishment was singing the National Anthem and God Bless America for the Boston Red Sox, Boston University Men’s Hockey, the Lowell Spinners (a minor league baseball team) and the Allstate Life Insurance Boston 13.1 Marathon. I was also one of the finalists to audition to sing the American and Canadian National Anthem for the Boston Bruins. I didn’t get the job, but I beat out more than 600 people to get to the finals. Finally, I am proud that I have become a public speaker that can spread my message about autism awareness at schools, fundraisers and other social events.

What is a major goal you are currently striving towards?

Well, I’ve already graduated from college, so that’s one major goal. Right now, I really want to become a professional singer, ultimately on the Broadway stage. If not on Broadway, then to perform elsewhere professionally. I would also like to continue my public speaking on autism awareness, acceptance, anti-bullying and inclusion. Whatever I do, if it involves music and a stage, that’s where I want to be.

Why is being a self-advocate so important to you?

It’s important for me to be able to tell people my story so that they understand people like me. As a self-advocate, I speak for those autistic people who can’t speak for themselves, in hopes that the bullying that happened to me will not happen to anyone else. Bullying and discrimination aren’t just found in schools; even adults can bully people with autism as I found out recently at my job. I want others to understand that autistic people are amazing and can accomplish great things if they are given a chance, treated with respect and included.

What is something you want the world to know about autism and people on the spectrum?

I want to tell the world that autistic people aren’t weird or crazy, our brains are just wired differently, so we process information in a different way. Some things that come very naturally to other people, we may need to learn, so the next time you see someone who has autism or is just different from you, be the example of what it means to be inclusive to others. Accept them as they are and appreciate their strengths. Stick up for them when someone treats them badly, or at the very least, just smile and say hi so that they know you care. Don’t ignore them; include them instead.

And parents, teach your children to be more inclusive. Tell them to invite kids with autism to be part of things with them, be friends with them, sit with them at lunch or on the bus and talk about what you both have in common, or even ask how their weekend was. Even if it’s not much, it’s better to be inclusive, because inclusion is a beautiful thing.

What is your involvement with Autism Speaks?

I’ve participated in the Autism Speaks Walk for about 10 years, including the one year we did it in Philadelphia. I’m currently a part of the Walk Committee for the Boston Chapter, and I speak and sing at fundraisers and schools to bring awareness about autism.

If you could describe Gianna Hitsos to people in just one sentence, what would that sentence read?

It would read: “Gianna Hitsos: changing perceptions of autism one song at a time.”