I saw how just one person took action. And I thought, I want to give back to an organization that can help other people. So it was a natural for me to choose Autism Speaks. 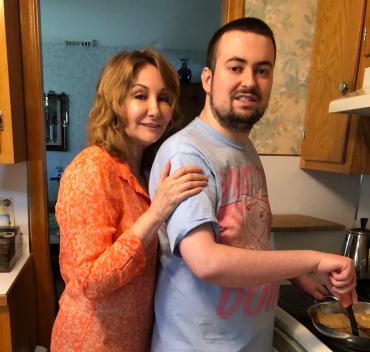 Dea L. is the Chief Marketing Officer at the iconic media company, Variety, an actress, a documentary filmmaker, and calls Los Angeles, CA home. And yet for all new and interesting people she’s had the opportunity to meet, her nephew Zachary is her favorite. He’s a great cook, a serious bowler, an enthusiast for the board game Battleship, a movie production trivia aficionado ― and he has autism.

“My nephew Zachary was diagnosed with autism at two years old. At first, we thought perhaps he was deaf because he wasn't responding and at the time, we did not really know the signs of autism,” Dea recalls. She continues, “My own personal experience with Zachary; he is the most lovable person on the planet. He's the most fascinating person I've ever met. More interesting than any movie star!”

After being diagnosed with autism as a child, Zachary’s parents were quick to get him the help he needed through local programs. But when Zachary’s father, Dea’s brother, passed away unexpectedly, she knew she had to do everything in her power to ensure that her nephew could find the right resources and opportunities to reach his full potential.

So when her nephew grew into adulthood and became ineligible for many of the programs that he and his family had come to rely on, Dea suggested that they turn to Autism Speaks’ Autism Response Team (ART) and the organization’s expanding adult services and supports for guidance.

Dea wasn’t a stranger to Autism Speaks. She had been involved with Autism Speaks through her work and had the opportunity to attend Autism Speaks events. She recalls being inspired by the story of its’ foundation. “I saw how just one person took action. And I thought, I want to give back to an organization that can help other people. So it was a natural for me to choose Autism Speaks.”

Now, Dea understands just how important it is for children and adults on the spectrum as well as their loved ones to find the resources they need to succeed ― and she is committed to doing so through Autism Speaks. That’s why she’s giving to Autism Speaks through a tribute gift in honor of her brother’s memory, and will leave a generous future gift through her estate plans.

Her wish? That more people would be understanding and accepting of children and adults on the spectrum. “You know, they just see that they have autism, but they don't understand the total person and their amazing qualities or how it affects the family, how an autistic child affects everyone else,” Dea says. “We have to accept people with autism and we have to bring them in. The more understanding that people have, the more people will be able to help.”

While Dea is already making a meaningful impact on the autism community through her planned giving, she’s also doing her part to promote inclusion in the entertainment industry. She currently serves as an advisory board for the Exceptional Minds Professional Training Academy and Studio, a Los Angeles organization that helps people on the spectrum develop animation and visual effects skills to find employment in the entertainment industry. She also hopes to promote more inclusion in her work at Variety and to help more people with autism find meaningful employment ― and acceptance.

She encourages others to do their part as well. “People can get involved, they can give $5, they can volunteer, they can just read about autism, too.” She says. “I think just understanding what autism is, is important… Everybody should pitch in and help one another.”

As for her nephew, she remains hopeful that a brighter future is possible for Zachary. “I want him to have a life, a fulfilled life, where he’s happy,” she says. “I just think he could be contributing so much to the world. People with autism have to be given a chance.”

Podcast
Adulting on the Spectrum: Exercise, sensory Issues and starting a business