He still struggles with expressing himself with words, but Azeem’s big personality will never cease to shine. 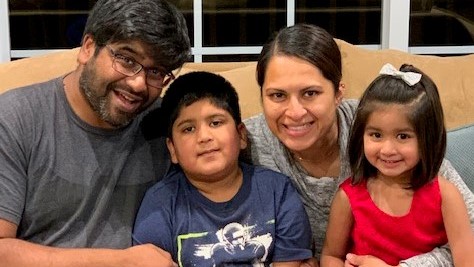 When Azeem was born, his parents, Fauzia and Asim, were ecstatic. The first-time parents were overjoyed to have a little boy and begin their journey as a growing family. For the first 10 months of his life, Azeem was hitting many of the same developmental milestones as the children in his playgroups – sitting, crawling, walking – but other things didn’t come as naturally.

Although their son’s lack of “baby talk” concerned them, the couple didn’t think Azeem was that different. That’s why when he was diagnosed with autism at 18 months old, the couple struggled to accept the news. But soon, it was that news that motivated them to take a deep dive into the vast spectrum of autism – empowering the parents to provide their son with the resources he’d need to live his most meaningful days.

Today, Azeem is seven years old and benefiting from a variety of therapies, educational and behavioral supports, and an outpouring of encouragement from family, friends and the autism community. He still struggles with expressing himself with words, but Azeem’s big personality will never cease to shine thanks to the love and understanding of his parents and younger sister, Aneesa.

Learn more about Azeem through the words of his mom, Fauzia, in this edition of Spectrum Spotlights. 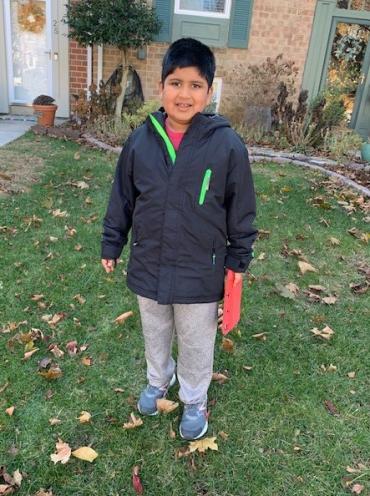 How old was Azeem when he was diagnosed with autism spectrum disorder?

Azeem was 18 months old when he was first diagnosed with autism spectrum disorder. A child psychologist came to our house and within 10 minutes of observing Azeem told me he has ASD.  At that moment, I was crushed, devastated and had no idea what I was supposed to do. I called a close friend and was scared to even tell my own family. What is autism? Why my son? Why us? Many thoughts went through my mind and deep down I knew that Azeem had a long journey ahead of him.

It was at that moment when I took matters into my own hands and researched autism. In the next year, Azeem was seen by a developmental pediatrician, an ear, nose and throat specialist, a speech language pathologist, an occupational therapist, etc... all of them gave me hope.  Every child on the spectrum is different but with early intervention, children can live meaningful lives and eventually become independent adults. That is my hope!

Did you realize something different about Azeem before his diagnosis? If so, please share some of your experiences and how the diagnosis came about.

One day, when Azeem was about 10 months, I was visiting my parents and they noticed he wasn't saying anything.  My sister asked Azeem to say “ball” and he repeated the word, but that was it. He only said it once and I never heard it again until he was older. At that moment it was brought to my attention that he should be saying and doing more. This was so scary because Azeem was my firstborn and I didn’t think much of milestones - I was just overjoyed having a child.

Honestly, I was in denial when he wasn’t saying, “mama” and “dada.” I remember him being in his own world and not having the best eye contact. He wouldn’t play with toys properly, he’d run around during story time and would always be fixated on certain things. Between the ages of nine and 12 months, I was hoping he would utter a single word, but unfortunately that didn't happen.

In your experience, how important was early intervention for Azeem?

It’s extremely important. As scared as I was to call The Baltimore Infant and Toddler Program (BITP), and admit to myself that Azeem was autistic, I was thankful I did. When I finally gathered up the strength to call, they immediately came to my house and placed him in a group for early intervention. He has been receiving services at home and in school since.

Azeem may not verbally communicate, but he communicates with us on his device and it’s awesome. I am confident that he’ll one day talk and become independent. He’s progressed in just the last year and watching him accomplishing tasks makes my heart full. I continue to meet parents that have young children newly diagnosed with autism and I happily hand out Autism Speaks toolkits, resources and helpful information. I was once there with nowhere to turn, feeling hopeless. Helping others makes me feel good and I'm glad I can steer them in the right direction.

Tell us about some of the things Azeem struggles with as a result of his ASD.

Azeem struggles with verbalizing and general interaction. With no verbal communication he gets extremely frustrated which leads to heavy meltdowns that consist of crying, screaming and some self-hitting. It's a struggle when he is frustrated because he can't tell us what's going on, which makes it hard for all of us. Azeem began applied behavior analysis (ABA) therapy last March and in nine months he has accomplished things I wouldn't have thought he was able to – we’re so proud.

On the contrary, please share some of the areas in which he excels.

Azeem has made a lot of strides using an app on his iPad called LAMP Words for Life. It was first introduced to him when he entered kindergarten. Now in second grade, he uses sentences and tries to verbalize by repeating sounds and certain words. He has a fantastic memory and never forgets anything. For example, he knows directions when we are going places in the car. He gets very excited about going to the park, his grandparents’ house and school.

He also always makes an impression on people who meet him for the very first time. Typical students in his school know him well and walk him down to his class daily. Of course, I cry each time I see that.  He is truly loved by many.

Take it day by day. Your child may be different and that is okay! I know what it feels like when people stare or make comments as you walk by, but you are your child’s biggest advocate and their voice. Days can be very unpredictable, frustrating and tiring, but you have to keep on going.  I know from personal experience that meltdowns are the hardest thing for both parent and child.  All you can do is love them, lay with them, wipe their tears, rub their backs and let them know that everything will be ok.

Also, I think it’s important that we educate family, friends, coworkers, colleagues and acquaintances. Get involved with Autism Speaks or any autism community in your area. I wish I had known about Autism Speaks when Azeem was first diagnosed because it would have helped me tremendously on this journey. They have infinite amounts of information, toolkits and resources that are helpful in guiding you in the right direction. I knew that Azeem was going to be okay, but had to get the courage to stand up and fight for him knowing that it would help him to become independent one day. 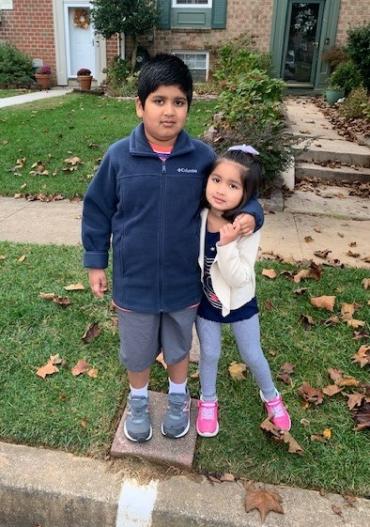 How has Azeem's sister, Aneesa, played a role in providing him with guidance and support through the years?

Aneesa is like his right-hand man. Even though she’s just three years old, she sticks up for him and makes sure people know that her brother is special and different. She also helps us with anything that we need to do for Azeem and is always willing to play or go places with him. She truly loves her brother. There’s no question that as she gets older she will advocate for him just like her dad and I do now.

What is your connection to Autism Speaks and how have they provided support to you and your family?

Autism Speaks has been a huge part of our lives. We signed up for the annual Walk in 2018 and formed “Team Azeem.”  I wanted to get out there and meet families who were going through the same thing. Doing that helped me see we weren’t alone. When I joined the Walk, I reached out to family and friends and announced it on social media. It wasn’t long before we had so many people sign up to support Team Azeem and Autism Speaks. We wound up being the highest individual donor in the Walk! Last month, Team Azeem finished in the top three fundraisers in the 2019 Baltimore Walk and we plan to participate again next year.

Because of Autism Speaks, we’re also able to take our son to many different autism-friendly events and activities in our community. The toolkits have also helped us, especially with toilet training and feeding. I have to say, Azeem is now fully potty trained, and is currently trying different foods thanks to the techniques in the toolkits.

Use five words that best describe Azeem to the world.