Together with NCAA coaches, broadcasters and fans, Autism Speaks promotes understanding and acceptance of people with autism through Coaches Powering Forward initiative

Weekend of February 1-2, 2020, coaches, players and teams to show their support for the autism community through national public awareness campaign 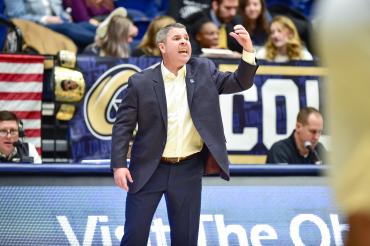 To share their commitment to creating a more inclusive world for people with autism – and to inspire fans to do the same – college basketball coaches from across the country will wear Autism Speaks blue puzzle-piece pins the weekend of February 1-2. The 2020 NCAA Basketball for Autism Speaks Coaches Powering Forward campaign is an annual effort to bring coaches, teams, schools, broadcasters and fans together in support the mission of Autism Speaks. Autism Speaks promotes solutions, across the spectrum and throughout the life span, for the needs of people with autism and their families.

NCAA basketball coaches Pat Skerry of Towson University and Tom Herrion of the University of South Florida created the Coaches Powering Forward initiative in 2014. Inspired by their sons on the spectrum, Skerry and Herrion asked their fellow coaches to wear the Autism Speaks pin during televised games the first weekend of February. More than 80 coaches and broadcasters took part in this simple demonstration of support. Since the inaugural campaign, participation has soared to include more than 400 college coaches and staff from the men’s and women’s divisions, as well as dozens of high school programs. Thousands of pins are worn during the weekend to raise awareness and spread a message of acceptance.

“Creating a more inclusive, kinder world for people with autism is about so much more than simply raising awareness; it’s about increasing understanding and acceptance of everyone in the autism community,” said Val Paradiz, vice president of services and supports at Autism Speaks. “With people like Coach Skerry and Coach Herrion helping to spread this message of inclusion, we can help people on the spectrum feel welcomed and supported on a broad scale.”

“As part of the NCAA family and the father of a young man with autism, I am grateful to all the people who support this campaign,” said Coach Skerry. “Each person with autism has different challenges and abilities, and our partnership with Autism Speaks is helping to create a more inclusive world for my son and so many others.”

“Year after year since 2014, we ask our colleagues in the college basketball community to show their support, and year after year, they amaze us with their response,” Coach Herrion added. “This campaign shines a light on the autism community and helps children and adults with autism, like Coach Skerry’s son and mine, feel supported, understood and accepted.”

Fans can also join the Coaches Powering Forward campaign and support Autism Speaks with a donation by texting “AutismHoops” to 44-321.