Researchers, regulators and community stakeholders convene to guide future studies on cannabis-related products for autism and its associated medical conditions 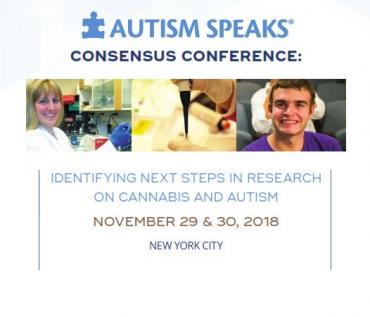 Autism Speaks recently hosted the first scientific leadership conference on research into the safety and potential benefits of cannabis-based medicines for autism and its associated medical conditions.

The two-day meeting, in New York City, brought together more than 30 leading researchers, government regulators and members of the autism community.

“Our focus is on understanding the scope of early research and regulatory issues,” says Autism Speaks Chief Science Officer Thomas Frazier. “Our goal is to develop consensus and guidance for the next steps in this emerging field.”

The need for leadership in this area is urgent, Dr. Frazier adds. “As more states legalize cannabis, we know that a growing number of families affected by autism are considering these products to relieve severe behavioral symptoms, seizures and other challenging autism-related conditions,” he says. “But while anecdotal reports of benefit are common, we lack sufficient scientific evidence on effectiveness and risks.”

The limits of observational studies

To date, most cannabis-for-autism research has been limited to observational study. This typically involves inviting people (usually parents of children with autism) to fill out detailed questionnaires about the use of cannabis products for autism and/or epilepsy. Around a third of people with autism also have chronic seizures, or epilepsy.

But insights from observational studies are hampered by the subjectivity of recollections and the uncertain potency and purity of most cannabis products. An exception is Epidiolex, a highly purified form of cannabidiol, a non-intoxicating component of the Cannabis sativa, the most common medical marijuana plant. Following extensive clinical testing, Epidiolex recently received Food and Drug Administration approval for the treatment of seizures associated with two rare syndromes that share some features of autism.

Guiding next steps in research

During the Autism Speaks-hosted conference, the field’s pioneers shared findings, limitations and challenges from their research. State and federal officials discussed their interest in addressing regulatory roadblocks to research with cannabis, which remains a federally controlled substance. Participating members of the autism community shared their personal experiences and hopes for further research.

The participants found consensus on several urgent issues such as the next steps needed in observational studies and the optimal designs for future clinical trials. They also agreed on the urgent need for standardized testing and more-accurate labeling of cannabis products available in a growing number of states.

“It was tremendously exciting to convene many of the pioneers in this emerging and important field of research,” says conference co-chair Greg Barnes. Dr. Barnes is a neurologist and the director of the University of Louisville Autism Center. “I was impressed by our shared commitment to coordinate and optimize future studies to best address the needs of the autism community,” he says.

Under Dr. Barnes’s direction, conference participants are summarizing conference findings and recommendations for publication in 2019.

“In direct partnership with the autism community, Autism Speaks remains committed to playing a leadership role in developing consensus and guidance for the research we need to advance understanding of the safety and potential effectiveness of cannabis products in autism,” Dr. Frazier says.

Read the full conference agenda and list of participants: “Identifying Next Steps in Research on Cannabis and Autism: An Autism Speaks Consensus Conference.”

Learn more about ongoing autism and cannabis studies below.

Note: Listing does not imply Autism Speaks endorsement or affiliation.

Science News
Study finds higher rates of gender diversity among autistic individuals
We're Here to Help Chat with Us
Autism Response Team Chat
There are no available agents at the moment.