I’ve been reading about probiotics for relieving GI distress – and even improving behavior – in individuals with autism.  Should I buy them?  What’s the best kind? 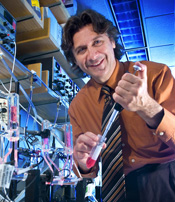 Guest post by Alessio Fasano, MD, chief of the division of pediatric gastroenterology and nutrition and director of the Mucosal Biology and Immunology Research Center and the Center for Celiac Research at the Massachusetts General Hospital for Children. Dr. Fasano is conducting Autism Speaks-funded research on GI issues and autism.

I love talking about probiotics because they are a promising potential treatment for  addressing GI distress associated with autism spectrum disorders (ASD). However, I also want to caution that research does not yet support their indiscriminate use in treating autism. Having said that, I and other researchers are actively studying probiotics, and here’s why.

In the last five years or so, we have developed technology that allows us to better study the composition and the genetics of the bacteria that reside in the gut. What we’ve found is that there are a number of conditions, including ASD, associated with imbalances in the gut’s bacterial “village.” Certain types of bacteria may overgrow to create imbalances that we call dysbiosis. This has been hypothesized for years. Now we have preliminary evidence to suggest that indeed there is an imbalance of bacteria in a subgroup of individuals with autism. If we can confirm this, then in theory, probiotics, or “good” bacteria, may help bring back equilibrium and health.

But there’s a lot we don’t know. In particular, we are trying to answer three key questions: Which bacteria are over-represented in these imbalanced systems? How abundant are they? And how do they interact with the host—the person with autism?

In animal models, we have identified certain kinds of bacteria that are abundant in mice with autism-like symptoms. Now, by studying the stool of children with autism, we are trying to confirm what we’re seeing in animals. We are also looking at whether dysbiosis causes inflammation in the gut. This could represent the immune system’s response to the overgrowth of these bacteria. If this inflammation travels to the brain, it can, in theory, affect learning and behavior.

I think we may find that, for some individuals, the inflammation is local, causing only GI symptoms. For others, the immune cells, once activated, travel to other parts of the body including the brain.

At the same time, we’re studying the effects of probiotics. We see them as potential peace makers that can help restore balance in the gut’s normal bacterial community. For example, we have evidence that giving probiotics to mice with autism-like symptoms improves their behaviors as it improves their dysbiosis. But such findings are preliminary. We can’t automatically apply them to people.

While I’m extremely sympathetic to parents who want to help relieve their children’s distress, I think we have yet to reach the point where we can say, “Yes, let’s give probiotics a try in children.” Currently, there are only two scenarios where science provides solid support for using probiotics. They include helping relieve food allergies and treating inflammatory bowel disease.

I have a great concern about widespread use of probiotics. We don’t want to make the mistakes we did in the past with penicillin, for example. We overused this antibiotic and others to the point that many types of bacteria became resistant to them. If we use probiotics the same way as we used penicillin, we may weaken thier usefulness as a treatment tool.

I have other concerns with the probiotics sold today. The Food and Drug Administration (FDA) does not regulate them as medications because they are considered supplements. As a result, there’s little to no quality control. The product you buy may contain ridiculously low levels of probiotics or no “live” probiotics at all. Worse, the probiotics may be mixed with potentially harmful bacteria.

In addition, there are different kinds of probiotics, including many types of lactobacilli and bifidobacteria, to name just two popular groups. I don’t believe all probiotics are equal. Each has specific effects in specific situations. So like different types of antibiotics, the clinician should select them wisely – perhaps based on the specific type of dysbiosis a patient has.

If you want to give your child probiotics, I recommend you avoid concentrated supplements and instead give your child a probiotic yogurt. (Check the label for the “probiotic” designation.) If you are intent on giving probiotic supplements, check the label for the amount of viable microorganisms in the supplement. The number should be in the billions. Finally, if you don’t see a clear improvement in a few weeks, stop using it. In other words, if there’s no clear benefit, don’t risk potentially negative side effects.

And stay tuned for further research findings! Thanks to the support of Autism Speaks and other organizations and federal agencies, we are continuing to advance our understanding of autism, inflammation and the role of gut bacteria, both good and bad.

Tool kit
ATN/AIR-P Autism and Medication: Safe and Careful Use

Science Blog
Autism and Mental Health in Young People
Science Blog
How the autism community guided the FDA
We're Here to Help Chat with Us
Autism Response Team Chat
There are no available agents at the moment.