'She is on my mind and in my heart:' A brother's story

This blog post was written by Mike Anaclerio, a high school teacher who raises autism awareness in memory of his sister, Mary. Anaclerio walks for the Chicago Walk Now for Autism Speaks chapter. Read his touching story about his sister below. You can donate to his walk page here. 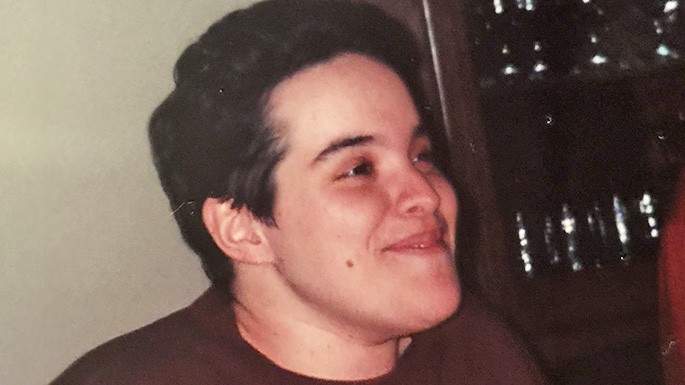 This was my sister Mary’s response any time I asked her a question. is My name is Mike Anaclerio and I am the youngest of three. I live in the south suburbs of Chicago, and I am high school teacher. My sister Beth is the middle child and lives in San Diego, and my oldest sibling is Mary who had autism. Mary was 41 years old when she lost her battle with cancer in October of 2012.

Mary was diagnosed at age 4 with autism at the University of Chicago hospital. My parents went to the local library after meeting with the doctor and found one book about autism. The explanation for having autism in the mid 1970’s was “refrigerator mom.” What an awful thing for my mom to have to read after learning her firstborn has autism. There was no Autism Speaks in the 1970’s, and in some schools, no special education programs to help my sister. 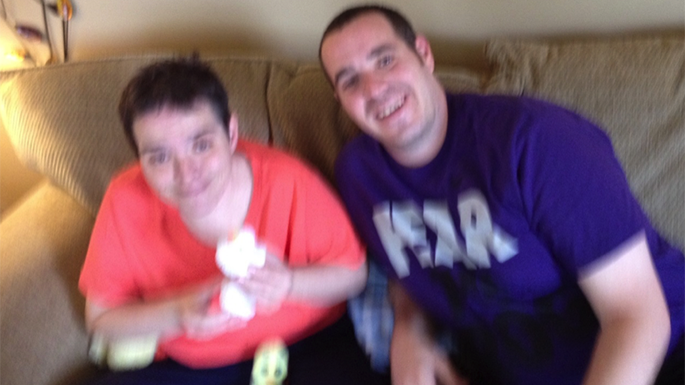 It's not easy to explain to people what it means to be a sibling of someone with autism.

I learned a lot from Mary during her life. I became a teacher because of her; I wanted to do something with my life that involved helping others. She taught me more about life than I could ever have imagined growing up.

Speaking of growing up, Mary did not like me when I was young. I was nothing but a pain in her side for most of my childhood. There was not much I could say or do that would make Mary happy when I was young. Me coming along was a change in her life. Mary did not do well with change. Mary became aggressive to the point my parents made the difficult decision to put her in a residential placement in Indianapolis when she was 15. They had to go as far as to go to court and give custody of her to the state so they would pay for it. There was no such programs in Northwest Indiana to help her, where we were living at the time.

Things changed when I turned 16 years old: I got my driver’s license. Now I was able to drive, which meant I could take her to McDonald’s or Dairy Queen whenever she wanted to go!! I was no longer the pain in the butt, I was her younger brother who could drive and take her anywhere she wanted to go eat. Mary grew to love me during this time. We were able to talk without her yelling at me or leaving the room. It took over 16 years for Mary to adjust to me being part of the family and her brother. If the first 16 years of my life were a struggle for me and Mary, I can tell you that the next 16 years with her were the absolute best of my life. I got 32 years with Mary. We knew how to make each other laugh, and we knew how to push each other’s buttons.

The whole time, I was getting an education from her on what life is really about.

It wasn’t just about being able to take her wherever she wanted though, it was about life. I learned what unconditional love was, what it was to have perspective on life, and what it meant to have patience. I learned all of these important values at a very young age. I am forever grateful to Mary because of this. I do not know what type of person I would be without having had her in my life. Beth and I had to grow up faster and be more mature than our friends. People in public would stare, make comments, and even laugh at Mary. Even at a young age, it pained me to witness that. I cannot imagine what our mom and dad were feeling. Standing up to kids much older than me became a common occurrence in my neighborhood because of their actions towards my sister. The word “retard” was used a lot towards my sister when we were growing up. This word cuts deeply, and I cannot even stand the sound of it. Mary did not ask to be born with autism. Imagine being a parent or sibling and hearing your child, brother, or sister called that. I speak from experience that it is painful.

Mary lived life the way most of us dream of: she slept when she was tired, ate when she was hungry and didn’t talk to people she didn’t like. She had an incredible memory that everyone who met her were in awe of. She wanted to know your birthday and your parents’ names when she met you for the first time. All it took was that one time and she knew it. 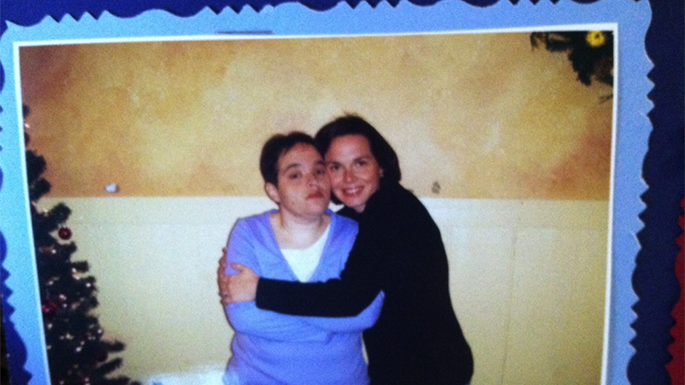 People were fascinated when they would see her after months or even years had gone by, and she would tell them their birthday and their parents’ names.

She was also good with dates. You could ask her what day of the week June 1, 1986 was, and she would know the answer immediately.

When anyone passes away, it is sad. This what I tell people when they ask me about Mary dying. Someone dying of cancer at the age of 41 is worse, and that 41 year old having autism and not knowing what is happening to them is one of the worst.

My mom made the difficult decision to tell Mary that she was not going to get better and that she would be going to heaven. Immediately, Mary began asking questions about what was going to happen in heaven. Mary started off by asking my mom to help her pack her clothes so she would be ready to go.

My mom told her she didn’t have to worry about snow or cold weather anymore, and that it was beautiful every day in heaven.

Mary, who never like storms, responded, “Are there high-winds in heaven?”

My mom told her that she would get to have her room however she wanted it.

Mary’s response was, “Can it be pink?”

My mom told Mary she could go eat whatever she wanted, go to get her hair cut, and so on.

Mary asked, “Who is going to bring my couch to heaven so I have somewhere to sit?” That is who Mary was and how she thought. She always needed the basic questions answered.

My mom made the decision to donate Mary’s brain to the Autism Tissue Program. Her brain tissue is currently being studied with other female brains.  Our hope is that research will help future generations find a cure for autism.

Since her passing, I have made it a priority in my life to continue to help others affected by autism. I put together a district-wide fundraiser the year after she passed away. We raised $7,000, which went to the Chicagoland chapter of Autism Speaks. 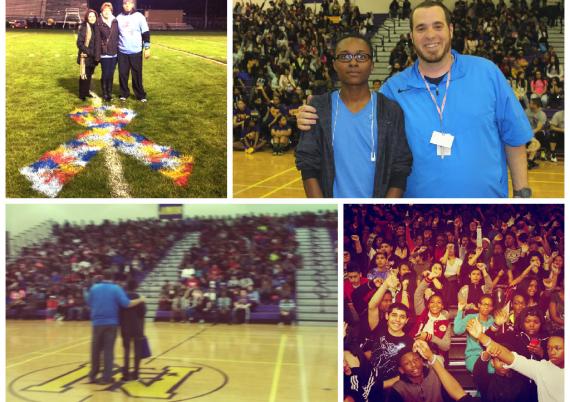 I was asked to be on the walk committee this year for the Autism Speaks Chicago Walk at Soldier Field. I am very excited to be a part of the walk in this way! A couple weeks ago on April 2nd (World Autism Awareness Day), our school sold the Autism Speaks wristbands to students to get into the student vs. faculty basketball game. We sold 1,000 wristbands!! Myself and a student whose younger sister has autism spoke to the student body before the game.

Mary was my buddy, and Beth’s and my best friend. To me, the best times in my last 16 years with Mary were when it was Beth, Mary and me together. The silliness of the conversations between us will probably never be understood by anyone except the three of us. It’s one of many special perks of having a sibling with autism. We talked about absolutely nothing of significance to “normal” people, but to Mary, having her brother and sister in the same room and being able to pepper us with questions was what made her the happiest. I know I speak for Beth when I say it made us happy too.

She was the best thing that happened to our family. Mary is on my mind every day, and also in my heart.

I got the autism puzzle piece tattooed over my heart with her name how she wrote it on her state ID. Life is not the same without her for us.

We lost the best thing that ever happened to us, but in her 41 years she taught us lessons and gave us memories that will last forever.

Her legacy is important to me, and I want my two young boys to know what an incredible person their aunt Mary was.

This is Mary’s piece of the puzzle. 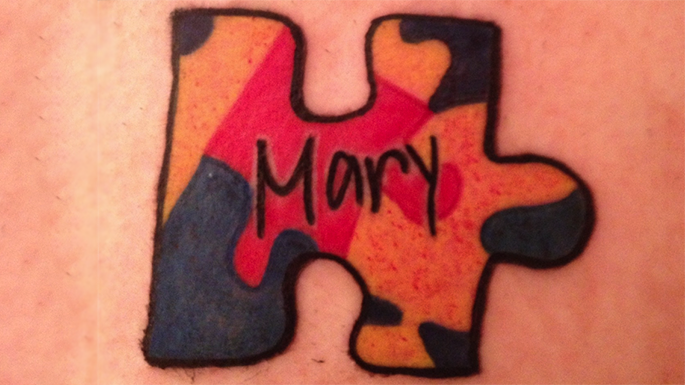