As my son turns 13, I reflect upon the years passed by. 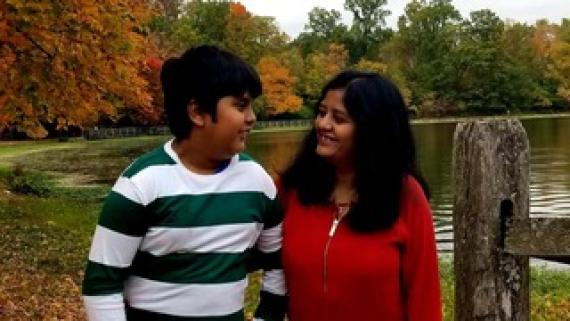 Tulika Prasad is mom to Vedant who is on the autism Spectrum. She is a computer engineer by education and an Autism Advocate by passion. She is an Autism Speaks volunteer Advocacy Ambassador and also volunteers locally for autism acceptance and awareness. Tulika is also a blogger and can be found at BrainDroplets.

As my son turns 13, I reflect upon the years passed by. Those who have been a part of our journey would agree that our journey has been nothing short of extraordinary. As compared to most, our joys and our challenges have been different in so many ways and surprisingly similar in just as many. Growing with my son has been heuristic.

The past 10 years have taught us lessons in humility, acceptance, and perseverance and this is just the beginning. While I could write pages on what the experience so far has been, here are just a few things I’ve learned.

1. It’s both a sprint and a marathon - I have heard many special needs parents say that we need to slow down because raising our kids is not a sprint, it’s a marathon and we need to judiciously use our energy. It really is a wonderful advice and generally speaking, it works great, except, sometimes you have to run a sprint within this marathon too, and then take a rest before starting again. Some challenges can take up all your emotional and physical strength no matter how much you try. It would feel like a sprint then, that will need you to push your limits and give it all you have, and drain you of your energy. Though these might differ for different parents, these will happen. However, the reward at the end is worth every bit of sweat and tears when you see your child succeed or overcome a struggle. For the most part, though, it is a marathon where the key is patience and persistence. There is no other way out.

2. There will be bad days - Let’s not sugar coat it, doing autism is not easy. Period. Not for the caregiver, not for the individual with autism. There will be days when you would want to give up, walk away or just crawl in a hole and cry but that’s not even a choice. Very often I have hidden behind a facade of courage and smiles to cover up the vast hinterland of worries that I sleep with every day. You keep going. That’s how you do it. It’s an exhausting journey. When difficult days overwhelm you, rest, not quit. What will make it all worth it are the big and small victories that will come along the way, the miracles you never expected, and the pure, unconditional love that you get from your child. There will be bad days but the exceptional days will make the miserable days insignificant, trust me. Just hang in there. It gets easier. Sometimes.

3. One day at a time - It might sound counterintuitive that we call this a marathon but still want to take it one day at a time but if you think about it, that’s how you run a marathon. One step at a time. While it might be tempting to think far ahead and wonder what the future holds, that is where it can get stressful. If the future scares you, try to change it by focussing on the present. Channel your energy towards helping your child overcome obstacles that s/he is facing now. It’s easier to face a challenge when you break it down into bite-size pieces and try to tackle it piece by piece. Let the future unfold one day at a time. Plan ahead, definitely, but don’t get overcome by it. For someone with a special needs child, the future can sometimes look really depressing and scary. It can make hoping for the best really challenging and can demotivate you. So, take everyday as it comes. Worrying will only make your present difficult to deal with.

4. Self-care - To say that the last 13 years have been demanding would be an understatement. I had to give up quite a few things to adjust to our new circumstances. Our social life took a hit. Our ways of entertainment were limited. How and where we could vacation changed. I quit my job. We had quite a few changes that we needed to do to ensure our son was supported and that we were respectful of his limitations. I would be lying if I said that these changes, did not affect me and pull me down sometimes. I felt isolated, exhausted, and often defeated. The initial few years were the worst. I felt like I needed to do everything and do it now. My entire focus was my son, he still is but the I have found a pace that works best for both of us. A routine that lets me unwind and take care of myself too. I have learned to sneak a nap, watch my favorite show, read a book (well, audiobook), or hang out with friends once in a while. It’s important to bring the attention back to myself sometimes so that I can give that attention back to my son. Self-care is important. It does not necessarily have to be an indulgence, but it definitely has to be something that gives me a break and the time to recharge myself.

5. Learn to forgive - When others judge you, forgive them. Their ignorance got the better of them. When people are mean to your child, stand up to them and then forgive them because you can't let your energy get wasted on those who mean nothing. Grow a thick skin because it will keep you sane. I have lost a lot of sleep over how people respond to my situation. I gained nothing out of it and it cost a lot of my sanity, energy, and positivity in the rage that followed. Forgiveness has made it much easier to deal with all of that now. When you judge yourself, forgive yourself. You are not a supermom, don’t ever think that. Don’t let others make you believe that. You are human. Make mistakes, take a break, be selfish sometimes and think about yourself. You deserve understanding and forgiveness. You know you do your best and no one, absolutely no one gets to judge you, not even you.

6. Smarter than you think - I have made this mistake so often. I have assumed my son is not capable of doing something or I have been told and convinced by professionals who claim to be omniscient that there are things my son won’t be able to do. And then he shows us that he can. He does not talk. Can not. He just does it and makes us look stupid and that makes me so proud. I have repeatedly reminded myself that I need to presume competence. I have been proven wrong by my son so many times that I know now that he is definitely smarter than I think he is. He can handle challenges better than I think he can. He can do it. All he needs is for someone to believe in him. Someone who is ready to stand by him, let him take his time and learn at his pace. Someone who trusts his abilities. These last few years have taught me that he is capable of much more than I credit him for. He might not do everything his peers can but he is still way ahead of where I tend to place him. He does not have just feathers, he has wings, if only I let him fly.

7. Acceptance cannot be partial - A few years after my son’s diagnosis, I started believing that I had reached a point where I was ready to accept my son’s autism and move on. I said this often that I hated his autism, not him. Now, when I look back, it does not make sense. Autism plays a major role in shaping what my son is. If I love my son, I have to accept his autism as well. As a friend said very eloquently “ The truth is that parts of his autism can be extremely burdensome for him (and for me). However it’s important to take in both the darkness and the light when connecting..he deserves that. There should be no shame in that. It’s the ultimate form of acceptance… we are different…The differences can be positive and empowering. They can also be negative and demoralizing. Neither makes him less. It makes him human”. When I accept autism, it makes it easier for both my son and me to connect. He is perceptive enough to know that I accept him in his entirety and will respond better when I see him for what he is and respect him for the way he is. While I could go on and on with what I have learned, this definitely is a summary of what is at the top of my mind. I know that this is just one lap of the marathon that we are into. While it had its unique challenges and milestones to focus on, the next few years will be different. They will be about teen challenges and a whole new set of skills to focus on. Some that would be similar to all teens out there some that would be due to my son’s autism, some that I will be clueless about and struggle more, some that we will overcome with our perseverance. I will learn new things, gain a whole new perspective and see an even more extraordinary side of my son. I know that my journey ahead traces a path that is riddled with extraordinary situations but I also know that I need to own that road. No matter what the adversities, there will be enough beauty and magic along the way to keep us going till the end.