For my teen with autism, shaving is a two-person job

Judith Ursitti is the Director, State Government Affairs of Autism Speaks Advocacy. She is also a runner and mom to Amy and Jack. 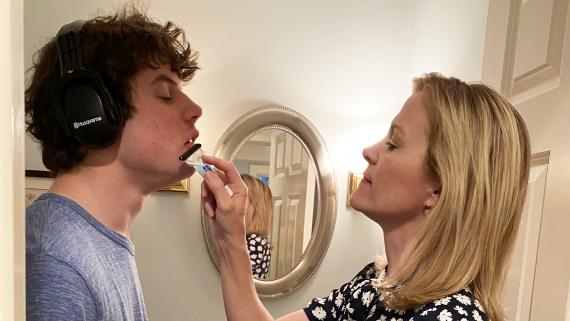 Our focus has been developing meaningful connections and spending time on activities Jack enjoys. But transition to adulthood and all of the intricacies related to guardianship, employment, day programs, housing, etc. can feel overwhelming – and steal our focus and energy. The Autism Speaks Transition Toolkit breaks down a lot of these complicated issues so we can keep the focus on Jack. I also have many friends who are autistic adults who provide insight on what the transition years were like for them. Developing a team of people who see Jack as a person is so important, too. Jack participates in his IEP meetings and the team looks to his presence and behaviors as a guide for the development of goals.

We started working on hygiene skills with Jack when he became a tween. It’s such a critical group of skills in the transition to adulthood we’re working toward. Jack still needs a lot of assistance with many things, but he continues to learn things on his own timeline. We have what's called a visual task analysis that breaks down his daily hygiene routine into steps. The visuals and steps help Jack immensely. Our goal for him is to be as independent as he can be. He deserves that.

We started shaving Jack when he hit his teenage years. I was so afraid that I would cut him! My husband and I shared shaving duties. One of Jack's home therapists has also been super helpful with working on hygiene with him. It's been a tag team approach. My husband, Andy, is far more comfortable with a standard razor. I was a little nervous so for a while, I just used an electric razor with Jack. That wasn't ideal but at least helped him not have a mustache as a teenager!

Then we tried the Gillette TREO after hearing about it in Time Magazine. It’s not a razor you shave yourself with like everything I’ve ever seen – it’s specifically designed to shave someone else. The design of the TREO has been a game changer for our family. The handle is comfortable for me to hold and has a unique, clear shave gel that is built right in. You can use it anywhere, anytime. No water or anything else is really needed, and there’s no need to rinse the gel off at the end. The angle of the blade is set in a position so it's not awkward for the caregiver who is doing the shaving. The single blade gives a close shave, but doesn't easily nick the skin.

Knowing that engineers and product developers, who could focus on something else but who have taken time to really see people like Jack and then create products for unique challenges like shaving, is so validating. This makes our day-to-day routines just a little bit easier and that makes a HUGE difference to families like ours. 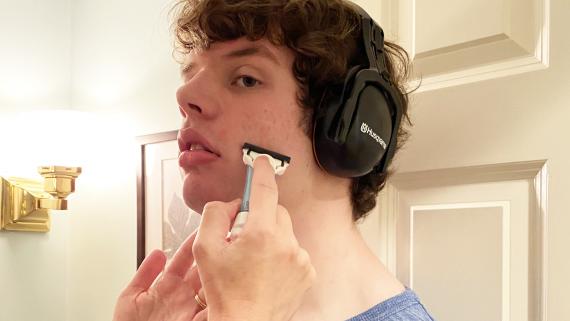 Jack's happiness is our number one priority. Jack loves people, loves to listen to music (currently Maroon 5 is a top pick), and also is extremely active. He runs and swims for exercise and is a member of our high school cross country team, running with a guide. He is excelling in his VOC program at school and loves to travel, with airplanes and trains being his favorite modes of transportation. He asks to go on an airplane pretty much every day.

Transition to adulthood is such an important phase of life for many people with autism. Independence is so important. Jack is an amazing person and his dignity and preferences are a top priority.

Autism Speaks has partnered with Gillette TREO to spotlight the importance of the transition to adulthood and to tell stories like Jack's to help families in the autism community best prepare their children for a fulfilling adult life. Learn more about the partnership.

Blog
In our own words: Autistic college students prepare to go back to school during a pandemic