The day my son taught a bully a lesson 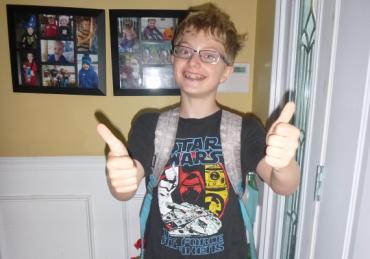 “Mom, Mom, a boy said autism is a boo-boo on the brain, and I told him it’s not and I do not have a boo-boo!” My youngest son burst into the house with these words, hurling them at me along with his coat and the shoes that the strong kick of his feet have dislodged. “You were right Zach” I say, but he is already off on another tangent, begging for technology to cap off his day.

I give in because he’s had a really good one, and make a mental note to call the person who runs his autism sibling support group the next day. She will report that things happened exactly as Zach told me and that he corrected the boy rather indignantly.

I could not be more proud of him.

Like Zach, I don’t believe autism is a “boo-boo on the brain.” I believe the autistic brain is simply wired differently, is not broken, does not need to be “fixed” by a band-aid either literally or metaphorically. Does that mean I don’t work every day to mitigate certain aspects of autism, particularly in my more severely affected son? I do. Would I give anything for my eldest son’s autism to be reduced enough so that he could care for himself when his father and I are gone? You bet. Do I strive daily to lessen the aspects of autism that cause my youngest son distress? I do indeed.

I think this mindset has helped Zach accept, even embrace, his autism. He knows we aren’t trying to get him to assimilate. I would do nothing to erase his unique world view- I simply want him to be as happy and productive as possible, and the same goes for my other son.

And it is evident to me that everything my husband and I have ever said has stuck in that unique brain, to be pondered and analyzed and digested at his own rate. I am again reminded how important it is for his father and I to live and say what we believe.

At the end of his fifteen minutes of Nook he begs for more time as I knew he would, and this time I deny him his demand, as he needs to go to bed. I ask him if he’s okay with what the boy said tonight, and he responds in a somewhat exasperated tone with a “Yes, Mom,” then begs for more time to read before lights out. For this request I acquiesce, but not before leaning into him with a hug and an “I love you just the way you are.”