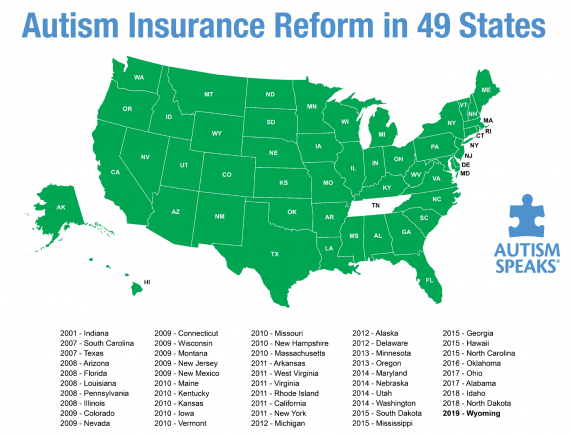 The bulletin issued by the Wyoming Department of Insurance specifies that all insurance plans, whether grandfathered, non-grandfathered, transitional, or self-funded Multiple Employer Welfare Arrangements, must come into compliance by July 1, 2019.

“We applaud the Wyoming Department of Insurance for issuing this comprehensive, far-reaching bulletin, which will literally change lives of individuals with autism in Wyoming,” said Lorri Unumb, Autism Speaks Vice President of State Government Affairs. “When I met with department attorneys in Cheyenne last year, I could tell they wanted to do the right thing; they just needed to find the right opportunity, and today they did.”

Nationally, efforts to expand autism insurance coverage began in the early 2000’s and have continued every year since then. While we celebrate Wyoming as the 49th state to address coverage of autism, we recognize the gaps in coverage that still exist in Tennessee as well as states where the coverage is not universally available.

Timely access to medically necessary treatments, including ABA, can change the trajectory of a person’s life. However, autism families routinely face obstacles in accessing and affording this care for children, transition age-youth, and adults with autism.

Autism Speaks will continue to work toward improving coverage for autism treatments across the country through the expansion of existing state insurance mandates and by ensuring access to medically necessary care pursuant to Medicaid’s Early and Periodic Screening, Diagnostic, and Treatment mandate.

Podcast
Adulting on the Spectrum: Exercise, sensory Issues and starting a business

Blog
A parent’s perspective on understanding challenging behaviors associated with autism
We're Here to Help Chat with Us
Autism Response Team Chat
There are no available agents at the moment.