TODAY AT INSAR: Daily Updates from the 2018 meeting 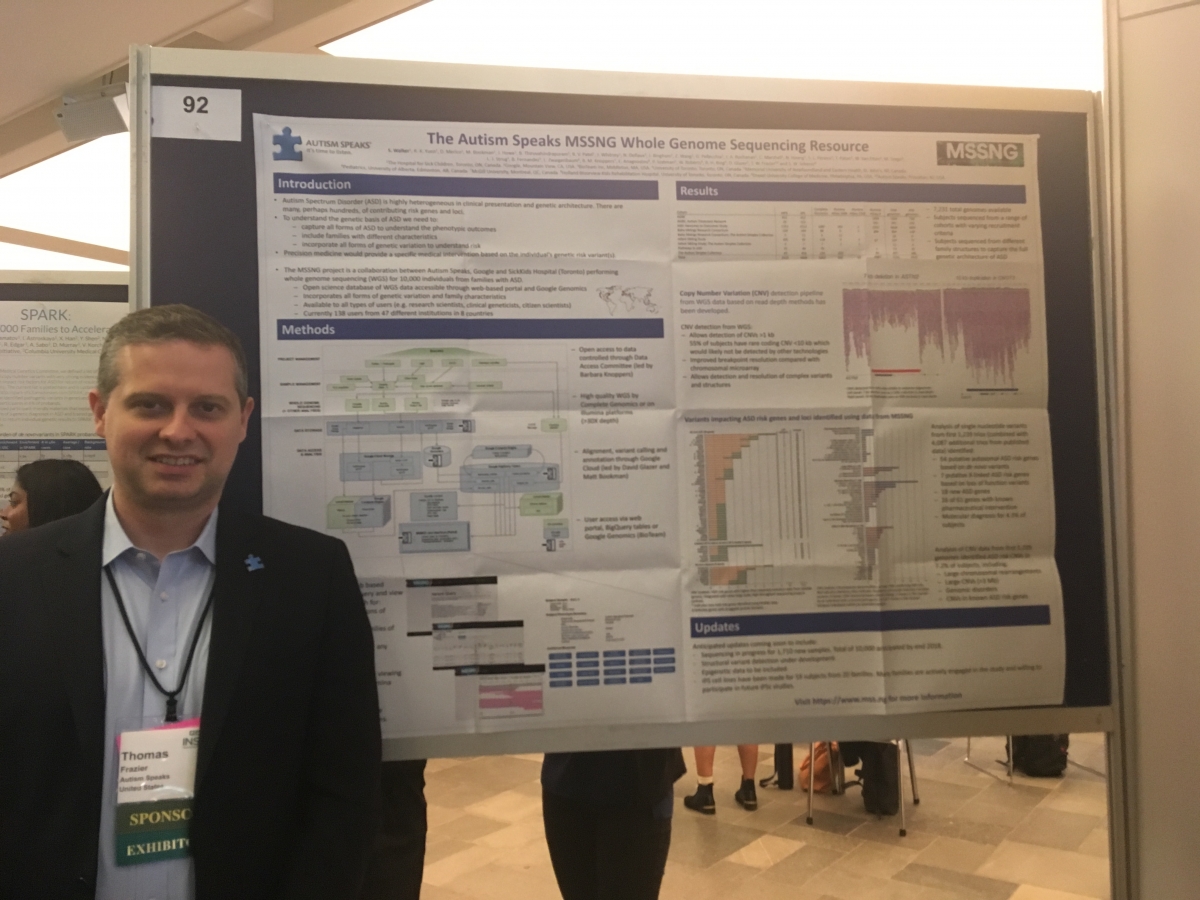 May 11 at INSAR 2018, researchers with the Autism Speaks Autism Treatment Network (ATN) shared the promising early results of a pilot study evaluating the benefits of an online program that teaches parents resiliency skills that buffer daily stress and its emotional and physical toll.

Karen Kuhlthau, of Massachusetts General Hospital, led the study, which was funded through the ATN’s role as the federally funded Autism Intervention Research Network on Physical Health, which Dr. Kuhlthau directs.

The online program – called the “Stress Management and Resiliency Training/Relaxation Response Resiliency Training Program” (SMART-3RP) – is based on the principles and practices of mind-body medicine. It consists of nine, 90-minute sessions using skill-building exercises to teach a variety of relaxation techniques such as meditation, conscious acceptance and yoga.

The investigators enrolled 51 parents from across the United States in the study. Thirty-three, or 65 percent, completed at least six sessions – suggesting that the program was practical to use.

The results: On completion, participants gave the program an average score of 7.9 on a 1 to 10 scale of effectiveness in reducing their stress-related symptoms. Participants also reported significant improvements in resiliency, stress coping, social support and mindfulness over the course of the program. Most of the participants were mothers (89 percent), white (78 percent), married/partnered (76 percent) and had a college degree (80 percent).

“We are encouraged by the benefits that parents of children with autism reported from this practical and easy to access program,” Dr. Kuhlthau says.

What’s next? “Going forward we hope to improve the program by making it easier to implement and shortening the sessions,” Dr. Kuhlthau adds. “We also hope to perform a larger trial with a more-diverse group of parents.” The goal of this research to develop a program that’s widely accessible and effective in improving parent and child well-being.

This INSAR presentation was part of a larger scientific session on “Family Issues and Stakeholder Experiences.” Find the full program of Autism Speaks-supported studies at INSAR 2018 below.

In recent years, research has found that people with autism tend to have lower bone density and more fractures, on average, than is typical for their ages.

May 20 at INSAR2018, researchers with the Autism Speaks Autism Treatment Network (ATN) presented the early findings of a study exploring possible causes and solutions. The research was funded through the ATN’s federally funded role as the Autism Intervention Network on Physical Health.

The study’s participants included 49 boys, ages 8 to 17, seen at MassGeneral Hospital for Children. Roughly half (25) had autism, and the others served as a comparison group.

The researchers assessed bone mineral density at multiple places in the body. They also asked the boys and their caregivers to complete a three-day diet and exercise diary.

The results: As expected, the boys with autism had lower bone density overall than did the comparison group of boys who didn’t have autism. In addition, the researchers found:

Calcium and phosphorus play important roles in bone formation, and both are particularly abundant in dairy products and fish. For children on dairy-free diets, supplements containing calcium and phosphorus may be needed, Dr. Neumeyer says. She calls on healthcare providers to assess dietary intake of dairy and protein in children with autism as part of their wellness care and be mindful of the increased risk for low bone density among these children.

What’s next? The research team hopes to expand the study to include more children with autism – including girls – to learn more about their nutritional needs and risk for low bone density and fractures.

This INSAR presentation was part of a larger scientific session on “Medical and Psychiatric Comorbidity.” Find the full program of Autism Speaks-supported studies at INSAR 2018 below.

Understanding how adolescents with autism decipher emotions in others

On May 10 at INSAR2018, Autism Speaks Weatherstone Fellow Katie Jankowski presented the early results of her study looking at how teens and tweens with autism decipher self-conscious emotions like pride and embarrassment in other people.

Her findings counter the common belief that people with autism suffer “mind blindness,” or the inability to read emotions in others.

To the contrary, Jankowski found that, while many adolescents with autism have difficulty automatically inferring what another person is feeling, they appear to deduce emotions based on logical expectations and the social rules that they’ve learned. This approach can present difficulties when there’s a mismatch between what another person might be expected to feel in a situation, she notes.

Jankowski enrolled 56 adolescent boys, ages 11 to 17, in her study. Thirty had autism, and 26 served as a comparison group. All had average to above-average intelligence (IQ).

She showed the boys four video clips of singing performances and asked them to rate each performer’s pride or embarrassment on a 1 to 4 scale.

The results: In one clip, a teen sings poorly and makes a face that clearly conveys embarrassment afterwards. When asked how the teen in the video was feeling, all the study participants – including those with autism – correctly rated the performer as “embarrassed.”

Similarly, they all correctly rated as “feeling proud” a teen who sang well and clearly looked pleased with the performance.

While the boys were watching the video clips, Jankowski also tracked their brain activity with an MRI scanner. While all the boys shared similar patterns of brain activity, those who had autism had some atypical activity in parts of the brain associated with processing social cues and sensory information as well as picking out relevant information from a scene.

This could suggest that people with autism rely more heavily on abstract understanding of social situations and logical expectations versus automatic recognition of emotions, Jankowski says.

What’s next? The goal of Jankowski’s Weatherstone Fellowship project is to improve social-support programs and other interventions for people with autism who need and desire them.

This INSAR presentation was part of a larger scientific session on “Social Cognition and Social Behavior.” Find the full program of Autism Speaks-supported studies at INSAR 2018 below.

Since 2015, Autism Speaks has been working closely with the World Health Organization (WHO) to develop and adapt its Caregiver Skills Training Program for underserved communities around the world, including the United States.

The program adapts evidence-based strategies to give parents, teachers and other community members practical and culturally appropriate strategies to support the development of children with autism and other developmental disorders.

May 10 at INSAR2018, Autism Speaks-funded researcher Rosa Hoekstra and her team described the process they were using to adapt and evaluate the Caregiver Skills Training for communities in Ethiopia.

During the consultations, participants agreed that the program was addressing an urgent need in a practical and culturally appropriate way. They also made several recommendations for making the program more effective, acceptable and feasible in Ethiopia.

The results: Based on the feedback they received, the Ethiopian team is now testing an adapted Caregiver Skills Training program in Ethiopia. Its customized features include:

What’s next? The Caregiver Skills Training team in Ethiopia is also looking for new partnerships with community health organizations to better meet the needs of children and families affected by autism and other developmental disabilities.

This INSAR presentation was part of a larger scientific session on “International and Cross-Cultural Perspectives.” Find the full program of Autism Speaks-supported studies at INSAR 2018 below.

On Wednesday May 9, at the annual INSAR press conference, social neuroscientist Daniel Yang, of The George Washington University, described his team’s discovery of a potentially important difference in brain development between boys and girls on the autism spectrum.

The finding may help account for the so-called “female protective factor” that results in autism being much less common in girls and women than in boys and men.

Autism Speaks helped launch Dr. Yang’s autism-research career with a 2014 Autism Speaks Meixner Postdoctoral Fellowship in Translational Research. He is now continuing his research with the support of National Institutes of Health grant to Kevin Pelphrey, one of his Meixner fellowship mentors.

The team began their study by using brain scans (MRI) to look at the thickness of the cerebral cortex – the highly folded sheet of brain cells that forms the surface of the brain – in 93 boys, ages 8 to 18, roughly half of whom had autism. (The two groups were matched across age and cognitive abilities.)

In particular, they examined a cerebral cortex brain network surrounding a brain structure called the right posterior superior temporal sulcus. This network is highly involved in social communication – for example, in understanding the intention of someone else’s eye contact or other actions. (Social communication disability is one of autism’s core symptoms.)

The results: The George Washington investigators discovered that this region of the cortex thinned significantly faster with age in the group of boys with autism compared to the group of unaffected boys. (See graph above.) They also found that, within the group affected by autism, the age-related cortical thinning was faster in the boys who had the most severe social-communication disabilities.

Next, the researchers tested whether there were similar autism-related differences in cortical thinning in 48 girls who had autism, compared to 45 unaffected girls. They found no evidence of advanced cortical thinning in this region of the brain or elsewhere.  (See graph above.)

Take home message: This suggests that autism may be neurobiologically different in boys and girls, at least for this brain network, Dr. Yang says. It’s also in line with a possible female protective effect, he says, in that the girls appeared to be less “vulnerable” to a possible disruption in the cortical thinning schedule in this brain area – which is critically important for social communication.

What’s next? “Our goal,” Dr. Yang says, “is to establish a solid foundation of science-based understanding that can guide the development of more accurate diagnosis, personalized interventions and support services for those who need and want them.

Autism Speaks is proud to be a longstanding sponsor of the annual meeting of the International Society for Autism Research (INSAR), this year in Rotterdam, the Netherlands, May 9- 12. The conference is the world’s largest gathering of autism scientists, doctors, therapists, parents and individuals on the spectrum.

Events include more than 20 scientific presentations by Autism Speaks science staff, funded researchers and clinicians in the Autism Speaks Autism Treatment Network. Each provides a glimpse into the early findings of one or more highly promising research projects that was competitively selected for presentation by the INSAR leadership.

“Autism Speaks is honored to continue our sponsorship of the INSAR meeting as the leading conference for discoveries in autism research,” says Autism Speaks Chief Science Officer Thomas Frazier. “The studies presented this year cover the full range of research from genetics and biology to early brain changes to the delivery of tailored interventions. They represent meaningful advances in our understanding of the biology of autism and improvements in our ability to deliver interventions that improve lives.”

Science News
Whole genome sequencing reveals new type of genetic influence on autism
We're Here to Help Chat with Us
Autism Response Team Chat
There are no available agents at the moment.