Video training for parents of babies at risk for autism

In 2015, we reported on the encouraging early results of a study evaluating iBASIS, an early intervention program that uses video feedback to show parents how to foster social development and communication in babies at high risk for autism. Each parent receives six to twelve in-home feedback sessions with a therapist who videotapes the parent and baby playing and otherwise interacting.

The research, funded in part by Autism Speaks, aims to reduce the severity of early autism symptoms and improve parent-baby interactions.

The researchers call their program iBASIS for “Intervention in the British Autism Study of Infant Siblings.” Like the Autism Speaks Baby Siblings Research Consortium in North America, the United Kingdom’s BASIS team studies the “at risk” younger siblings of children already diagnosed with autism. Because autism tends to run in families, the younger brothers and sisters of children on the spectrum are five times more likely to develop autism than are children in the general population.

This month, the BASIS investigators reported on their follow-up of the 54 babies in the original study, roughly half of whom received the parent-training intervention with the others serving as a comparison group. They re-evaluated the children at 27 and 39 months of age, or roughly 1 year and 2 years after the end of the video-feedback training of their parents.

As hoped, the researchers found that the parent training significantly reduced the severity of the children’s autism symptoms at both follow-up points.

“Our findings indicate that using video feedback-based therapy to help parents understand and respond to their infant’s individual communication style during the first year of life may be able to modify the emergence of autism-related behaviors and symptoms,” says lead investigator Jonathan Green, a pediatric psychiatrist with the University of Manchester. 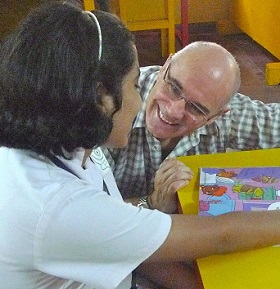 We asked Dr. Green to delve deeper into what the findings mean for families affected by autism, in the following interview:

Autism Speaks: Dr. Green, were you surprised that the benefits of your video training remained significant two years after the intervention ended?

Dr. Green:  Well, we hypothesed that we might achieve a long-term effect, but it’s always a pleasant surprise when the data actually supports your hypothesis! At the beginning of our study, the 9-month-olds who had high familial risk had overall increased levels of autism symptoms compared to babies in families not affected by autism. By the end of the 2 year follow-up period, the group that received the intervention showed a reduction in symptom scores that put them into the low risk, or typical, range. By contrast, the high-risk babies whose parents didn’t receive the training continued to have high symptom scores.

Autism Speaks: When you followed up at 39 months of age, did you expect to see fewer autism diagnoses in those who received the intervention?

Dr. Green: We never really expected to see an intervention effect on the number of autism diagnoses because of the small number of children in the study. On average, autism affects about 20 percent of babies in high-risk sibling studies, compared to less than 2 percent in the general population. So out of the 54 high-risk infants total in our study, we expected roughly ten of them might be diagnosed with autism by the end of our follow-up. We ended up with 6 diagnoses, including 4 out of 28 in the treatment group and 2 out of 26 in the non-treatment comparison group. These numbers are just too small to determine any significant difference in diagnosis rates between the groups.

What we could see was a significant decrease in the severity of autism symptoms as measured on scales that are sensitive to such changes.

Looking to the future, we think that a study enrolling more than 200 high-risk baby siblings will be necessary to detect whether this intervention can make a meaningful difference in whether a child does or does not develop diagnosable autism.

Autism Speaks: Your intervention teaches parents how to encourage babies to initiate social engagement while curbing their tendency to direct the interaction. Please explain why this is important.

Dr. Green: One of the ways some parents respond when perplexed by an infant’s atypical social cues is to become directive. By that, I mean stepping in to complete the child’s attempt at communication or trying to direct it into a more typical fashion. It’s an intuitive thing to do, and it can be helpful in some contexts. We’re not implying that these parents aren’t parenting well. Yet in babies that are vulnerable, this type of parent direction can have the opposite of the desired effect. It can result in the baby engaging less – not more – with the parent.

So our method encourages parent to “watch and wait” and resist the temptation to intervene too early. Be alert and seek to understand your child’s style of communication and then respond to it in kind. We believe this fosters social development by encouraging the child to initiate social interactions. Previous studies in both typically developing and autistic groups have provided much evidence to support this idea.

Dr. Green: First, we help parents become alert to a child’s subtle attempts at communications with gestures or verbalization. Next, they learn to work out what the child may mean. For instance, the baby may make a face at a toy as if to say, “Oh, that’s a bit scary.” Once the parent notices this, he or she can respond with empathy and mirror the child’s point of view in emotion or simple words. This engages the child and invites further response in turn. We call this type of to-and-fro responses a “sensitivity chain.”

Mealtimes are another great opportunity for sensitivity chains – with caregivers observing and responding with empathy to the child’s reaction to foods. By contrast, someone using a directive style might attempt to train the child to eat certain foods or eat in a certain way by correcting and repeating directions.

Our approach elicits understanding and then response – an approach that developmental theory suggests will improve social engagement and learning.

Autism Speaks: Over the nearly 3 years you tracked these babies, did the differences in symptom severity and social communication suggest that the intervention was producing fundamental changes in brain and behavior development?

Dr. Green: This is something we’re currently investigating. In our first paper in 2015, we reported an indication of effectiveness on a key predictor of autism in infants. It’s called attention disengagement. This describes difficulty shifting attention away from one thing to focus on something new – sometimes called “sticky attention.” It can result in a relatively rigid or inflexible focus. Our intervention reduced this symptom substantially – moving it from the severe, or high-risk, range into a typical range. Now we’re studying the brain physiology behind these differences in awareness and behavior.

We think such changes in behavior reflect some kind of fundamental change in the trajectory of social development – an effect that continues after our training has ended. That’s why our follow-up report – continuing our observations into the years after the intervention – is so important. That we could still see this improvement long after the end of the intervention suggests a substantial and sustained change in the children’s behavioral development.

In a separate, much larger study called PACT, we used a similar intervention with preschoolers already diagnosed with autism. It produced similar long-lasting improvements that were still evident six years after the end of the intervention.

Autism Speaks: Please describe how your team uses video to teach these skills.

Dr. Green: The therapist videotapes the parent and child interacting at home, at play and during other everyday activities. He or she then reviews the video for interactions to discuss with the parent at the next home visit. Over the course of up to 12 sessions, the therapist’s feedback progresses from teaching “watching and waiting,” to inferring the baby’s intention, fostering sensitivity chains, sharing emotions and communication.

Autism Speaks: What’s the advantage of video feedback versus a therapist simply observing how the parent and baby interact and providing immediate feedback?

Dr. Green: Research suggests that video feedback is a highly effective method of learning – with better results than direct instruction from a trainer or even watching and modelling an expert. Because video feedback has caregivers watching their own behavior, I think it encourages them to reflect on how they respond in everyday situations.

Autism Speaks: What do you consider the study’s most promising insight or finding?

Dr. Green: I think the most promising insight is that babies showing early symptoms of autism benefit from the same kind of social enrichment and quality interactions as do so-called neurotypical babies. In this regard, autistic development doesn’t proceed through much different rules to neurotypical development. It represents an individual difference but is subject to similar influences. Since we see autism as a variation on normal development, the intervention does not have to be starkly different from that for children with other kinds of developmental differences.

I think this is an important insight into how we can support social communication and development. The one exception to this is in the development of spoken language. Our intervention did not seem to improve the development of language in the way we expected. We don’t know why at this time, but we want understand this better.

Autism Speaks: Are there any changes you’re making to the intervention based on your study results? Please describe.

Dr. Green: The results suggest we should add a booster element, or refresher parent training, when the infants are around two years of age. This is the point where we saw the effect on the parents’ style of interaction begin to fall off. Adding even a short refresher session might maintain the benefits for significantly longer.

Autism Speaks: What’s next in terms of making this intervention widely available to parents?

Dr. Green: We need to take several additional steps before making this intervention widely available. First, we need larger trials – with more babies and parents – to make sure that the benefits we found are real. We are currently collaborating on such a trial in Australia. In it, the video training will take place slightly later, beginning at 13 months of age, and enroll children from the general community who have shown symptoms of concern.

After that, we want to do another, much-larger trial with infants in high-risk families. That will enable to see any definitive long-term effects of very early intervention on development and autism diagnosis. As I mentioned earlier, we think a trial like this would need to include over 200 babies to give clear evidence that the program is worthwhile and that it’s appropriate to intervene in infancy, long before diagnosis.

Autism Speaks: Meanwhile, how can parents learn more and/or find therapists who offer this kind of training?