Autism Speaks renews call for significant increase in funding for research and services to support the 2.3% of U.S. children with autism spectrum disorder

CDC estimate on autism prevalence increases to 1 in 44 children in the U.S. 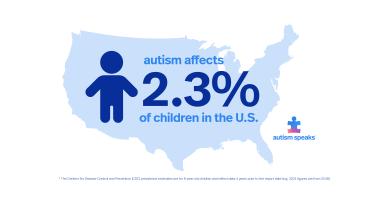 PRINCETON – The Centers for Disease Control and Prevention (CDC) released today its biennial update of autism’s estimated prevalence among the nation’s children, based on the active surveillance across 11 monitoring sites in the United States for 8-year-old and 4-year-old children in 2018. The new report shows an increase in prevalence with 1 in 44 children or about 2.3% of 8-year-old children diagnosed with autism spectrum disorder in 2018.

This 24% increase in prevalence shows progress in awareness and advocacy for early identification and diagnosis but also reiterates the need for a significant increase in funding for autism research and services to be provided throughout the lifespan. 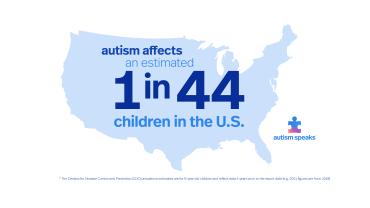 With these findings, Autism Speaks renews its call for Congress and executive branch agencies to make additional investments in research and services that address critical community issues, such as racial and ethnic disparities, co-occurring medical conditions, and challenges across the lifespan. The overall investment in autism research falls behind the recommendations of the Interagency Autism Coordinating Committee (IACC), the advisory committee that coordinates federal efforts around autism. This shortfall must be addressed, with new resources going to the CDC and its Autism Developmental Disability Monitoring (ADDM) network, the National Institutes of Health, and the Health Resources and Services Administration, among others.

“With 2.3% of children in the U.S. diagnosed with autism, this report validates our rallying cry for a significant increase in funding to provide more support and ensure that they are provided the services needed from early intervention to adult transition and throughout the entire lifespan,” said Autism Speaks President and Chief Executive Officer Keith Wargo. “Our continued efforts in advocacy and research are aimed to create a world where all people with autism can reach their full potential.”

To learn more about Autism Speaks, visit autismspeaks.org. To join the conversation, find @autismspeaks on Facebook, Instagram and LinkedIn. For personalized support and questions, contact the Autism Response Team at 1-888-AUTISM2, en Español at 1-888-772-9050 or by email at help@autismspeaks.org.

Autism, or autism spectrum disorder, refers to a broad range of conditions characterized by challenges with social skills, repetitive behaviors, speech and nonverbal communication. We know that there is not one autism but many subtypes, and each person with autism can have unique strengths and challenges. A combination of genetic and environmental factors influences the development of autism, and autism often is accompanied by medical issues such as GI disorders, seizures and sleep disturbances. Autism affects an estimated 1 in 44 children.

Autism Speaks is dedicated to promoting solutions, across the spectrum and throughout the life span, for the needs of individuals with autism and their families. We do this through advocacy and support; increasing understanding and acceptance of people with autism spectrum disorder; and advancing research into causes and better interventions for autism spectrum disorder and related conditions. To find resources, join an event or make a donation, go to www.autismspeaks.org. Learn more by following @autismspeaks on Facebook, Twitter, Instagram and LinkedIn.