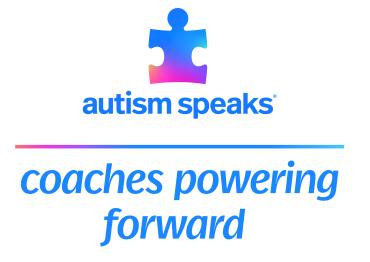 NEW YORK (March 4, 2022) – NCAA Basketball coaches, teams and fans across the country will display their support for the autism community by wearing Autism Speaks puzzle-piece pins or face masks at games during the weekend of March 4-6. The Coaches Powering Forward for Autism Speaks campaign is an annual effort to bring college basketball coaches, teams, schools, broadcasters and fans together to raise autism awareness and help create a world where all people with autism can reach their full potential.

Autism Speaks Coaches Powering Forward was created in 2014 after two NCAA coaches embarked on a mission to raise awareness of autism. Inspired by their children who were diagnosed with autism, they made a simple request to fellow coaches: Wear the Autism Speaks blue puzzle piece pin during the televised February weekend games. In an overwhelming response, more than 82 NCAA coaches and broadcasters took to the sidelines and airwaves throughout the weekend wearing the puzzle pin that first year.

This year, Coach Pat Skerry of the Towson Tigers men’s basketball team is joined by Coach Colleen Mullen of the UAlbany Great Danes women’s basketball team to lead Coaches Powering Forward. The coaches share the experiences of having a child on the spectrum and were united through the Autism Speaks community. With Coach Mullen’s involvement, Autism Speaks will further expand its Coaches Powering Forward campaign to include women’s teams, whose coaches and players will don the Autism Speaks blue puzzle pin during the weekend games.

“I’m thrilled to join Coach Skerry and be a part of a cause that holds a great deal of personal significance for me,” said Coach Mullen. “When my wife and I first learned that our twin sons had autism, Autism Speaks helped guide my family to the services and support we needed. We hope that Coaches Powering Forward will not only help increase understanding and acceptance, but also drive other families to access the wide range of resources that Autism Speaks offers.”

“We couldn’t be more excited to continue Coaches Powering Forward this year, especially as the last few years have highlighted the resilience of the autism community,” said Coach Skerry. “As a father of a young man on the spectrum, I’m grateful that we can unite the college basketball community with the goal of creating a world where all people with autism feel supported, understood and accepted. Together, we have the ability to help them unlock their potential and achieve their dreams.”

Fans can join the conversation on social media by tagging @autismspeaks and using #autismhoops during Coaches Powering Forward weekend and throughout the season. Teams and fans are also encouraged to show their support and commitment to autism awareness by wearing their pins year-round. Autism Speaks is committed to enhancing lives today and accelerating a spectrum of solutions for tomorrow for people with autism, and 85 cents of every dollar supports research, advocacy, programs and services.

To learn more about Autism Speaks and how you can support the mission, visit www.AutismSpeaks.org.

Autism, or autism spectrum disorder, refers to a broad range of conditions characterized by challenges with social skills, repetitive behaviors, speech and nonverbal communication. We know that there is not one autism but many subtypes, and each person with autism can have unique strengths and challenges. A combination of genetic and environmental factors influences the development of autism, and autism often is accompanied by medical issues such as GI disorders, seizures and sleep disturbances. Autism affects an estimated 1 in 44 children.

Autism Speaks is dedicated to promoting solutions, across the spectrum and throughout the life span, for the needs of individuals with autism and their families. We do this through advocacy and support; increasing understanding and acceptance of people with autism spectrum disorder; and advancing research into causes and better interventions for autism spectrum disorder and related conditions. To find resources, join an event or make a donation, go to www.AutismSpeaks.org. Learn more by following @AutismSpeaks on Facebook, Twitter, Instagram and LinkedIn.