What's the connection between autism and depression? 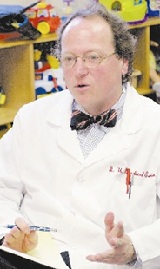 This is an important question. Mood disorders – including depression – do appear to be more common in those with developmental disabilities than in the general population.

However, diagnosing depression in those with autism represents a challenge that dates back to Leo Kanner’s original description of “infantile autism,” in 1943.

Kanner described a disturbance of “affective contact” in those with autism. Clinicians use the term “affect” to describe how someone’s emotional state appears to others. In other words, does the person look depressed or anxious? This can be different from “mood.” Mood refers to how someone actually feels inside.

Affect and mood are not always aligned. For example, someone’s expression may appear flat and register little reaction. However, that person may say that he or she feels fine. Clinicians refer to this as an “incongruence of affect and mood.”

Many individuals with autism spectrum disorders (ASD) show little facial emotion. This does not necessarily mean they’re depressed! In other words, their affect doesn’t necessarily match how they feel.

However it does make it more difficult to recognize depression in someone with autism. In addition, many individuals with ASD have limited or no speech. So they may not be able to tell us how they feel.

As you can imagine, this makes it challenging to accurately diagnose depression in those with ASD. We can ask about other symptoms that sometimes flag depression. These include changes in appetite or sleep – either increased or decreased. There may be a telltale drop in energy or lost ability to take pleasure in activities that had been enjoyable. This may come with an overall decrease in interests and motivation.

We can measure changes in weight and hours of sleep. Still, it’s difficult to confidently diagnose depression in those who may not be able to convey how they feel in words or appearance.

Another challenge in diagnosing depression in someone with autism is the overlap in symptoms. The symptoms of depression include a flat or depressed affect (facial expression), reduced appetite, sleep disturbance, low energy, reduced motivation, social withdrawal and reduced desire to communicate with others. Clearly, many of these same symptoms can stem from autism rather than depression.

When discussing the diagnosis and treatment of depression, it’s important to address the possibility of suicidal tendencies. In medical school, psychiatrists learn to assess for risk of suicide in every patient we evaluate for depression. This also applies to the assessment of individuals with ASD.

In a recent study published in the journal Research in Autism Spectrum Disorders, Angela Gorman and colleagues identified a number of risk factors associated with thinking about suicide and suicide attempts in children with ASD. (The study was supported, in part, by a grant from Autism Speaks.)

Through parent interviews, the researchers inquired about 791 children with autism, 186 typically developing children and 35 non-autistic children with diagnosed depression.

The percentage of children rated by their parents as “sometimes” to “very often” contemplating or attempting suicide was 28 times greater for those with autism than those with typical development. It was 3 times less among those with autism than among the non-autistic children who had depression. Depression was also the strongest single predictor of suicidal thoughts or attempts among the children with autism. Fortunately suicidal tendencies were uncommon among children under age 10. (Editor's note: Read "Eight Critical Measures to Counter Suicide," a blog post by Autism Speaks Board Member Sallie Bernard.)

These findings underscore how important it is for clinicians to assess the potential for suicide whenever evaluating adolescents or adults with ASD. Yes, we are challenged in making an accurate diagnosis of depression and suicide risks in individuals with ASD. We need to use all the information available to us for this purpose. This should include direct interaction with and observation of our patients. We need to talk with family members, teachers, job coaches, group home staff and so on.

The Urgent Need for Further Research and Clinical Guidance

We urgently need more research to develop better tools and techniques for diagnosing mood and anxiety disorders in individuals with ASD. This is particularly important for those who have significant communication difficulties. The use of augmentative and alternative communication devices may help.

Moreover, we critically need research that advances the development of effective medications and behavioral treatments for depression with ASD. To date, we don’t have a single published systematic clinical trial of an antidepressant medication for the treatment of depression in individuals with autism. Very likely, the challenge of accurately diagnosing depression in persons with ASD have contributed to this lack of progress. We must redouble our efforts in this critical field of care.