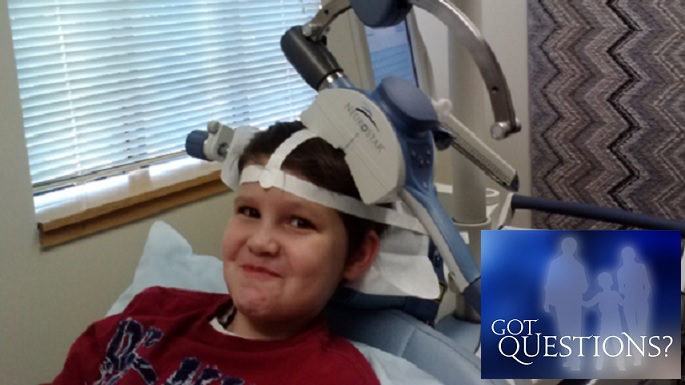 This week’s “Got Questions?” answer is by neuroscientist Lindsay Oberman, director of the Neuroplasticity and Autism Spectrum Disorder Program at Brown University’s Bradley Hospital, in East Providence, Rhode Island. Dr. Oberman is a pioneer in the use of transcranial magnetic stimulation (TMS) in the study of brain plasticity in people with autism spectrum disorder. Brain plasticity refers to the brain’s remarkable ability to modify its own structure and function.

Switched On, a new memoir by John Elder Robison, has greatly increased interest in transcranial magnetic stimulation (TMS) as an experimental treatment for autism. We’ve asked a leading expert to weigh in on whether there’s enough science behind TMS to recommend its use outside of research studies.

For readers who are not familiar, transcranial magnetic stimulation, or TMS, is a noninvasive procedure that uses electromagnetic fields to stimulate nerve cells, or neurons, in the brain. TMS can be used either to study or to treat neurological and mental health conditions.

When a single session of TMS is applied, researchers can observe the response to the stimulation and use that information to make predictions about how the brain functions. In this way, we use TMS to study the brain. These single session studies are not intended to be therapeutic.

Alternatively, when TMS is applied in repetitive stimulations over several sessions we refer to this as “repetitive TMS,” or rTMS. This technique has the ability to change the response of the brain for several weeks to months after the series of sessions.

By analogy, it’s like asking someone who isn’t a musician to play a song on a piano by showing him or her some sheet music. If you did it once, that may be a way to study a person’s natural ability. But if you did this every day for six weeks (the typical schedule for therapeutic rTMS), the person might learn to play the song on the piano.

Two decades of TMS research
For more than 20 years, researchers have been studying TMS as a potential therapy for a number of neurological and psychiatric conditions.

Currently the U.S. Food and Drug Administration (FDA) has cleared the use of TMS for the treatment of depression in adults who haven’t been helped by medication. FDA clearance is an important indicator that a treatment can help some patients – as demonstrated in carefully conducted clinical trials.

A growing body of research suggests that TMS can likewise help relieve the symptoms of schizophrenia and improve movement rehabilitation after a stroke. However, it doesn’t yet have FDA clearance for these uses.

TMS for the treatment of autism: Still in its infancy
By comparison, research on TMS as a treatment for autism spectrum disorder (ASD) remains in its infancy. A search on PubMed, for example, turns up 42 journal articles on TMS and autism. But many are either theoretical or review articles or single session research studies. Only 13 of these papers represent clinical trials, and only one was a placebo-controlled trial. (Including a comparison to a placebo, or sham treatment, is important in a study to distinguish true benefits from the effect of expectations.)

Some of these clinical studies have suggested that TMS can help relieve symptoms such as irritability and repetitive behaviors and improve autism-related disabilities in areas such as eye-hand coordination and social skills.

However, for the most part, these clinical studies have involved very small numbers of participants ranging from one to 27 participants. Taken together, all 13 studies involved fewer than 200 participants.

Yet another limitation of our early research is that we’ve focused primarily on certain subgroups such as adult men with ASD but without either intellectual disability or epilepsy (which commonly co-occurs with autism). We’ve excluded people with epilepsy for safety reasons, and most of the early work was in adults. We’re just starting to study TMS with children.

Currently, I know of three ongoing clinical trials using TMS as a treatment for ASD. These include a Canadian study looking for improvements in executive functioning with an expected enrollment of 60 adolescents and young adults with ASD. A French study is looking at possible changes in social cognition and aims to enroll around 50 adults with ASD. And a study in Israel is looking at changes in social interaction with an expected enrollment of 20 children and adolescents with ASD and intellectual disability.

Caution needed
Because of all these limitations, I caution against drawing conclusions from the preliminary results of the TMS studies that I and others have conducted. I know it’s easy to get overly optimistic given the media coverage and web posts about the remarkable responses some people with autism have reported after participating in a TMS study. Sometimes these reports make TMS sound like “the answer” to debilitating autism symptoms.

Questions needing answers
As a researcher, I want to see a number of questions answered before TMS becomes a treatment option for autism outside of a careful research study:

1. What is the appropriate dose?
In other words, how long should the sessions be? How many sessions? How often? At what intensity? Like a drug study, we have to understand how much TMS is needed to lead to behavioral changes and still be safe and tolerable. Does the dose need to be scaled up or down depending on the age of the individual or other co-occurring neurological or mental conditions?

2. Where in the brain should the stimulation be applied and with what frequency?

3. What behaviors are we hoping to improve?
TMS applied to a single part of the brain isn’t likely to improve all the common symptoms of autism. But it may improve specific symptoms. Currently, it’s not clear which symptoms may be more or less responsive to TMS.

4. Who may be a good candidate for TMS treatment for autism?
To date, studies have largely focused on verbal adults. But TMS may have a greater impact on a younger brain. We need to conduct larger studies that enroll both verbal and nonverbal individuals and children and adults in order to begin identifying the subgroups of people who are most likely to respond to TMS.

6. Do we have clear evidence of benefit from TMS versus a placebo, or dummy treatment?
Only one published study has included a blinded sham control condition. That’s where neither the researchers nor the participant know who’s getting the actual treatment and who’s getting the sham treatment until after the study is over. Therefore, it’s currently unclear how much of the effect reported in the other twelve published studies were due to a placebo effect.

8. Is it ethical to start offering TMS outside of research studies as an “off label” (not FDA-cleared) autism treatment?
Insurance is unlikely to cover a treatment that’s not yet FDA cleared. But countless individuals and families may be desperate for anything that may relieve their or their loved one’s symptoms. I don’t want to see these people spend tens of thousands of dollars for a treatment that we don’t yet know will help – and might make symptoms worse.

Cautious optimism
Despite all the above cautions, I don’t want to give the impression that I don’t see promise for TMS as a future treatment in ASD. Quite the opposite, I continue to focus my research career in this direction.

So while I can’t currently support the use of TMS as a treatment for ASD outside of a research setting, I can promise you that my colleagues and I will continue to wholeheartedly pursue research to answer the questions we’ve raised. Hopefully the end result will be a safe and effective new treatment option for individuals with ASD.

In closing, I want to welcome anyone who has questions or interest in participating in our studies to contact me and my team at loberman@lifespan.org. We would be happy to answer your questions.