Perspective on new findings on regression in autism

Pediatrician and "baby sibs" researcher Lonnie Zwaigenbaum answers questions about the surprising results of recent studies into regression, or loss of skills, in autism 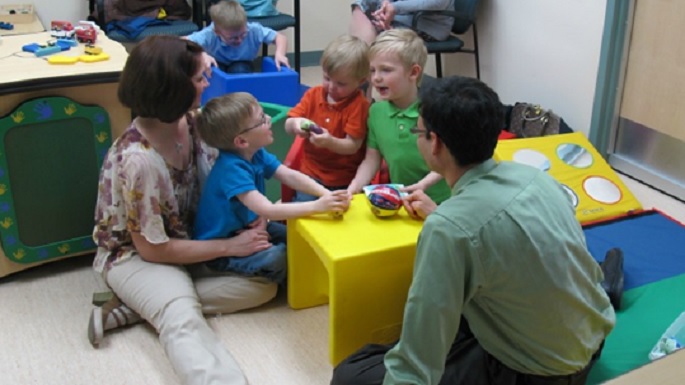 Developmental pediatrician and autism researcher Lonnie Zwaigenbaum recently helped organize a day-long international workshop on regression in autism, sponsored by the National Institute of Mental Health, in Bethesda, Maryland. Regression involves the loss of developmental skills – most noticeably language and social engagement – in some children with autism.

Dr. Zwaigenbaum co-directs the Autism Speaks Autism Treatment Network site at the University of Alberta’s Glenrose Rehabilitation Hospital, in Edmonton, and his research team is part of the Autism Speaks Baby Siblings Research Consortium. Because autism tends to run in families, “baby sibs” researchers track the development of younger siblings of children who have the disorder.

We reached out to Dr. Zwaigenbaum to answer some of the questions raised by recent research into autistic regression.

Q: How has our understanding of regression advanced with recent studies tracking the development of the infant siblings (“baby sibs”) of children who have autism?

I think baby sibs research has provided an opportunity for researchers worldwide to work alongside parents and follow very young children at risk for autism over time. As part of this, we’ve had a chance to see the earliest features of regression as they unfold.

This is important because when we ask the parents of children with autism to reflect back to their first concerns, upwards of 20 to 30 percent recall a period when their children lost social and communication skills in the second year of life.

Our baby sibs research has raised the question of whether these instances of obvious skill loss – often including the loss of language – are just the tip of iceberg. We are starting to see evidence that regression may actually be part of a continuum of atypical development that begins earlier and more subtly in infancy.

Our research is not only confirming what parents tell us, it’s also showing an earlier, more gradual onset of autism symptoms. It’s becoming clear that some kids are losing ground in areas of development as early as 6 months to 1 year. Many have lost social skills – such as directing eye contact – that they clearly had at 3 or 4 months.

It may be more difficult for parents and doctors to see regression that occurs before one year of age if the children aren’t yet speaking, especially if the changes are subtle. So another game changer from baby-sibs work is that we can now use technology to look very closely at things like where babies are directing their attention and how that is changing over time. For instance, this research can detect when babies start showing less attention to peoples’ eyes. In doing so, we have documented the first signs of regression at 6 months or even earlier.

So again, by tracking early development more closely and systematically, we’re seeing that regression may start far earlier and progress more gradually than once thought.

Q: Is there evidence that regression may be a universal aspect of autism rather than one subtype of autism?

We have to be cautious about saying that anything is universal in autism. Autism involves so much diversity. Rather, I’d say that regression may be much more common than we used to think.

This may be especially true if we broaden our definition of regression beyond loss of language and look at how kids are losing skills before they speak. When we track their communication skills and abilities over time, starting in infancy, we see evidence that they’re doing certain things less. There’s a larger proportion of kids where we see evidence that they’re not as socially engaged at 9 or 12 months as they were at 6 months.

And there are some babies who are not progressing at the same pace as they were earlier, and as a result, they’re starting to fall behind skills.

As a result of all these things, I think we may be getting away from the notion that regression is in just a minority of children with autism. As we start to think about loss of skills more broadly, it may be that regression affects most kids with autism in some way.

Q: What might this mean for early diagnosis and intervention?

One thing that research on younger siblings is showing us about early detection of autism is that it’s not just about behavioral signs at one point in time. Rather, it’s also important to track how kids are developing over time. This is especially important for children at high risk for autism.

So for the pediatrician or parent at a baby’s checkup, it’s not just about looking for red flag behaviors. It’s also about discussing what’s happening from one appointment to the next. Is the child’s rate of development slowing?

Eventually, there may even be a place in the clinic for some of the technology we use to study the early development of social engagement – things like eye tracking technology. Perhaps even brain imaging will one day have a role in helping to identify infants at risk of autism.

This kind of pre-symptomatic detection might involve seeing that the way a child is taking in information about the world is different – even if they don’t have overt impairments that indicate autism.

We’ve already recognized the importance of identifying early indicators of autism risk and are moving forward with early interventions that can help young children even before a diagnosis of autism can be made. Sally Rogers’ Infant Start model is a great example of this, as is our group’s Social ABCs model, among others.

Q: At the recent scientific workshop on regression, several researchers presented evidence that regression may be associated with overaggressive pruning of brain connections during early development. How might greater understanding of this advance how we help someone with autism?

The more we know about the brain processes and mechanisms behind autism, the more we can be strategic in targeting interventions. Currently, we support people with autism by enhancing their learning environment and helping them develop functional skills.

As we move our interventions to younger and younger age groups, we may come to the point where we’re using direct brain measures to look at responses to therapy so we can hone our approach and improve how we’re addressing the individual’s needs.

If we can see more detail in the brain, it may also give us ways to look for risk markers and identify infants in need of services earlier and earlier. Of course, we need developmentally appropriate intervention strategies to offer these babies. Then again, who would have thought a few years ago that we’d be starting autism interventions before a child’s first birthday, and now we’re doing just that with good evidence of benefit.

Q: What important differences or similarities might there be between the brain biology underlying the subtle regression being detected in babies and the more obvious regression seen in some toddlers?

We’re just now learning what regression looks like across a continuum of age and behaviors. At the same time, we’re just starting to see what the biology of brain development looks across these same age groups. So there’s still a lot of work to be done in parsing out the brain-behavior connections. We don’t know at this point whether regression in autism is a continuum or we’re looking at different process in infancy versus what we see later.

Q: What else might regression teach us about autism and how to help people affected by it?

I am very interested in Annette Karmiloff-Smith’s observation that developmental regression is not unique to autism. Annette identified parallels between autism and other developmental conditions. This observation gives us the opportunity to learn from other fields.

Another interesting notion is that, if certain children are born with a biological susceptibility to autism that involves regression after birth, we might be able to identify these children based on brain biology and intervene earlier to strengthen their development.

I think this is a very hopeful perspective on autism: that many infants who have a vulnerability to autism are also born with many strengths and the potential to develop their abilities and function with the right support. It might be that by starting intervention early and earlier, we can reduce or prevent the developmental losses that lead to the onset of symptoms that we observe later in the first or second year of life.

Q: What other kinds of research would you like to see on regression in autism?

I’d like to see us advancing our understanding of the brain biology of regression in autism. I’d like us to advance our understanding of how regression looks at different stages of life. Now that we’re seeing signs before one year, what about before 6 months? What about earlier? It was so important to bring together scientists from many different fields at the recent NIMH meeting – important for sparking thought and discussion on how we can discover the developmental origins of autism. I’m very encouraged.

Q. What can research tell us about the influence of environmental factors such as inflammation on regression or the onset of autism symptoms?

I think we need to continue to study both genetic and environmental factors and how they influence early patterns of development in autism, including skill loss. What we are learning from prospective studies, as well as viewing early home videos, is that in most cases, changes in development and loss of specific skills are occurring over an extended period of time. So we should likely be focusing on processes that influence brain development over time.