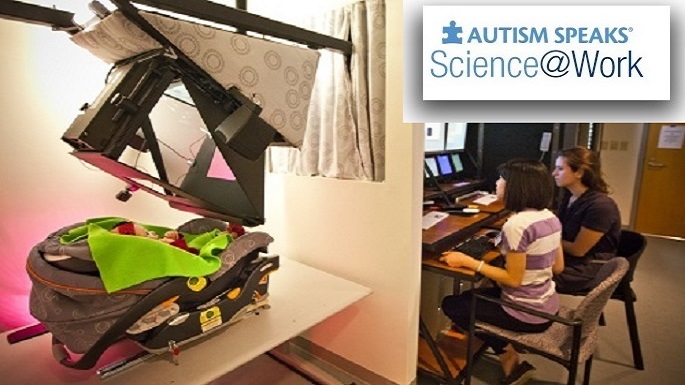 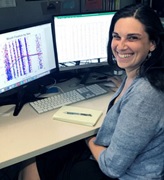 By clinical psychology doctoral candidate Rebecca Burger-Caplan, a member of the 2014 class of Autism Speaks Weatherstone Predoctoral Fellows. She continues the research launched by her Weatherstone fellowship at the Marcus Autism Center of Children’s Healthcare of Atlanta and Emory University School of Medicine, in Atlanta. Funded by the Stavros Niarchos Foundation, the fellowship was established in 2008 in memory of Sir Dennis Weatherstone, the former chairman and CEO of J.P. Morgan . The program honors his family’s enduring commitment to the education of promising scientists beginning careers in autism research.

Thanks for this opportunity to describe the research I was privileged to carry out during my Autism Speaks Weatherstone Predoctoral Fellowship. Under the guidance of my research mentors, psychologist Ami Klin and neuroscientist Warren Jones, the fellowship allowed me to explore whether differences in early development offer some protection from autism in girls.

This is important because it may help us improve and personalize how we support early development and design early interventions, based on what we observe happening in typical babies as they learn about the social world.

We have long known that far more boys than girls are diagnosed with autism (1 in 42 versus 1 in 189).  Research suggests that this difference at least partially involves the genes that predispose to autism. In addition, we believe there may be crucial differences in the way that all boys and girls develop – on or off the spectrum – and that these differences can help us understand what protects girls from the condition.

The goal of my Weatherstone project was to deepen our understanding of the differences in how typically developing boys and girls learn language and in how they seek out and interact with the social world around them.

We built on prior research, by Dr. Klin and Dr. Jones, that explored how social-visual engagement (the way a baby is watching, seeking out, and interacting with social information) develops across infancy. In particular, the team explored where babies look when they view videos of people speaking and how this might relate to their social development.

That research found that, between ages 2 and 6 months, boys who go on to be diagnosed with autism show declining visual attention to the eyes of other people. By contrast, typically developing babies show a steady or increasing amount of visual attention to people’s eyes during this same period.

This analysis involved only boys who developed autism because just two of the girls in the study developed the condition. This was too few girls to draw meaningful conclusions – a common problem in autism research.

So in my Weatherstone project, we analyzed visual attention differences between typically developing boys and girls. We also focused on a longer period of development – the first two years of life.

We use sophisticated cameras and analytical technology to closely track where babies are looking when we show them videos of adults speaking to them in ways a caregiver would talk to a baby. (See image above) These differences in “looking patterns” are subtle and not obvious to the naked eye.

Speech and attention to the mouths of speakers

We already knew – based on research by others – that, in general, babies show a spike in attention to the mouths of talking people around the time that infants begin to speak their first words. Previous research also showed that girls tend to start talking and expanding their vocabulary earlier than boys – though this generally evens out by the time children enter preschool.

In my research, we looked more closely at visual attention patterns of the typically developing baby girls and boys who had participated in our team’s earlier studies. We found that the infant girls increased the amount of time spent looking at mouths early in the second year of life, on average between 13 and 15 months of age. By contrast, the typically developing boys increased their mouth-looking, on average, between 15 and 18 months of age.

We found that the baby girls’ earlier mouth-looking aligned with their earlier growth in expressive (talking) and receptive (understanding) communication skills.

This supports the idea that looking at a speaker’s mouth is closely linked with language development. Our study went beyond previous research on infants to suggest that these sex differences in mouth-looking patterns extend into toddlerhood when vocabulary really takes off.

Delving deeper, our statistical analysis showed that increased visual attention to the mouth occurs right before a surge in word learning in the middle of the second year of life. And the amount of time that infants spend looking at the mouth peaks earlier among typically developing girls than boys.

After that peak in mouth looking, the amount of time spent looking at mouths decreases and the typically developing toddlers begin to focus more on people’s eyes – as they tended to do in early infancy.

It may be that once mouth looking has “done its job” to launch language development, it’s not so important to continued vocabulary building. So once a child begins speaking in earnest, the primary focus may return to a speaker’s eyes, where so much social information is communicated.

We see hints of this progression in our analysis of where babies and toddlers look when viewing a video of someone talking. That this process is happening earlier for girls than boys may help us answer important questions about whether there’s something “protective” in the early development of girls that supports typical development over autism.

Is mouth-looking crucial to becoming verbal?

This leaves us with two hypotheses that we are now examining. The first is that a baby’s social-visual engagement (focus on mouths versus eyes versus elsewhere) shows us what they find interesting in a given stage of development, but it’s not crucial to language learning.

By contrast, focusing on the mouth may be much more than just interesting to babies learning language. It may be necessary for normal language development. In other words, later attention to speaker’s mouths may delay the beginning of language development in boys.

Answering these questions may help us understand why girls acquire language earlier than boys do and might also help us discover what gets in the way of language learning for many children who develop autism.

Following this logic, if girls tend to hit their social and communication milestones earlier than boys, this head start might support more-typical development – even in the face of other risk factors for autism.

We are going to test this possibility by looking at babies’ social-visual engagement and the development of other important social and communication skills during the first few years of life.

If we find that girls are wired to develop many communication skills earlier than boys, it would follow that girls are then able to engage in more social learning from early in infancy.

Along with my advisors, I am excited to continue this work with the hope of deepening our understanding of how social-communicative skills unfold early in life and when and how this process differs among those who develop autism.

The more we can learn about these developmental milestones in children without autism, the greater our chances of applying key lessons to how we help children with autism and their families.

I am grateful to Autism Speaks for funding this research and for investing in early-career researchers such as myself.

This work is made possible by the generosity and passion of our volunteers and donors.

Podcast
Adulting on the Spectrum: Autistic startups, gaming and learning to take the first step

Expert Opinion
Autism and learning to respond to one’s name
Tool Kit Excerpt
Autism and Social Skills Development
We're Here to Help Chat with Us
Autism Response Team Chat
There are no available agents at the moment.