Our 17-year-old son has a diagnosis of autism and developmental delay. Lately, he’s been chewing on his shirt collars as well as chewing and sometimes swallowing things like pen caps, erasers and all sorts of paper. I also find objects around the house with teeth marks on them. Why is this happening?

This week’s “Food for Thought” post is by occupational therapist Moira Pena, of Toronto’s Holland Bloorview Kids Rehabilitation Hospital. The hospital is one of 14 centers in the Autism Speaks Autism Treatment Network (ATN).

Thank you for your question. Your family is far from alone in grappling with this problem. Chewing on things can be a form of repetitive behavior. The habit of swallowing non-food items is called pica. Both are very common among people who have autism.

I’m glad to share some of my insights as an occupational therapist who frequently works with families whose children have this dangerous tendency. But my overview and general strategies are no substitute for working with a behavioral and/or occupational therapist to develop a personalized intervention program for your son.

In addition to my tips below, I also highly recommend two Autism Speaks Autism Treatment Network guidebooks – Pica: A Guide for Parents and Pica: A Guide for Professionals. The ATN developed these tool kits as part of its role as the federal funded Autism Intervention Research Network for Physical Health (AIR-P). 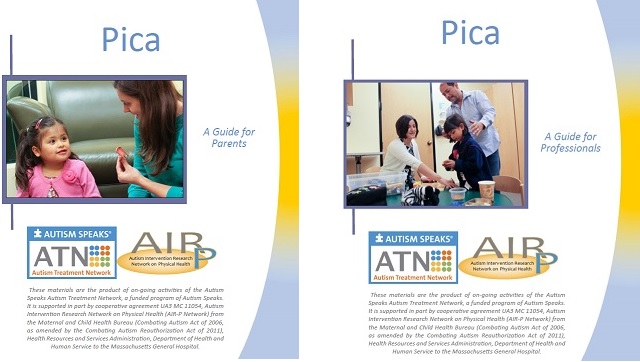 You can learn more about these Autism Speaks pica guides and download them free of charge.

On rare occasions, pica results from nutritional deficiencies. Pica can also produce serious medical problems such as lead poisoning. So it’s important for you to alert your son’s doctor to his pica and have him appropriately evaluated.

Any plan to address a problem behavior should begin with some detective work to figure out what’s driving it. So let’s consider your son’s new habit from three possible angles: emotional coping, sensory stimulation and attention seeking.

We know that anxiety is particularly common among children and teens who have autism. Some research suggests that around 40 percent of children with autism have an anxiety disorder.

In my practice, I often see children and teens who begin chewing non-food items because they are having trouble managing anxiety or frustration. Here are some issues to explore – ideally with the guidance of a child psychologist familiar with autism:

Does your son tends to chew on his shirt or other non-food items during situations or times of day he finds stressful? For example, when it's time to leave the house for school or to do his homework?

Does he seem upset when he starts chewing on things?

Have there have been changes in your son’s life that may have increased his overall anxiety or frustration levels?

Is it sensory stimulation?

Sensory issues are likewise very common among both children and adults on the autism spectrum. Sometimes this involves seeking out sensory experiences such as chewing on objects or clothing.

Signs that your son may be such a “sensory seeker” may include:

Another clue that his pica may be a sensory seeking would be your son’s mood when he engages in pica. Does he seem happy versus anxious when he’s chewing on his shirt? If so, the chewing may be something he does to calm himself.

Is it attention seeking?

I recall working with a family of a teen with autism who had started swallowing double AA batteries. After tracking the behavior, it became apparent that it occurred only on school day mornings. When I discussed this with the teen, he admitted that he swallowed batteries to avoid school and instead spend a day at the hospital with his parents close by his side.

While all of us engage in attention-seeking behavior, it’s important to remember that such behaviors can become a means of expressing needs for those who have trouble communicating – a core symptom of autism.

Now what? Strategies for curbing pica and inappropriate chewing

I am not a behavior therapist, but as an occupational therapist I’ve found the following general strategies helpful when working with families dealing with a child’s who is chewing on and/or swallowing inappropriate objects:

It helps to identify when your child is most likely to engage in chewing and/or swallowing objects. This gives you opportunities to prevent the behavior by redirection. 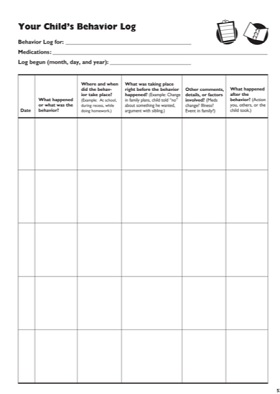 I encourage parents to keep a log, or diary, noting when and where it happens.

You can likewise use the log to note possible triggers – such as being told to get ready for school or when you notice he is tired.

Identifying patterns gives us opportunities to alter them for the better. For example, if your son tends to chew on his clothing or objects while he’s waiting to leave for school, see if you can prevent the behavior by engaging him with some favorite music or a game. Distraction can be a powerful tool for breaking unhelpful habits and other problem behaviors.

Does your son look for chewing objects in a particular place – say, a specific drawer? Lock it. Or better yet, move its contents somewhere out of sight and out of reach.

If you sense he starts chewing on things when bored, try livening up the environment. Turn on some background music or add some colorful posters or other visuals to a room. Conversely, some people on the autism spectrum get anxious if a room is “too busy.” If that seems to be the case with your soon, try creating a quieter, more visually subdued environment.

In fact, I find that small changes in the environment are often enough to draw attention and so reduce the impulse to engage in problem habits. Experiment to see what works for your child.

What if you suspect that your son’s behavior is a way of getting your attention? In the case I described above – with the teen swallowing batteries – we created a visual weekly schedule. He and his parents used it to schedule “together time” when they could block out time to play games, go on walks and do other activities together.

We also gave the boy and his parents a visual support – a picture of a traffic light – and showed him how to use it to communicate his needs to his parents in a constructive way. He learned to point to the red light when he felt the urge to find and swallow batteries. That was a signal for his parents to take a few minutes to engage him in one of the activities that he found calming. (Trampoline jumping was a favorite.)

Even better, the boy could point to the yellow light to signal that he was starting to feel unsettled. That gave his parents an earlier opportunity to steer him toward a favorite activity or other distraction.

An emerging option for getting ahead of problematic, stress-triggered behaviors involves using a wearable stress monitor that picks up on increased heartbeat and other physiological signs of stress. These range from free apps for mobile phones to devices that cost several hundred dollars. But getting a child or teen to wear one can be challenging.

It can also help to introduce a reward system for not engaging in the problem behavior. In working with the boy who was swallowing batteries, his parents began by giving him a daily reward. Then we began stretching out the positive reinforcement over increasingly longer periods of time.

Occupational therapists such as myself are trained to work with children on sensory processing issues – including sensory-related chewing and pica. Again, a personalized approach is best, but some general strategies might include the following:

For another sensory-rich oral experience: Invite him to drink thick semi-liquids through a straw. Options include applesauce, yogurt, milk shakes, icy smoothies, etc.

Sensory chewies are yet another option. Examples include chewy tubes, chew sticks and chewlery. Most of these tools are designed to be hard to swallow. Still, I recommend supervision when using them. Also, I recommend ordering them from manufacturers based in the U.S. or Canada, as some countries may use unsafe materials or unsanitary manufacturing methods.

Just as we all need a variety of foods in our daily diet, a “sensory seeker” may benefit from having two or three substantial “sensory meals” and as well as some “sensory snacks” throughout the day. We call this a “sensory diet.” It involves a variety sensory-based activities to balance mood and alertness.

Options can include making mud pies, finger painting, using modeling clay, jumping, running and so on. Find out what your child enjoys. Learn more about sensory diet activities here.

Research has shown that the occupational therapy technique of deep pressure input (proprioception) has a calming effect on the body and mind. If your son’s chewing is associated with anxiety, he may be calmed by engaging in some deep pressure activities throughout the day.

Over a few weeks, use your son’s behavioral log to see if any of strategies help decrease his tendency to chew on things.

Keep in mind that both behavioral and sensory issues may contribute to the behavior. So ideally, you’ll want to work with both a behavioral and an occupational therapist to develop a multidisciplinary approach to address his needs.

Thanks again for your question. Please let us know how you and your son are doing with a comment below or by emailing us again at gotquestions@autismspeaks.org.

Expert Opinion
The Pica-Autism Connection: Help & Perspective
We're Here to Help Chat with Us
Autism Response Team Chat
There are no available agents at the moment.