Why a mother-daughter running duo teamed up for Autism Speaks 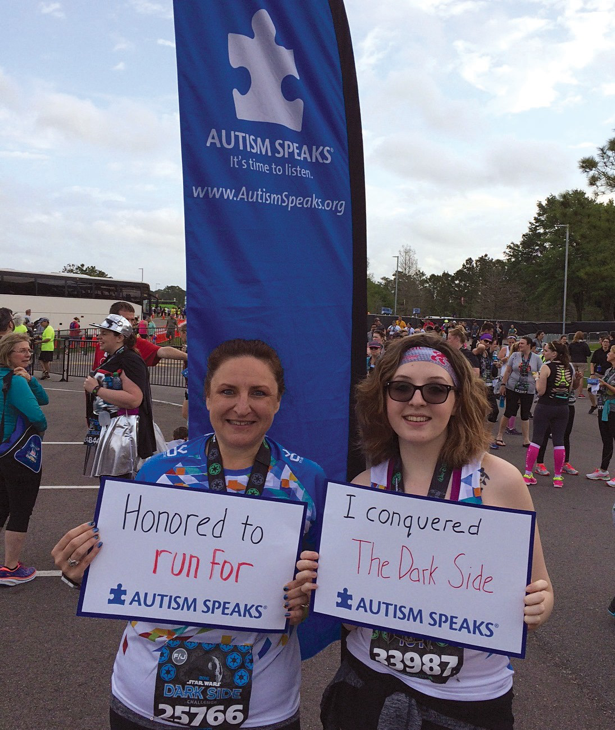 After searching for ways to stay active and being told by a friend about the different races through runDisney, Christel, Iowa Wesleyan ’88, decided to check out different race options online. She saw that through Disney you can run in support of various charities, including Autism Speaks. Christel and her daughter Samantha, Iowa Wesleyan ’14, decided to team up and run to celebrate their Sisterhood in Alpha Xi Delta and raise funds for Autism Speaks.

“We solicited friends and family for donations on our social media pages in order to raise money and run for Autism Speaks,” said Christel. Christel ran the Star Wars half marathon, and they both ran the Star Wars Dark Side runDisney 10K together.

To prepare for the big day, Samantha ran at night and took kickboxing  classes.  Christel  ran  an average  of 15 to 20 miles a week, utilized her Fitbit and Runkeeper app, and used the training schedule provided by Disney. They both signed up for the races six months in advance and began training 16 weeks before the race.

“Everyone has so many different groups and causes to support, so it was hard for me to ask people to give to another cause. Putting myself out there on social media and asking for donations was not easy for me,” Christel said. In the end, even though it was outside of her comfort zone, her fundraising efforts paid off.

While at Disney, they ran into some Alpha Xi Delta Sisters from the University of Florida and discovered that Alpha Xi Deltas who run the race meet up beforehand and take a photo wearing their letters. Christel also still gets together with her Beta Chapter Sisters; this past January a group of them ran a 5K at Disney World for fun!

Christel’s favorite memory from the race is finishing it  with her legacy. “The best part about the race was the fact that Samantha and I had completed  it together,” said Christel.

After the race, participants roamed the parks donning their medals and taking photos with the Disney characters. All in all, it was a fun day of running and the duo cannot wait to get back out there to continue to run and raise money for Autism Speaks!