There’s a Letter Waiting for You (if you want)

The privilege to live authentically out loud is not afforded to everyone, but I am thankful we are continuing to move towards more acceptance.

This guest blog post is by Brigid Rankowski, a disability advocate, author, circus performer, LGBTQ+ advocate, and Miss Mermaid Maine 2021. You can connect with her on her blog, Facebook and Instagram. 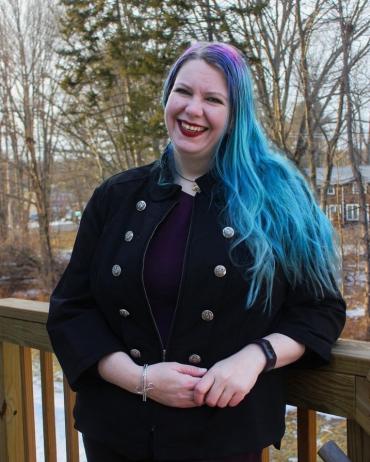 I grew up living in larger cities across the United States and these cities would always start to be decorated with rainbows when June came around. As a child, the basic knowledge of pride parades was a joy because I loved the spectacle, colors and parades as a whole. It would be many years until my education of what Pride month was about became fully informed, and even at 33, there are still new things I’m learning about the LGBTIAQ+ community on almost a daily basis. There are so many more layers to identities than what I could have ever seen passing by on the parade floats as a small child.

My first “girlfriend” lasted the length of the London Pride parade, in which we walked hand in hand shouting “Stonewall was a Riot.” I was 20 and had no real idea what Stonewall was, no idea who I was in the moment and was still unaware of the unlimited options for love existing in the world. At the time, and for several years after, I would still think of myself as straight or heterosexual. It wasn’t until multiple relationships later that I finally settled on “anything except heterosexual” as my default, but still more years until I found out there were words for who I am or the people who I fall in love with.

My college experience included the release of Katy Perry’s hit pop song “I Kissed a Girl.” At this time in media, there were still very visible images of how same-sex couples “look”, and it was so confusing to me. My mother never sat me down and talked about expectations of me getting married to a man or presuming I was straight. Add in the confusing messages of fake lesbian kissing being widely circulated everywhere we looked, it added some layers to myself that I didn’t have names for yet.

Pride month would come around every year and it made me feel anxious. One question would repeat in my head over and over: Do I have a right to celebrate or participate in any Pride activities when I don’t even know if I’m a member of the community?

This is a very common question posed by so many people for so many different personal reasons. We still have communities where it is not safe for a person to openly acknowledge being in a same-sex relationship or being transgender. I won’t scare you with the statistics because that’s not why I’m writing to you. I’m writing to you to let you know you belong just as you are, without having to prove it to anyone (including proving it to yourself.)

One of the greatest lessons I’ve learned from being disabled and queer is you should never have to worry if you are “enough” to be considered a member of a marginalized community. There isn’t a test you pass and only you know your own lived experiences. We can’t always tell by looking at someone if they are disabled, so why would anyone think they could tell if someone is gay by looking at them?

The layers of our being—how we identify and who we love—are some of the most personal parts of ourselves, so we need to be extra kind to those parts. Comparing our relationships to others doesn’t change who we are at our core.

An important thing I’ll add that many older adults who grew up in a different generation can attest to is we don’t stop growing into ourselves. We may be raised thinking we must have a certain type or relationship for any number of reasons, but love finds a way. Listening to stories of older adults who had to stay in the closet and pretend they were someone else for their safety or another’s safety is really heartbreaking. The privilege to live authentically out loud is not afforded to everyone, but I am thankful we are continuing to move towards more acceptance.

There are multiple As in the full LGBTIAQ+ acronym, and the first one stands for asexual, which is a demographic that gets too often overlooked even in the gay community. The second A stands for ally, which involves doing work to elevate other voices besides just our own.

Being an ally, in my opinion, should be used as a verb instead of a noun. This means a person should be working to ally themselves with other voices constantly instead of just calling themselves an ally and believing the work is done. There are often conversations about the place allies have in gay communities and I’m of the opinion that if people are actively working to make the world a better place for everyone, they should be included. Asking people to only come to Pride events if they identify as queer makes it difficult for the people who are questioning their identities, who aren’t safe to come out or who feel they may not be enough for the community.

This Pride month, even if you are not a member of the community, there are still lots of things you can do to celebrate in your own way. This includes:

Podcast
Adulting on the Spectrum: Being transgender and accepted, hyper fixations and VHS tapes

Blog
In our own words: what Pride Month means to me

Blog
Pride in Yourself