My Son’s First Summer Job: Will Work for Snacks 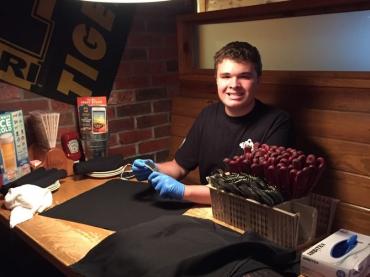 My summer jobs as a teenager weren’t what I had in mind for my long-term future. But they were a chance for me to make money while learning what it’s like to have a job. I also learned a lot about myself: strengths, weakness, likes and dislikes. We often see it as no big deal, a rite of passage for teenagers. But many teenagers with autism don’t have this opportunity. It may seem like a small thing, but as a parent of a child with a disability, my family is gifted with awe and appreciation for the little things that others take for granted. My son’s first summer job was definitely a milestone for our family to celebrate.

Blake was diagnosed with autism when he was 21 months old. Specialists said he would likely be non-verbal. As a pediatric speech-language pathologist and teacher of the deaf and hard-of-hearing, I worked with children with autism before having Blake. I understood his care needs. As a young child, he had the best therapists, programming and medical care available. We worked hard. He worked even harder. Then, he got older.

Preparing for life after high school began before he even got to middle school. They started talking to us about transitions in fifth grade. We learned about special needs trusts, vocational rehabilitation and transitional living options. My little boy became a teenager. When entering high school, we were expected to develop a transition plan for our son as a freshman. How many parents of typical children plan in detail what their child will do after graduation when they start high school? How many of their children are unable to tell them anything about what they would like to do? It’s scary and overwhelming.

Although we worked incredibly hard for more than a decade to get him ready for this next stage, we were faced once again with all the things he couldn’t do and will not experience that others will. I chose to focus on researching and figuring out what my son COULD do. Now 16 and entering his junior year of high school, Blake loves his family, school, swimming, his iPad, music and food! Blake is now verbal, he types beautifully with both hands, and he can multiply and divide fractions and decimals. Blake can read, even if comprehension is still challenging at times.

Blake is in a special program for people with autism in his high school that helps students figure out their goals and dreams for employment, living options, and recreation. We found out that Blake didn’t really understand the purpose of a job and that he wanted to live at home. We were encouraged to get proactive.

At a conference about employment for people with disabilities, I learned that it is much harder for people with disabilities to get jobs after high school if they haven’t had a paid job before they graduate. I realized that I wanted more for Blake than just to get a job after high school. I wanted for him to have a job that motivated and inspired him. I wanted him to find fulfillment in his job.  To get there, he would need experience on his resume to help lead him to his dream job. Finding him a summer job became our family’s summer goal.

Blake’s amazing high school teachers helped us sort out his likes and dislikes. We began there. He likes cooking, working on the computer, sitting to work, being inside and being around others. He does not care for custodial work, working outside, language-heavy work or lack of routine. Unfortunately, custodial or landscaping jobs are the most commonly available for people with disabilities, and those aren’t strengths for Blake. Some options we considered were sous chef, car detailer, data entry or computer work, or working with animals. A paying summer job tied to those options was hard to find.

So, I went to social media. I asked for referrals, hoping it would reach business owners or hiring managers in our community. Hiring Blake would help bring awareness to their workplace, and they would have a hard worker who is always positive and utterly honest. I was flooded with options and resources from my family and friends.

Luckily, our county has a wonderful employment program with active case management. Due to the type of waiver that Blake has, he can’t get instructional support on the job or use his personal assistants (PA) to help. But, we could access Boone County Family Resources home and life specialist. She helped Blake develop a resume, took him to interviews, found answers to questions, helped find him a job, took him to get his food handlers card, and helped modify the job with checklists and some training to staff. But she couldn’t help him by teaching him and staying there with him the whole time.

Blake was fortunate to have his first job at our local Texas Roadhouse. He couldn’t work in the kitchen by law, but this restaurant prep job rolling silverware and doing other tasks was a great stepping stone for a future restaurant job. They were open to having him, supported him, and were kind and patient with him. Co-workers naturally helped Blake like any other employee. It was true inclusion in action. Blake was happy about having a job and liked Texas Roadhouse, even though he wasn’t ecstatic about the work itself. When asked why he was working, Blake said it was “to buy snacks.” He would sometimes offer a list of the snacks that he intended to buy with the money he earned at his job. Anyone with a teenage boy would agree this is a fairly age-appropriate motivation to work.

When summer ended, so did Blake’s first summer job. Blake, our family and those working with him all learned a lot. Blake learned that you sometimes must do things for a long time at a job, that people are paid money for a job to spend on things they need or want, and that people need to have their uniforms clean and get themselves ready for their jobs. He learned to generalize his skills to a new environment. His case managers and specialists learned that the options for employment are confusing and overwhelming. I requested a list of the different programs for employment, and they created one to help other parents.

We learned or were reminded that Blake has a good memory for tasks, he follows directions well, he learns tasks quickly, he is a rule follower when the rule is concrete, he uses functional communication in the workplace, he is friendly and his co-workers like him. We learned that we need to do a better job of training co-workers about Blake at his next job, and that he struggles with staying on task when it is very repetitive. We discovered that while Blake needs routine, he needs it to vary to maintain his focus. He needs concrete completion expectations and encouragement to use full sentences. We also saw his difficulty with critical thinking and routine change. I learned to never stop fighting for him, to be creative and resourceful for him, and how proud of him I am for trying something new.

Blake plans to volunteer this school year and try a different work placement next summer. He will qualify for a different program next summer to try a new job with more supports up front. Trying and learning from summer jobs is how many of us learned what we did and didn’t want for our own futures. So many of our children with autism don’t get the chance to learn by doing. They are expected to pick a job based off what we know about them in unrelated situations. As adults, we often take work for granted. We complain about going to work and wish we didn’t have to. We have the physical and mental capability to have independence, make our own money and not have to rely on others for everything. It’s easy to forget that many people can’t work, or are not allowed to.

Many of our children plan to go from high school to employment. To help them have meaningful work, parents need to advocate for these experiences sooner, potential employers need to support our students by providing more opportunities and providers need to make this process clearer to families. Children like Blake need part-time and summer job experiences – they have less time to fail, learn and succeed so that they can find their dream job. This first job may not be his dream job, but it was a great one.

Lora and her husband, Miles, live with their sons Blake and Jackson in Columbia, Missouri.

Podcast
Adulting on the Spectrum: Talking to Temple Grandin