As my son with autism starts aging out of services, we will start taking chances

This is a post by Kimberlee Rutan McCafferty, mother to two sons on the autism spectrum and an Autism Family Partner at the Children’s Hospital of Philadelphia (CHOP). Kim is also the author of a blog about her two children with autism. She is the author of Raising Autism: Surviving the Early Years available on Amazon. 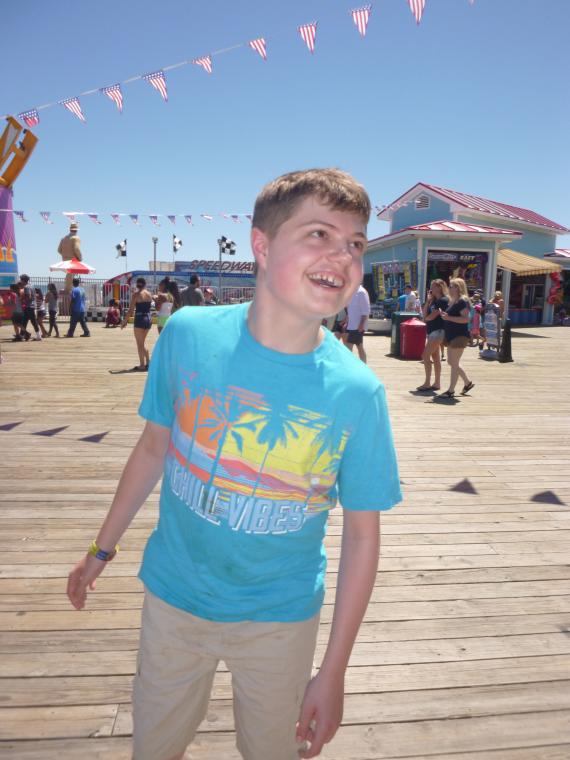 “He sounds like such a man,” my friend said after hearing some deep guttural stims over the phone as we caught up on each other’s lives and vented about our extra holiday pounds. “I know, he has the beginnings of a mustache” I replied, thinking happily that at least this would be my husband’s domain.

I have my limits when it comes to child care.

The truth is, I’ve been in a little bit of denial over my eldest son’s (who has severe autism, OCD and tics) impending manhood, in part because he is now bigger than I am, which can be problematic for a host of reasons.

The other reason is that each step closer to adulthood is one step closer to my not being here for him, and that’s just not a place I like to visit often.

Trust me, it’s not a pretty place.

Despite my reluctance to contemplate this the reality is that in five short years my son will be twenty-one, and will age out of his school entitlement.

I’m not sure who will be the most unhappy about this. I believe it will be a tie.

I’ve heard the post twenty-one autism world described as a “cliff,” but to tell you the truth I’ve seen my friends with older kids on the spectrum make it work for them, so to me, there’s still hope.

Of course the next five to seven years is when the “autism bubble” bursts, so not as sure we’ll be as successful.

The truth is I’ve got to start thinking about what the landscape of Justin’s life will look like, whether I want to or not. I’m hoping it includes a day program. It would be lovely if he worked a few hours a week or volunteered somewhere too. And one day, eventually, he will reside somewhere other than his mom, dad and his sibling.

His brother has made it clear he’s not taking him on full-time. And while I get that he’s eleven and that taking care of his severely autistic brother doesn’t sound as fun as time on Xbox, I’m pretty sure his opinion won’t change with maturity.

Call it a mother’s instinct.

Someday, Justin will live in some type of group home placement, will have to relinquish his routine and the ocean mural on the bedroom wall of the only house he’ll ever remember, and make his way in a group living situation.

I have read and spoken to so many parents who are keeping their kids until the very last second.

I have read and spoken to so many parents who want their kids in a residential placement as soon as possible both for their ability to be as independent as possible, and for their own freedom as well.

I don’t believe the first group are martyrs.

I don’t believe the second group are callous parents.

I think in some cases it’s easy to see what’s best for both the adult child, and the parents.

I think in some cases it’s near impossible.

Impossible for us because I know in my heart he wouldn’t want to change a thing over his eighty-something years, and that is just not an option.

Despite the fact that I’ve been told my choices (short of winning the big lottery) are ridiculously limited, I know I have to start thinking about these issues and how best I can prepare Justin for such a tremendous move.

Given that he’s only spent about a dozen nights out of his own bed in the last ten years (yay Disney!) I’m pretty sure I need to step up my game and address this first.

Since one of the biggest challenges for Justin living away from us will be sleeping in a new environment, I know I’ve got to create other opportunities for him. A lovely fellow autism mommy mentioned a local camp that does both day camp and sleepovers, and trusts them implicitly.

I can tell you when we spoke about it my heart both lurched and soared simultaneously. Would he sleep at all? Would he find it even the tiniest bit fun? Would I get to go out?

Would he understand that I’d come back for him?

To say that I’m not sure how this will go would be a massive understatement, but I’ve decided I’ve got to give it a try, and for as long as the camp is willing, keep trying. I’ve got to expand his horizons. He has to try new experiences that will set him up for success in adulthood.

He’s got to see that as long as I’m able, I’ll always see him again.

Summer camp is just a few short months away, but it will be here before we know it. Wish us luck. And if you’re like me, in a situation where you’re child’s adulthood is on the horizon and you want to start preparing him or her, now’s the time to push the envelope. Take some risks. See how far you can stretch them.

Who knows. Maybe we’ll all be happily surprised.

My fingers are crossed.