Meet Scott Rubin, inspiration for Autism After 21, and his mom, Michelle, the oganization’s founder 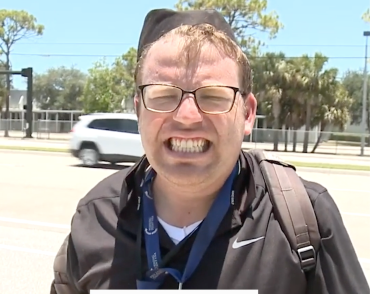 Necessity was the mother of invention for Michelle Rubin. She knew her teenage autistic son, Scott, was not college-bound. But she knew he would contribute to his community and live a productive life. So in high school she started building his resume with all his activities. As a result, today Scott is 30-years-old, has a decade of work experience behind him and is looking to move out on his own.

Along the way, Michelle built Autism After 21, to help other autistic young adults transition to employment. Autism Speaks awarded the organization two grants for its efforts, including most recently in 2019 for its SOAR program.

I began building a resume for my son Scott, who was born with autism spectrum disorder, when he was in high school. I knew he was not college-bound. So I started preparing him for a future in employment. I chronicled everything from classes, sports, Special Olympics, awards, work training, and even computer programs he knew to use. For families of autistic students still in high school, my advice is to start building a resume now by volunteering and becoming a part of clubs or organizations.

Based on our experience, I founded the non-profit Autism After 21 when Scott was 18 to provide education, mentorship, advocacy, employment and social opportunities to other young adults with autism spectrum disorder. Our signature program SOAR – Summer Opportunity for Adult Readiness – is a 12-day, residential, job-readiness program held on college campuses. Our curriculum focuses on pre-employment training, career exploration, self-advocacy training, independent living, financial management, and social skills.

Scott’s first job was with a neighbor’s business that focuses on reusable plastic tags used in retail. I asked him if there was anything in their process that Scott could possibly do. I went and visited the plant and we found job tasks that were a fit. Scott now works there part-time.

In 2018, a friend who does marketing and PR for a local restaurant here in Florida, Rocco’s Tacos, told me about the possibility of an opening for Scott. He took a resume that I helped him write, he presented it to the chef and manager at the interview and he got a job as a dishwasher.

But he is more than that. Scott has taken it upon himself to fill some tasks on his own after seeing a need, including taking out trash and restocking dishes for the chef and bartenders. Scott likes to be helpful.  His ability to figure out what someone in the restaurant needs that he can do makes him proud and feel like he’s part of the team, like when he can refill glasses for the bartender, dishes for the chef etc.  The chef reports he will turn around and Scott will have emptied his trash without him even seeing Scott do it.  He just does it without being asked.

My experience has been supports are needed in the beginning, especially finding the businesses who are willing to hire. We went to Vail for the summer and were able to find a restaurant that was willing to give Scott ac chance even though they had never hired anyone with a disability before. He successfully worked there for seven weeks.

Resume writing for a young man of Scott’s academic ability must be done with assistance from others.  Job coaching in a new position can make or break the success and longevity, also gives the employer some confidence. Employers can be hesitant to bring someone into the workplace when they have no experience with adults on the spectrum.  Assuring them they have supports really helps. Training staff what to expect so natural supports can develop is vital.

The job interviews can be difficult. Scott’s speech can be difficult to understand if you don’t know him. So I facilitated his job interviews. He also had a job coach from med waiver at a previous restaurant job prior to the one at Rocco’s. He was able to transfer those skills to Rocoo’s without a job coach.  He went in on his own, got trained and has been successful ever since. Besides typical onboarding paperwork, Scott had training for the automated dish system from another staff member. It helps that he maintains the same schedule every week.

Scott has gotten very good at self-advocating for himself when he needs something. The team at Rocco’s Tacos is also very supportive of him, jumping in to help when he needs it or when he asks. The staff reports he brings an energy to the workplace that they never experienced before. They even say it is hard not to be motivated when Scott is working. The social interaction is by far his favorite part of the job.  Making money doesn't motivate him.

Scott can stay home alone and watch the dog. Scott also takes great pride in commuting to work independently, even when I am out of town. He has mastered using his bike and public transportation to access his jobs.  Currently he is asking for an apartment, and I am trying to figure that out! His life is limitless with independent living ahead for him.

To parents of young children on the spectrum, the journey has been unexpected and full of highs and lows. Given the diagnosis of moderate-severe autism over 25 years ago we never dreamt Scott would be living such an independent life.  Looking back, I would tell parents, it’s not as bad as you think. It’s like living with an angel.