The brown-eyed boy in the video is 13 months old. He wears overalls and a blue-striped shirt and sits on his mother’s lap. On the table in front of them is a green washcloth. The boy picks it up and swings it near his ear as if he were guessing the contents of a Christmas present.

Across the table, a psychologist with the University of North Carolina-Chapel Hill takes notes.

“Have you noticed him swing a washcloth like that before?” the psychologist asks.

“He swings everything,” his mother replies.

“It used to be a pacifier or anything with a ring. He hangs it on his thumb and swings it back and forth."

“And he would swing it constantly?”

The psychologist offers toys, initiates games and makes exaggerated gestures and sounds, all while taking notes on the child’s responses – looking for signs of typical versus atypical development.

The video described above is playing out on the computer screen of UNC clinical psychologist Lauren Turner-Brown, Ph.D. Dr. Turner-Brown is part of the Early Development Project, which is testing how well a new early intervention program lessens the severity of symptoms in infants flagged at high risk for developing autism. The current phase of the research, funded by the Institute of Education Sciences, is led by Linda Watson, Ed.D., and Elizabeth Crais, Ph.D., and also includes developmental psychologist Grace Baranek, Ph.D., and Steve Reznick, Ph.D. All are team members in UNC’s Program for Early Autism Research, Leadership & Service (PEARLS).

“All kids do some funny things,” Dr. Turner-Brown says of the video. “So it’s not that this particular behavior is all that unusual. But you can see that it’s causing a problem for him developmentally because it’s interfering with his ability to do other things. He’s not babbling. He’s not listening. He’s not looking at his mom or sharing his experience with her."

In the video, the psychologist opens a board book and points to a picture on the page. The boy picks up the book and shakes it near his ear.

Dr. Turner-Brown is particularly adept at noticing the absence of typical behaviors in babies who go on to develop autism or another developmental disorder. She is one of dozens of researchers at UNC and across the country who are trying to detect hints of autism in babies.

In the United States, the average age of diagnosis with an autism spectrum disorder (ASD) is around 4 years of age. For many years, doctors and scientists alike thought the disorder couldn’t be identified much earlier than age 3. 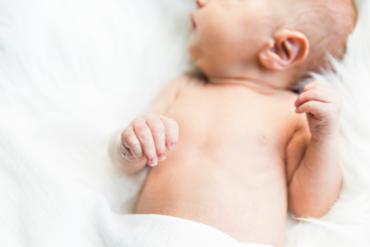 “Ten years ago, 2 years old was considered young for detecting kids at risk for autism,” says Dr. Baranek, who led the first phase of the Early Development Project, funded by Autism Speaks. This project was one of seven related studies funded by Autism Speaks in 2007 with the aim of gauging how early intervention with children 12 to 26 months of age can improve developmental outcomes. Together, this group of projects makes up the Toddler Treatment Network, which focuses on parent-mediated interventions that allow therapy to be continued in the home.

Research is continually overturning old assumptions about the age at which the warning signs of autism – both biological and behavioral – begin to emerge, says Autism Speaks Chief Science Officer, Geri Dawson, Ph.D. “The hope is to enroll these infants in early intervention programs that can dramatically improve their outcomes,” Dr. Dawson explains.

Currently, the American Academy of Pediatrics recommends screening all toddlers for autism at ages 18 and 24 months. Still, a growing number of researchers believe that screening can and should start even earlier for infants known to be at high risk for autism. These high risk infants include the younger siblings of children already diagnosed with ASD.

Dr. Baranek is among the pioneers of very early detection. In the late 1990s, she began collecting home videos of 9- to 18-month-old babies, some who later developed autism and others who didn’t. Previous studies had shown that parents of children with autism often began reporting concerns around or before the first birthday. Other studies of high-risk baby siblings, an area of research given special support by Autism Speaks, found that many of those who would later develop autism lacked typical social skills at 1 year of age. For example, many were not pointing at objects or mimicking their parents.

Dr. Baranek hoped to create a list of behavioral clues that would enable pediatricians and other healthcare providers to screen high risk infants reliably. She scoured the videos, noting hints of social

interaction, repetitive actions and indications of unusual levels of irritability, clumsiness or sensitivity to sound or touch. These videos provided behavioral markers that might indicate which babies would develop autism and which would not.

“One of the things that was surprising for me was that I expected the signs would be more obvious than they were,” Dr. Baranek says. Still, on careful inspection the subtle clues were there, she says. Moreover, they weren’t restricted to just social development.

From her findings and those of others, Dr. Baranek and her PEARLS colleagues created a 61-item parent questionnaire that could be scored and used to flag young infants at risk for autism. They developed this First Year Inventory specifically for infants younger than 12 months. It includes such questions as:

* Does your baby turn to look at you when you call your baby’s name?

* Does your baby seem bothered by loud sounds?

* In new or strange situations, does your baby look at your face for comfort?

* Is your baby content to play alone for an hour or more at a time?

Drs. Baranek, Turner-Brown and their colleagues are preparing to publish a study that demonstrated the screening tool’s effectiveness with nearly 700 babies. It flagged 15 babies as “high risk.” Of those, 12  went on to be diagnosed with a developmental disorder, including five with an ASD. All 12 stood to benefit from early intervention therapies. On the downside, however, the screen failed to flag four babies who nonetheless developed an ASD.

In a follow-up study funded by Autism Speaks, the PEARLS researchers are refining the First Year Inventory and broadening its use for a wider age range of children. Meanwhile, they continue to use the current questionnaire to screen 1-year-olds in the local community, inviting “red flagged” families to participate in an ongoing study of early interventions.

So far in the current phase of the Early Development Project, the research team has recruited an additional 40 families and hopes to recruit at least 70 more. The families are randomly assigned to one of two groups. About half are referred to established community services such as speech and occupational therapy. The other half are enrolled in a new program called Adaptive Response Teaching (ART). It includes six months of weekly home visits from a trained therapist who works directly with the baby’s parents.

“We’re trying to get the parents to change the way they engage and play with their kids in order to target some of the areas where the kids are showing weakness,” Dr. Turner-Brown says. If a baby is not imitating sounds, for instance, the therapist will suggest ways for parents to help the baby develop this skill during the course of their daily routine (bathing, eating, reading, etc.).

It’s too early to ascertain how this intervention will change outcomes. But the results from the first phase of the Early Development Project – with 16 families – were encouraging. It allowed Dr. Baranek and her colleagues to refine their project and to prove its worth to the Institute of Education Sciences, which is funding the current larger study.

“How do we know for sure if we’re preventing autism or if a child was never going to develop it to begin with?” Dr. Baranek asks. To help address this conundrum, some researchers are looking for answers in the brain.

Across the street from Dr. Turner-Brown’s faculty office, neuroscientist Joseph Piven, M.D., and his team are studying brain activity in younger siblings of children on the autism spectrum. These infants are part of the larger Infant Brain Imaging Study (IBIS), supported by Autism Speaks and the National Institutes of Health.

“We want to know, do brain changes happen hand-in-hand with behavioral deficits that emerge in early infancy?” says IBIS team member and educational psychologist Heather Hazlett, Ph.D. “For example, do you see brain differences emerge at the same time that you don’t see joint attention developing?”

months). They participate in video-recorded behavior assessments. Then, after a parent helps the baby fall asleep, he or she is fitted with noise-reducing headphones and slipped into the “donut hole” of an MRI machine in a darkened room. An attendant gently rests her hand on the baby’s chest to monitor comfort throughout the 45-minute imaging session that follows.

So far, the images that have emerged from these sessions are striking in what they suggest. In a recent paper, Dr. Piven and co-authors (including Autism Speaks’ Dr. Dawson) describe clear autism-associated differences in brain development starting as early as 6 months. These differences involve nerve fibers that connect one region of the brain to another. It is possible that in infants who develop autism, these pathways do not develop normally, Dr. Piven says. The abnormalities may interfere with the brain’s ability to coordinate activity between different brain regions. This, in turn, may lead to the social and sensory problems associated with autism.

These “on average” differences emerge when looking at large numbers of infants, Dr. Piven explains. But they are not diagnostic when applied to any one child. Some infants with normal patterns of brain development nonetheless develop autism, he explains. Others with atypical patterns do not.

For these reasons, it is too early to use brain imaging as a screening tool. However, refinements might lead to MRI screening that could flag high risk infants in the future. Such a “biomarker” might also give researchers a way to measure the beneficial effects of early interventions or new medicines being developed to relieve autism’s core symptoms, Dr. Piven says.

“We hope that with our help, it will be more.”