How an iPhone taught my son self-sufficiency 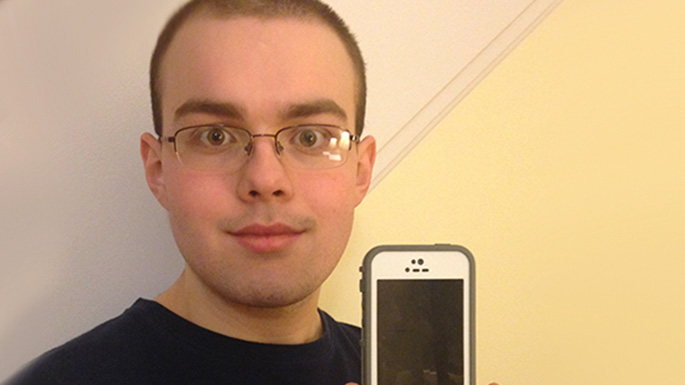 This guest post was written by Lisa Vaillancourt, the very proud mother of two handsome, successful young men. Patrick is a 20-year-old college junior. He is a loving big brother to Alex, 18, a recent high school graduate who is now employed part-time and also volunteers at two different libraries ten hours a week. Oh, Alex also happens to have autism.

I’m probably the only mother on the face of the planet who doesn't say to her kid, “Put away that phone.”  No, really.  I’m THRILLED to see Alex’s eyes down, scanning his screen and doing what almost every other 18-year-old in the world is doing! In fact, it took us over a year to convince him that he should have a phone.

It’s an understatement to say that our guy is a creature of habit. To put this all into some perspective — just the change of seasons used to elicit massive anxiety attacks. Sameness keeps his life, his entire being, calm. He still has a Gameboy that he’s had since his 9th birthday. We bought him a Nintendo DS several years later so he could upgrade. He thanked us, but made us return it. He recently purchased a new screen for the Gameboy. After he finished installing it, he said, “Look. Just like new.”

He still has a portable CD player. Many years ago we tried to show him how much easier it would be to have an iPod — that he wouldn’t have to lug around a case of CDs, worry about batteries, etc. We even had his brother download a video onto his iPod so that Alex could see that the possibilities went far beyond music. We basically had to force him to sit and watch ten seconds of it. “No, thank you.”

A few years ago we started to plant the seed of making a phone part of his life. He was almost seventeen and our desire for him to have it was primarily to increase his independence and for safety. We wanted him to be able to go to a different aisle of the store without one of us hovering near him all the time. He wanted no part of it. “No, thank you. I’ll be fine.”

Then his brother, Patrick, got an iPhone. Alex loves his big brother, but technology always seems to bring their interactions to a whole new “cool” level. Just as Patrick had gone to Alex for his photography and videography expertise when setting up his business, so Patrick became the go-to guy for Alex’s iPhone questions. I think the day that changed his entire outlook was when he saw Patrick looking online for a better price of an item while we were standing in the aisle of a store. For a kid who loves facts and information, the possibility of having the internet at his fingertips 24/7 was the Holy Grail.

Shortly after his high school graduation last spring, Alex came to us and said, “I think I’m ready for a phone.” He has had his iPhone now (that he paid for himself) for about seven months. You might recall that I described him as being calm when things are status quo. Well, not long after purchasing his iPhone, the upgrade message from iOS 6 to iOS 7 popped up and Alex clicked on it. He was consumed with anxiety when he saw that the look of his phone set-up and apps changed. He spent a lot of time researching how he could go back to iOS 6, watched tutorials, and probably would have taken the phone apart if he had found some directions telling him that would bring it back to how it was when he bought it. It was not a happy scene in our house.

Several weeks later, with Alex standing in the room, I finally called Apple customer service, explained my unique situation, and asked the tech to give me specific, logical reasons why my son should not go back to iOS 6. Give the kid the facts, especially if they include possible security threats to his phone and its contents, and then he’s able to at least try to calm down to consider the options. Thank you, Mr. Apple tech for saving my life that day and easing my kid’s anxiety.

You might recall I said that one of the reasons we wanted him to have a phone in the first place was to become more independent. How’s this for being self-sufficient: Several weeks after he bought his phone, he and I were on a trip. We had stopped into a bookstore and were standing in line so he could pay for a book. I saw him looking at a rack of gift cards. He chose a $50 iTunes card, turned to me and said, “I’m using my own money to buy this so that I can get apps for my phone.”

One of his apps scans food nutrition labels. For the past year, he has maintained a 65 lb. weight loss. I can’t tell you how many people have asked him his secret. “Eat less. Exercise more,” is always his matter-of-fact answer. It appears that the apps keep him on track as well.

Just the other day he informed me that he needed to buy another iTunes card to put on his account.  He doesn’t drive yet (that will be another story for another milestone, I’m sure) so I took him to the store to buy it. By the way, he completes these transactions entirely on his own. I’m thrilled that he stands in line, waits his turn, carries on a polite conversation with the cashier, produces his payment and counts to make sure he’s received exact change. This took several years to teach him. Now, he’s using these skills to buy something that makes his life enjoyable and useful. This makes me giddy!

While I sometimes feel very guilty for some of the traits my kid inherited from, or adopted by, watching yours truly, I am quite proud of the fact that he is a bargain hunter. Recently, he, his dad and I were looking for a replacement screen for his electric shaver. Dad and I were ready to buy a whole new shaver (same exact model because we know our kid), since the replacements screen/blades were almost as expensive. He wanted no part of the new shaver and was ready to make his case. He got on his iPhone, searched replacement screen/blade kits, and found one for half the cost with free shipping on Amazon. We ordered it when we got home. THAT’S my boy!

The moral of this story is that it has taken sixteen years of good, old-fashioned hard work and determination for Alex to finally reach the point where, on his own, he can make the call (pun intended) on when he’s ready to tackle something new. There will never be an app for that.