His first hero, his first friend: My son's big brother

This blog post was written by Kathy Hooven, mother to a son with autism. You can read more about Kathy and her family on her blog, "The AWEnesty of Autism." You can also follow her on Facebook. 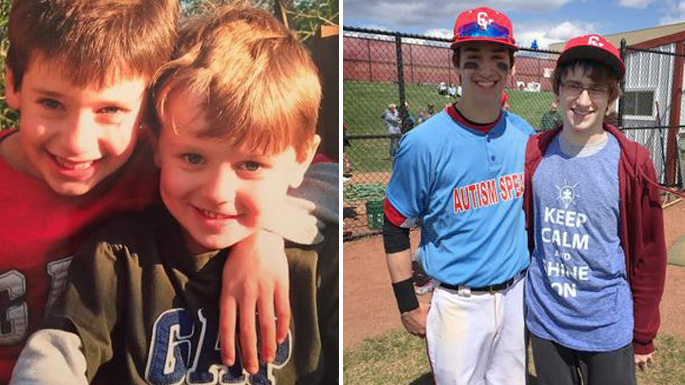 It's been years since your little brother Ryan has called you Brubby. I remember the sadness and shock that swept over your sweet face when Ryan, who struggled to find many words, finally found the word Kyle for the first time. You always loved that you had a special name, a name that was from him to you and only you. Even though "Brubby" has faded over the years, your brother's love, his admiration and his connection reserved especially for you, has not.

Your brother's love for you is a unique love he shares with no other because not only were you his "Brubby", you were his first. His first...for almost everything.

You were the first person who ALWAYS saw what he needed, what was bothering him, what he was trying to tell us because you saw his struggles as a loving brother not as a worried parent. You didn't worry about "why" he was struggling, you only saw that he was and you tried to fix it. "Mommy, Ryan doesn't like the tag in his shirt." "Mommy the intercom is too loud and it hurts Ry-Ry's ears." "Mommy the sun is too bright and the wind is too blowy, that's why Ry-Ry is crying."

You were the first for hair cuts and dentist appointments and shots in an attempt to convince your brother that even though all of those things were hard for him it wasn't going to "kill" him as he often shouted it would. After you hopped down from the chair you would race to your brother and say, "I know it looks scary Ry-Ry, but, you can do it" as you stood by watching and hurting as he hurt.

You were the first to "communicate" with Ryan by scripting back to him as he repeated favorite lines and sayings from all his treasured television shows, video games and movies while the rest of us worried he wasn't "talking". "10,000 BDI towels, ah-huh"was Japanese for something in Sonic the Hedgehog, but, none of us knew what it meant, but, clearly it did not matter to you as the two of you raced around the house shouting it from one floor to the next.

You were the first to help his literal mind understand that idioms and slang can be fun and understood. "What's up douche?" may not be my favorite slang term you taught him as a teenager, but, when he used it properly by walking in the door and addressing you and your friend as a feminine hygiene cleaning product, I nearly died laughing, as did you. Your brother was quite amused with himself too.

You were the first to prove to him that a label did not change who he was and that a label did not define him. You pushed him, pulled him and treated him like any brother, not a brother with autism. When the occupational therapists called to say Ryan had a seizure at camp due to completely shutting down after falling off a swing, you very calmly told all of us "Nah, he didn't have a seizure, he does that every time I hit him in the head with a ball" then you proceeded to help me lift him off the floor.

You were the first to help me see that autism did not cause you to "miss out" on a neurotypical brotherly connection and that seeing the world through your brother's eyes is a gift he has given to you. When given the opportunity to select a hero for a school writing assignment, you did not choose Jackie Robinson or JFK, you chose your brother and your words were as beautiful as you: "I strive to be like Ryan by treating others as well as I know how, getting through tough situations and excelling in situations that come easily to me. He is an amazing individual and I will always look up to him."

The nickname "Brubby" may be long gone from your brother's mind, and he would now think that calling you such a name when he was young made him an "utterly ridiculous child", but, the love behind "Brubby" will always be fresh in his heart. Because you, my sweet Kyle are his brother, his mentor, his hero, his best friend....his first. And although he may not say it, I know he feels it.

Just last week your brother and I were talking about your college plans and I saw a tear escape from the corner of his eye and in his best Jim Carrey Grinch voice he dabbed at the tear and declared, "I'm leaking".

When we take you to college this summer, as we pull away from the dorm rooms, trying so hard not to look back and only look ahead, no one will "leak" more than your brother and me because for both of us, dear "Brubby", you were our first.

Autism Speaks offers a Family Support Tool Kit with sections for parents, grandparents and siblings. The purpose of each kit is to help teach family members and friends more about autism and its effects on families, and provide resources and support to enable them to lead happy and successful lives with their loved ones with autism. Read more about the tool kit here.