Helping shape the way characters with autism are portrayed 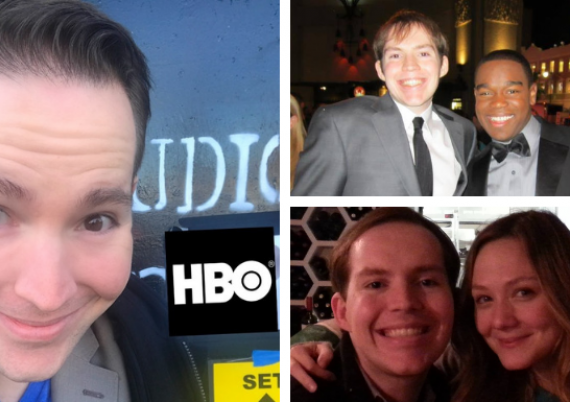 As someone on the autism spectrum who loves theater, I hope this is something I can continue do for many years to come.

Being diagnosed with severe autism at 4, my first opportunity to ever be on stage was performing a song from The Lion King at a JCC camp in New Jersey. Dealing with sensory challenges with bright lights and loud noises, this was a tremendous challenge for me but there was something soothing about music that made it tolerable.

My parents took this love and nurtured it to become involved with theater and music therapy. From 4-19 I performed in over 20 plays and it shaped the person I am today while conquering many of my sensory and social challenges.

This helped me once I got to college to start speak out about my autism diagnosis in the hopes of becoming an autism advocate. When I started writing about theater therapy, I got my first big break in the entertainment world working for a film called Joyful Noise in 2011 starring Queen Latifah and Dolly Parton. I was asked by the director of the film to come onto the film to review the script as one of the characters in Walter Hill, a 14-year-old boy had Asperger’s Syndrome, a form of autism. He wanted the character to be as realistic as possible. When he sent me the script I did a rewrite within 2 days where a week later we were having lunch in NYC discussing the rewrites and how I could come on as the autism consultant.

After the film was released and I got to go to Hollywood for the world release I was hooked. This led to me wanting to continue my work in the entertainment industry. I’ve helped with rewrites of characters, casting, production advice, education of autism and much more. A few years later I worked on the film Jane Wants A Boyfriend that features a character with autism trying to find her first-time relationship. I got to work closely with the lead character to discuss autism, dating & relationships based on my experiences trying to find love on the autism spectrum.

Finally, a short time ago I was asked to come on as the autism consultant to a new series coming to HBO called Mrs. Fletcher that is based off the book from the NY Times Best-Selling Author Tom Perrotta. The TV series when it airs will feature a character with autism.

There’s been so much I’ve learned while working on these projects. Here are some of my biggest takeaways…

We need more representation from our disability community in our entertainment industry.

From disability advocates such as RJ Mitte (Breaking Bad), I’ve learned that there aren’t enough actors with disabilities getting the opportunity to audition to play disabled characters. Networks such as CBS are now making it a requirement to audition disabled actors for disabled roles. This is a huge step in the right direction for our community. We also need more self-advocates in consultant/advisor roles as well to provide their expertise to make portrayals realistic.

How giving back is important.

I’ve always believed in the importance of giving back and working in the entertainment industry has reinforced this. Some of the best projects I’ve worked on have volunteered to give back in the community and/or provide a portion of their proceeds to give back to autism-related charities. This added element is why I’m proud to work in this field today.

The need for more screenwriters to discuss neurodiversity.

While remakes, prequels, sequels etc. are ok in some cases, I still see a lack of original ideas being presented to the entertainment world when it comes to disability. With 1 in 5 Americans having a disability, we need to see more roles featuring characters our community can relate too. I’m currently writing for my own idea for a film for a character with autism. Self-advocates I mentor and coach who I work with have sometimes had success in STEM jobs. Others I’ve worked with though have also had similar success in the arts. I now like to call STEM STEAM (Science, Technology, Engineering, Arts & Mathematics). I hope we can continue to spark their creativity and we will soon see their names in lights.

As Temple Grandin one of the leading autism advocates says, “Interests and talents can turn into careers” and I’m happy that one of my interests in theater has turned into a part of my career today. I hope that any person with autism who is reading this that you continue to nurture your strengths and interests to go after whatever you want to do in this world.