He is one lucky boy to be your son: A letter to an autism dad 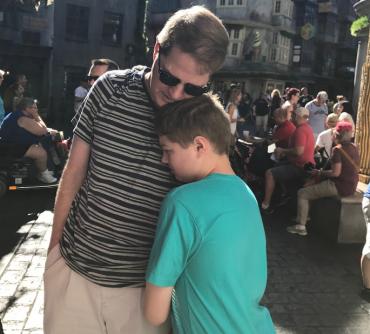 It is sixteen years ago this month that you became a Dad. And while up until then I’d done most of the work, that dynamic changed the moment your first son came into the world.

My friends had told me to give you a couple of jobs (middle of the night feeding being a favorite), just so you had “ownership” of something related to our boy.

It wasn’t necessary. You’ve been there for him, and for me, every step of the way.

I know things haven’t turned out exactly how we planned. Somewhere in a parallel universe we still live in Washington, DC, we both work, and our two kids, two years apart, are a teen and a tween respectively and driving us crazy with their backtalk (okay, that still applies to one of our kids). Nowhere in “What to Expect When You’re Expecting” was there anything about sleepless nights for a year, reflux that just wouldn’t quit, a general extreme crankiness that defied all logic (that often extended to us too), and a penchant for spinning things that also defied logic (and often gravity).

I know there have been days with Justin that have just completely broken your heart.

And yet, you never give up trying to give our son, and our family, the best life possible. 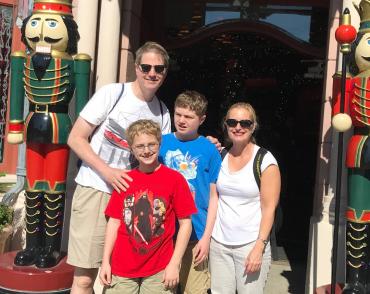 When our boy was diagnosed at the tender age of seventeen months and we found out Early Intervention in Virginia is a travesty at best, you figured out a way for me to quit my job and do dozens of hours of therapy with him until he could start school. When we realized the school program wouldn’t be right for him (and I began to burn out on ABA) you figured out a way for us to move to Jersey, a chance to give our boy some amazing therapists, a great school program, and proximity to relatives and friends who could help.

I truly don’t know how we would have made it those first few years without that bold move.

We’ve had so many decisions to make over the years, some of them soul-suckingly hard. Where to live. What school placement to put him in. What ancillary therapies to provide him. What medications to try, and try again. Which doctors to take him to for first, second and third opinions. Whether or not to have another child (we did, and happy to say, it worked out). Hell, just for dealing with our insurance companies you deserve a medal.

You’ve been there to help me with all of them.

You have listened when I poured my heart out to you about my quandaries around inclusion, my desire to give him a hobby other than technology, my drive to take him out into the community even when it wasn’t pleasant. You have held my hand when I’ve had to let many of our dreams for Justin go, and helped me rally to remember all the good things he has in his limited, but generally happy life.

You have been my sounding board, my sanity, my friend.

Perhaps most importantly, you learned how to be a part of Justin’s world, meeting him on his terms, which has forged such a close bond between the two of you. He loves when you echo his favorite lines from “Up,” adores when you scratch his face with your five o’clock shadow, treasures those moments of “snuggle time” on the couch.

He loves you, truly and deeply, with a connection forged in your relentless pursuit to bond with him.

He is one lucky boy.

I am one lucky wife.

From Zach, Justin and myself, Happy Father’s Day my love.