Advice from an autism mom: Don't give up, just get out! 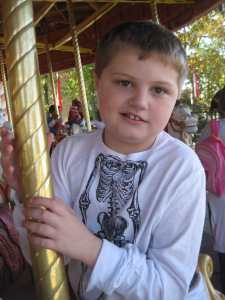 My husband Jeff and I have two sons, an almost fourteen-year-old and a ten-year-old, both with autism. My eldest is on the more severe end of the spectrum, and also has a diagnosis of OCD. My youngest is on the milder end, and has a secondary diagnosis of ADHD. For the most part, they are both happy, successful in school, and the two most loving children any parent could ask to raise. At this point you may be rolling your eyes, or maybe you want to know our secret. Friend, I’m going to tell you. Ready for it?

It’s simply this- get them out.

If you’re reading this with an autistic toddler clinging to your leg because you have the audacity to want to put him in the car for a ride to the park, you may not feel really receptive to this advice. I know, and I get it- I was you twelve years ago. The first year Justin screamed any time we put him in the car (turns out he hates facing backwards, at least that issue was solved on his first birthday,) so outings were fraught with trauma before we even went anywhere. The only time he didn’t cry when we left the house was when I put him in his stroller and took him for a walk, which in Virginia meant several months in summer or winter where that was impossible. I remember thinking at one point that a person who weighed less than my left thigh was keeping me prisoner in my own home.

Yup, the left one’s bigger than the right. Must be a running thing.

After a period of time where I truly felt I’d entered a witness protection program I decided our strict quarantine had to go, and we began our ventures out. I chose our local mall as our battle ground because we could ostensibly go there year round, and at the very least I could attempt to get a drink at Starbucks.

I have my priorities.

At first Justin hated every aspect of our “stimulate the economy” excursions. Knowing this, I started small. The first time we went I just drove him to the parking lot, parked, then went home. The next time we made it to the stroller, and to the closest mall entrance. The next time, we made it inside for one grand loop of the first floor.

Eventually we even conquered elevators. It was a momentous day.

The mall taught me a lesson I applied to many more situations with Justin, and eventually with my younger son Zach when he was diagnosed. Something in me knew that the more times I got out with them when they were younger, the more they’d get used to trying new things. The first time Justin sat on a horse he whined and protested the entire fifteen minutes around the ring. Something inside me told me to pursue this, and while the first month of lessons were hell, nine years later his half hour on a horse is his favorite thing of the week.

It’s one of my favorite times too. It feels like victory.

Of course, exposing my boys to different opportunities is far from the only reason they’re mostly happy in their environments, and usually open to trying new things. Both boys have had years of special education instruction, occupational therapy, physical therapy, and speech therapy. My eldest has had a private ABA tutor since he left Early Intervention. My youngest is on the “autism diet,” which we think helped him immeasurably. My husband and I have tried our best (and not always succeeded) to be patient with them, and we’ve had help from family and friends.

There have been many factors that contributed to who they are today, but I truly feel that getting them out young ans conditioning them to the community is one of the biggest reasons they’re mostly at peace with themselves and the world at large. It wasn’t always easy. I have tiny scars on my shoulders where Justin’s teeth expressed their displeasure at having to wait on line at the boardwalk. I distinctly remember packing a young Zach up one morning five minutes after we’d made it to the beach because a fly landed on his foot, and he became hysterical.

But we perservered, and now my sons have many more options on their life menus. It’s still difficult to keep my son at a relative’s house for more than two hours- we often end a visit with my boy unceremoniously dumping my purse on my lap so I’ll take him home. He has severe autism, so sometimes there are limits to what we can do. I’ll admit I held my breath when we took him to Disney four years ago, but darned if the kid didn’t make it almost eight hours each day in the park.

Given how expensive those tickets are, I can honestly say those days really were magical.

Whether your kid has just gotten a diagnosis or you’re a few years in, don’t give up on getting him or her out in the world. Ask for help anywhere you think you can get it. If a random neighbor offers assistance, have her accompany you somewhere so you have an extra pair of hands. Even if the outing is a disaster wait a while and try again- I can’t tell you how many times I attempted a trip with Justin that at first made me long for a glass of wine but eventually ended in triumph. Make sure you have a plan B and C for every time you venture out, and if necessary, try your trip in segments so that your child becomes accustomed to where you’re going.