What are the DSM-5 diagnostic criteria for autism? 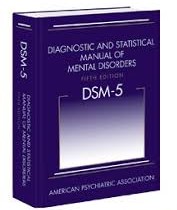 In 2013, the American Psychiatric Association released the fifth edition of its Diagnostic and Statistical Manual of Mental Disorders (DSM-5).

The DSM-5 is now the standard reference that healthcare providers use to diagnose mental and behavioral conditions, including autism.

By special permission of the American Psychiatric Association, you can read the full-text of the new diagnostic criteria for autism spectrum disorder and the related diagnosis of social communication disorder below.

A. Persistent deficits in social communication and social interaction across multiple contexts, as manifested by the following, currently or by history (examples are illustrative, not exhaustive, see text):

Specify current severity: Severity is based on social communication impairments and restricted repetitive patterns of behavior. (See table below.)

B. Restricted, repetitive patterns of behavior, interests, or activities, as manifested by at least two of the following, currently or by history (examples are illustrative, not exhaustive; see text):

Specify current severity: Severity is based on social communication impairments and restricted, repetitive patterns of behavior. (See table below.)

C. Symptoms must be present in the early developmental period (but may not become fully manifest until social demands exceed limited capacities or may be masked by learned strategies in later life).

D. Symptoms cause clinically significant impairment in social, occupational, or other important areas of current functioning.

Note: Individuals with a well-established DSM-IV diagnosis of autistic disorder, Asperger’s disorder, or pervasive developmental disorder not otherwise specified should be given the diagnosis of autism spectrum disorder. Individuals who have marked deficits in social communication, but whose symptoms do not otherwise meet criteria for autism spectrum disorder, should be evaluated for social (pragmatic) communication disorder.

A. Persistent difficulties in the social use of verbal and nonverbal communication as manifested by all of the following:

B. The deficits result in functional limitations in effective communication, social participation, social relationships, academic achievement, or occupational performance, individually or in combination.

C. The onset of the symptoms is in the early developmental period (but deficits may not become fully manifest until social communication demands exceed limited capacities).