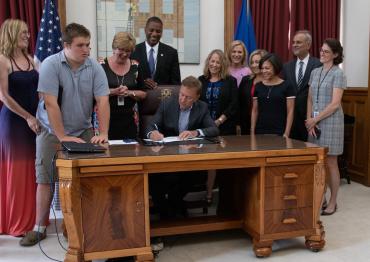 On June 21, Governor Ned Lamont signed Substitute House Bill 7168, which lowers the age that transition services begin to age 14. Connecticut previously did not begin the transition process until age 16, which is far too late for most students with autism and much later than when other states begin.

Transition planning for students diagnosed with autism is critical to their success in adulthood. Each year, approximately 70,000 children with autism graduate from high school and face a “service cliff”. Early planning for this transition into adulthood is key to achieving goals in continuing education, employment, independent living and community participation.

Connecticut autism advocates have dedicated several years of advocacy to this legislation and advancing support for young adults with autism. We are thankful for their dedication and the leadership of Representative Catherine Abercrombie in championing this milestone in transition services. We will continue to work in Connecticut on the implementation of the new law as well as the enhancement of other transition services across the country.

Blog
Transition to college and beyond: A personal story

Expert Opinion
Finding an autism-friendly OB-GYN
We're Here to Help Chat with Us
Autism Response Team Chat
There are no available agents at the moment.